A storm tracking through the southern United States will pack heavy rain that will hinder post-Thanksgiving travel and could trigger urban flooding in Houston, Atlanta and New Orleans, AccuWeather meteorologists say. The same storm will also unleash months' worth of snow on the higher elevations of New Mexico and western Texas into the Thanksgiving weekend.

Rain will be the most widespread inhibiting factor for travel in the region. Thunderstorms are likely to be heavy and gusty at the local level, but any severe weather is likely to be isolated.

The first batch of rain unloaded 1-4 inches of rain with locally higher amounts from southeastern Texas to southwestern Louisiana from Thursday to early Friday. That initial batch of rain exited the North Carolina and Virginia coast on Friday afternoon. 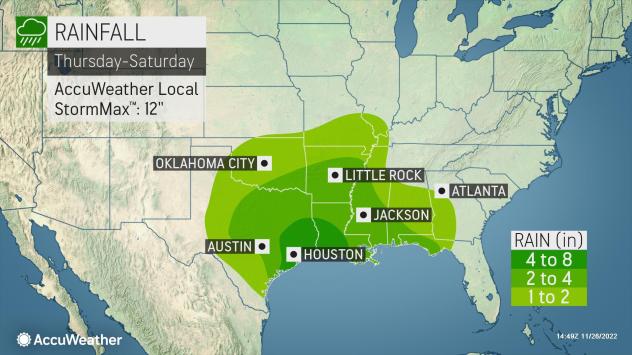 A second batch of rain will overspread the South-Central states and part of the Southeast about 24 hours after the first batch and essentially from later Friday to Saturday night. Heavy rain had already begun to drench portions of southeastern Texas and southwestern Louisiana as of early Friday night.

A broad area of 2- to 4-inch rain is in store from central Texas to southern Mississippi and the Florida Panhandle from the double-barreled storm system through Saturday, with an AccuWeather Local StormMax™ of 12 inches most likely to fall in southeastern Texas and/or southwestern Louisiana.

The second batch of rain will bring a more thorough soaking to portions of Georgia and the Carolinas from late Saturday to early Sunday.

In addition to the rain farther east, a pocket of snow developed as anticipated over portions of eastern New Mexico and western Texas late this week. However, marginal temperatures limited the amount of accumulating snow in lower elevations on Friday. 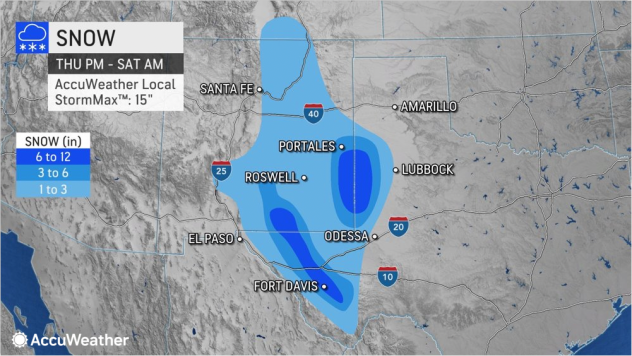 The heaviest snow is likely to fall along the Texas and New Mexico border through parts of southeastern New Mexico into early Saturday.

Motorists should be prepared for slippery travel along interstates 10, 20 and 40, as well as U.S. Route 283 in western Texas. In New Mexico, wintry travel is likely over portions of Route 283, I-25 and I-40. Road conditions will range from wet to slushy to even snow covered in some areas. 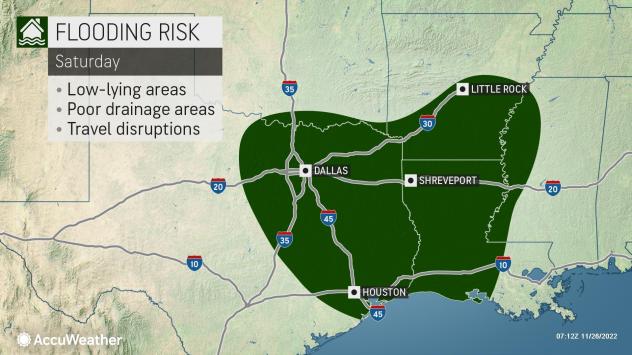 As this main part of the storm rolls northeastward into Saturday, a new batch of rain will move slowly along. While the intensity of this rain will vary from location to location in the Southern states, a new round of poor visibility and ponding on the highways is likely to occur along the interstate 10, 20 and 40 corridors.

Downpours and thunderstorms will shift from eastern Texas and Oklahoma to Louisiana and Arkansas on Saturday, to Mississippi, the Florida Panhandle, Alabama, Tennessee, Kentucky and western Georgia Saturday night.

Prior to expanding into the Northeast, the drenching rain will pivot through the rest of Georgia and the Carolinas on Sunday. Most areas from Mississippi and western Tennessee on west to Oklahoma and Texas are likely to be dry with a return of some sunshine on Sunday. Clearing from west to east is also likely in the Southeast states, but this may take until Sunday evening to reach the I-95 corridor. 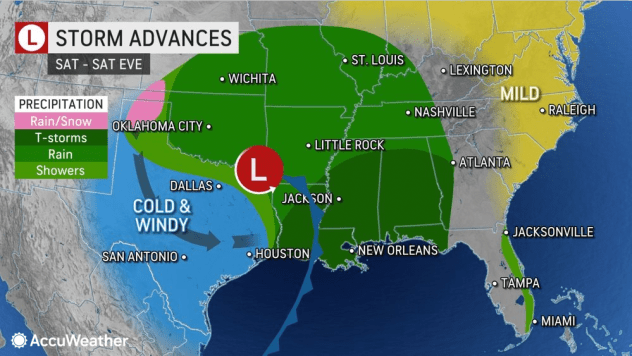 Following unsettled conditions with showers and thunderstorms this past week, much of the Florida Peninsula may avoid the bulk of the rain from the storm system from Friday through Sunday, which is good news for post-hurricane cleanup operations as well as those vacationing over the Thanksgiving holiday. But, since the storm will be hitting northern areas to close out the weekend, rain and poor visibility may lead to flight delays at destination points, especially in the Northeast.

Aside from the risk of travel disruptions from the double-barreled storm, its rain and snow will result in another chip out of the long-term drought in much of the region. 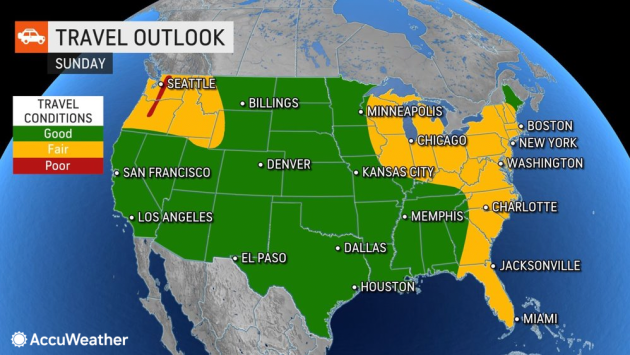 Enough rain may fall to bring another slight to moderate surge in water levels on the lower portion of the Mississippi River. Very low water levels since the midsummer have been hindering barge operations on the waterway.

Since cold Canadian air will not follow the storm, where sunshine returns, temperatures will rebound to near- to above-average levels for late November from Sunday to Tuesday. This warmup may help to fuel thunderstorms and the potential for severe weather as the next storm system crosses the Central states on Tuesday and Wednesday. 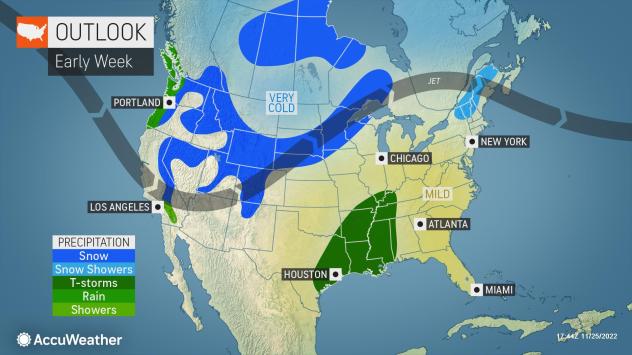 AccuWeather meteorologists have already begun to raise awareness of the severe weather risk more than a week in advance and will provide updates on the potential in the coming days.