Across the continent this past week, people recorded their dogs enjoying snow to an extreme.

Bristol Bay Borough – which was the state's very first county back in 1962 – is home to Katmai National Park, serves as the easternmost arm of the Bering Sea and was also host to the coldest temperatures in the country last month, as the town of King Salmon endured its coldest November on record, averaging only 4 degrees F, while Cold Bay averaged 27.7 degrees.

According to the National Weather Service, the areas weren't alone, as multiple other locations throughout the state endured one of their five coldest Novembers in history.

November was a cold month across much of Alaska – especially in southwest Alaska. These location all saw a Top 5 coldest November. Both King Salmon and Cold Bay recorded their coldest November on record! 🥶 pic.twitter.com/pv3LZMnDgF

According to AccuWeather Senior Meteorologist John Gresiak, the dome of high pressure that has built over the western U.S., which has influenced the record-breaking high temperatures, has shifted storm patterns to the north. That ripple effect has kept cold air trapped in the northwestern portion of North America.

"To the north of the series of atmospheric river storms that have hit parts of western Canada and the northwest U.S., a very cold and dry air mass has settled over Alaska for the past few weeks," Gresiak said. "Even southern coastal areas which are often moderate have been quite cold."

Along that southern coast of Alaska, some of the weather factors that help moderate those cold conditions have been nullified.

Alaska-based climatologist Brian Brettshneider told AccuWeather that a number of influences are responsible for keeping that cold air trapped in Alaska for the entire month of November.

While it's no shock for Alaskans to see temperatures drop during meteorological winter as the state sees decreasing sunlight, Brettshneider said the trapped mass of cold air has prevented warmer air from trickling into the state to moderate temperatures amid the loss of solar energy. 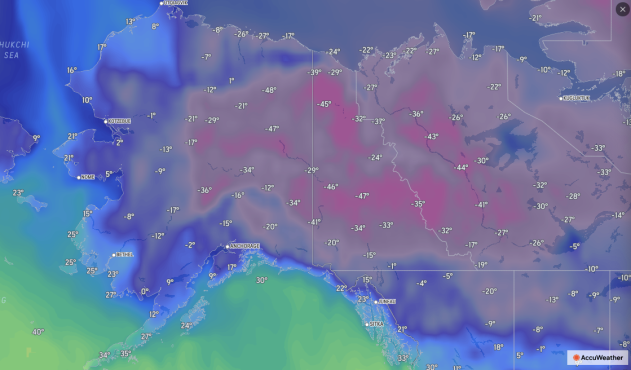 "An upper-level trough of low pressure was established over the western part of the state and it really hasn’t budged much in weeks," he said. "So you keep losing more and more solar energy, radiate it out to space, and again the upper-level low has prevented any moderating air from coming back in, so it just gets colder and colder."

On top of that, he said the icepack in the Bering Sea has been more established this season than in years past, which has also limited any of the moderating influences that warmer ocean waters could have.

And while the remarkably low temperatures are certainly noteworthy, Brettshneider said it's been the persistence of the cold that's truly been unusual.

"These types of features tend to come and go during the cold season, but this is has been very persistent, it’s been like anchored in place for weeks and that’s really been perhaps the most unusual part of it," he said.

For now, the unusually cold temperatures seem to be here to stay.