A major snowstorm in northern Denmark shut down the local roads, leaving shoppers stuck inside an IKEA to throw a giant slumber party. 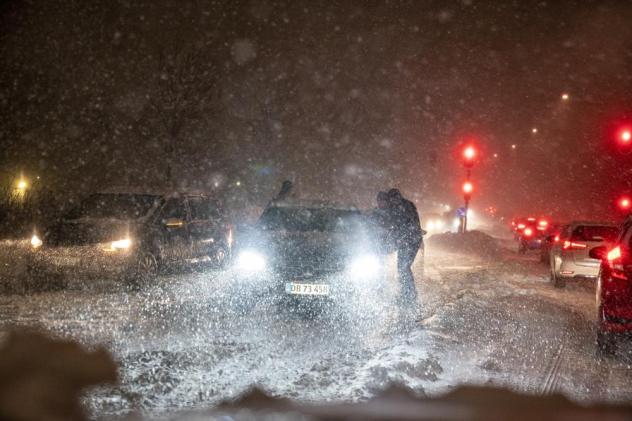 With a snowstorm closing the roads and grinding public transportation to a halt in Aalborg, Denmark, six customers and 25 staffers at an IKEA were forced to spend the night in the massive furniture store, according to reporting from The Associated Press.

The snowstorm dropped up to 12 inches of snow Wednesday around Aalborg, which is in northern Denmark about 260 miles northwest of Copenhagen, leaving patrons and workers alike stuck until the roads could be cleared the following day.

The six customers and 25 staffers lived fairly comfortably while stranded inside the IKEA, taking advantage of the amenities that can be found in the department store chain. They eased their hunger by eating famous IKEA food, like cinnamon rolls, and passed the time by watching Christmas shows and sporting events on the televisions throughout the warehouse. With conditions not improving by nightfall, the group ended up sleeping in the beds in the warehouse's showroom.

“We slept in the furniture exhibitions and our showroom on the first floor, where we have beds, mattresses and sofa beds,” store manager Peter Elmose said. People could “pick the exact bed they always have wanted to try.”

Erik Bangsgaard, 75, discussed the unusual slumber party with a local TV station. He and his wife, marooned in the IKEA because of the storm, spent the night sleeping in one of the IKEA beds. Bangsgaard told the local station that he and his wife had been joined by friends and that the plan was to breeze into IKEA, sample some of the food on the store's Christmas menu then be on their way. But as the storm outside intensified, it became clear that leaving wasn't much of an option.

"Then the boss came and asked us if we would not stay and spend the night. So we did," Bangsgaard said. "I have probably never tried that before, but we have slept well in the hours when we could sleep."

The snowstorm was the culmination of an unseasonably cold stretch of weather in Aalborg and the surrounding region. The normal high temperature at this time of year is about 41 degrees Fahrenheit with lows hitting about 33. But over the last six days, daily high temperatures have made it out of the 30s just once, and low temperatures have consistently been dropping into the low 20s. On Wednesday, the mercury barely made it above the freezing mark, hitting a high of just 34 and the low bottomed out at 26 degrees, conditions that were just right for big snow when the precipitation moved in.

Some of the people trapped in the IKEA were workers at a toy shop next door, including Michelle Barrett, one of the toy shop staff.

“It’s much better than sleeping in one’s car. It has been nice and warm, and we are just happy that they would let us in,” Barrett said. “We just laughed at the situation, because we will probably not experience it again."

This is the second time in a matter of days that people were trapped by a snowstorm. Last weekend, pubgoers at the Tan Hill Inn, England's highest-elevation bar and restaurant, who were on hand to watch the Oasis cover band Noasis, ended up being stranded for three days when Storm Arwen blew through and dropped so much snow, it took days for the roads to be cleared. Those people also reported a generally pleasant experience and even took to jokingly renaming the cover band "Snowasis."

In fact, the confluence of these two weather events caused the AccuWeather social media team to poll followers on which was the better place was to be stranded during a major snowstorm. Vote in the poll below.

Which location would you rather be snowed in at? ❄️

Weather conditions in Aalborg are set to improve a bit, with AccuWeather forecasting some additional light snowfall in the days ahead. But it will remain unseasonably cold there for at least a few more days.