A 9-year-old girl and a 5-year-old girl were reportedly rescued by some quick-acting students who happened to be passing by when a scary situation began to unfold.

After the ice caved beneath two girls skating on a frozen lake, three university students jumped in to help save a 9-year-old from the freezing water.

In a daring rescue caught on camera, three university students took quick action to save a 9-year-old girl who had become trapped in a frozen lake in northern China.

The rescue occurred on Nov. 27 in the city of Zhangye in Gansu Province, more than 800 miles west of Beijing.

The university students rescued two girls from the icy lake. First, they managed to carry a 5-year-old girl safely to the shoreline and off the shattered ice of the lake.

Then, the students went to rescue a 9-year-old girl who had fallen into the frigid water after the ice collapsed. Two of the students plunged themselves into the chest-deep lake, trying to get the girl out of the dangerously cold waters, cellphone video showed. A third student found a large stick with a rope attached and tossed it to the girl, successfully using it to help pull her and her rescuers back onto land. 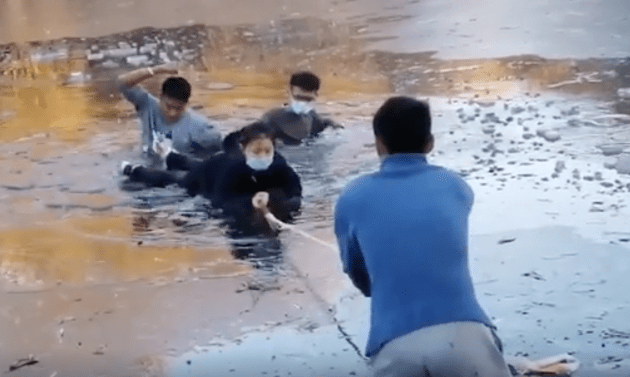 Students are seen in cellphone video rescuing two young girls from an icy lake in China on Nov. 27, 2021.

Although temperatures had dipped into the teens during the overnight hours in Zhangye, there was some moderation during the day and the mercury topped out at a high of 52 degrees Fahrenheit on Saturday.

While the two girls made it out safely thanks to the heroism of people who were passing by, some people who venture out onto icy lakes are not as lucky. Before venturing out onto ice during winter, there are important steps to take to make the journey as safe as possible.

Ice strength can be difficult to determine, as it depends on a multitude of factors, including thickness, external temperature over a period of time and on the day, snow coverage, depth of water under the ice, the size of a body of water, chemical composition of water (fresh or saltwater) and local climate fluctuations, according to the Boy Scouts of America.

When assessing whether to go out on the ice, only do so if there has been a hard freeze that forms clear solid ice, experts advise. Transparent blue and black lake ice is typically the safest. Extreme caution should be used with white opaque ice. Stay off gray ice, as well as white and gray mottled ice, which is the weakest form of ice. 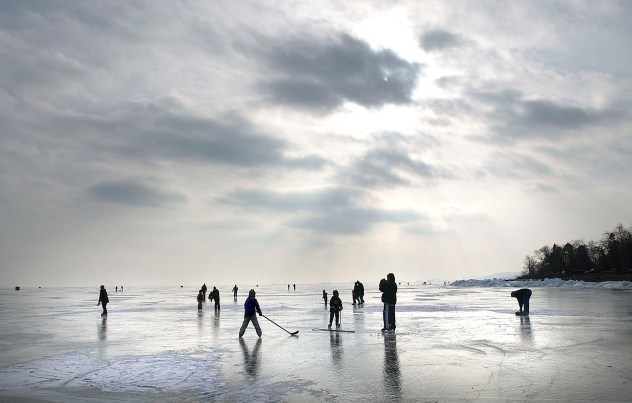 She advises choosing a rock about the size of two fists and throwing it up in the air, watching it land on the ice. If the rock hits the surface, bounces away and leaves only a small mark, the ice is thick enough for skating safely.

“If it plops and it sticks, then that’s around 2 inches, and that’s where you have to be careful,” Kottlowski warned.

When testing the ice, one should also be sure to listen to it. The thinner the ice, the louder it will sound as it cracks.

If possible, it is always a good idea to formally measure the thickness of the ice before going on it. Four inches will typically support a person on foot, but it will take approximately 6 inches of ice to support someone on a snowmobile or ATV, according to Michigan State University (MSU).