A Danish researcher's striking image isn't exactly what it seems at first glance — and scientists say scenes like this could become all too common in the future. 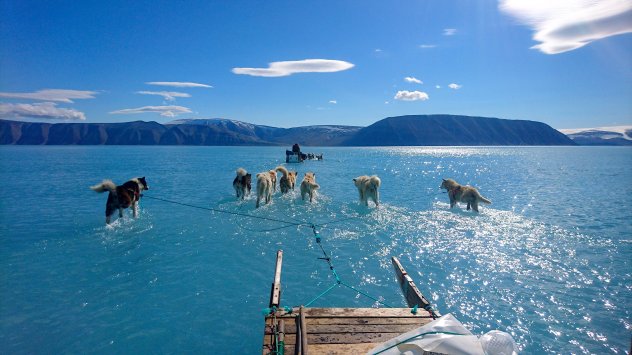 It may appear at first glance that this striking image shows sled dogs trotting on top of the water's surface across northwest Greenland. The dogs and Danish Meteorological Institute climate researcher Steffen M. Olsen, who captured this photo in June 2019, are actually traveling across sea ice flooded by surface meltwater — a melting that has not only created problems for researchers like Olsen, but also communities in Greenland that depend on the sea ice in its solid state.

The dogs and research team had to travel across the water, while scattered ice patches peeked through, to complete the long task of retrieving their oceanic moorings and weather station instruments on sea ice in this region of Greenland, Olsen’s colleague, Rasmus Tonboe, said on Twitter. Dog sledding was the chosen method of transport during the 2019 mission, as it's considered the most practical way to navigate the region this time of year, according to the researchers.

“Rapid melt and sea ice with low permeability and few cracks leaves the melted water on top,” said Tonboe. Olsen said on Twitter that the ice in the area at the time was around 3.9 feet (1.2 meters) thick, with about 2,854 feet (870 meters) of water below that.

The sea ice provides an essential means of transport for Greenland communities that also rely on the ice for hunting and fishing, according to Olsen. “Together with the local hunters, we have been measuring ice thickness from December to now — an ongoing activity for more than a decade,” he said via Twitter.

Olsen added that extreme events such as flooding of the ice by the abrupt onset of surface meltwater call for an “increased predictive capacity in the Arctic,” referencing the photo he captured in the middle of the Inglefield Bredning fjord, which went viral on social media. He also shared a short video clip.

Danish Meteorological Institute climate researcher Ruth Mottram, who specializes mostly in the elements of Greenland and the ice sheet, said that the Olsen project works in close collaboration with the hunters in the village of Qaanaaq, a settlement located in the extreme north of Greenland, as many people still live a traditional subsistence lifestyle in this region. “They are monitoring sea ice and ocean conditions in Inglefield Bredning, close to Qaanaaq,” Mottram said in a statement given to AccuWeather.

The project involves placing instruments on sea ice that forms in the bay during winter each year. Researchers then collect those instruments in the early summer before the sea ice breaks up, to avoid losing expensive equipment to the ocean, Mottram explained.

During 2019's trek to retrieve the instruments, researchers encountered a lot of standing water atop the sea ice. “The ice here forms pretty reliably every winter, and is very thick, which means that there are relatively few fractures for meltwater to drain through,” said Mottram, noting that the week Olsen’s startling photographs were taken saw the onset of “very warm conditions in Greenland” and in much of the rest of the Arctic in June. “[This was] driven by warmer air moving up from the south,” Mottram said.

The dense and fracture-free ice not allowing the melting water to seep through any cracks posed a challenge for the dog sleds racing across it.

The Danish Meteorological Institute’s weather station nearby at Qaanaaq Airport registered a high of 63 degrees Fahrenheit (17.3 degrees Celsius) on June 12 and 59 F (15 C) on June 13, according to Mottram, “which is pretty warm for Northern Greenland, even in summer.”

Nearby Thule Air Base averages high temperatures of less than 40 degrees F (4.4 C) in early June, but spiked above 60 F (15.6 C) 5 times that summer, according to AccuWeather Meteorologist Jesse Ferrell. “This was quite unusual. The station didn't reach 60 degrees again in 2020 or 2021," Ferrell added.

Danish Meteorological Institute’s climate model simulations have shown that in the future, there could be a general decline in how long the sea ice season lasts around Greenland. “How fast and how much is very much dependent on how much global temperature rises, but the 2019 warming is still a weather-driven extreme event, so it’s hard to pin it down to climate change alone,” Mottram said in an email. 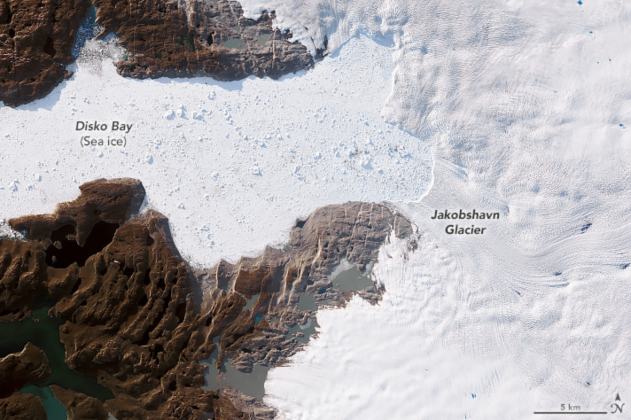 Jakobshavn Glacier, shown in this photo taken in June 2019, has grown for the third year in a row, and NASA Earth Observatory scientists attribute the change to cool ocean waters. (Photo/NASA)

These kind of warm-melt events are usually expected over Greenland later in the summer during late June or early July, making the scene captured on Olsen’s camera in early June unusual. However, Mottram said it’s not unprecedented. “A similar event happened in June 2012, for instance, that was, if anything, more extreme than this one,” she said.

Even in the midst of the apparent heat wave in Greenland in 2019, NASA scientists said that the Jakobshavn Glacier in western Greenland continued to grow for the third-straight year, and scientists attribute the change to the world’s fastest-moving glacier to cool ocean waters. A 2021 study looking at 150 years of melt data found that, despite the recent turnaround, the Jakobshavn Glacier could be approaching a tipping point in terms of ice melt.

The highly active glacier discharges a large amount of ice from the Greenland Ice Sheet into Ilulissat Icefjord and adjacent Disko Bay, according to researchers, which poses implications for sea-level rise.