Authorities believe mud buried six trailers, and up to 15 vehicles on the highway, as it tumbled on a 656-foot stretch of the road.

A landslide in the southern Brazilian state of Paraná killed at least two people and left dozens missing on Wednesday, Nov. 30, according to officials.

(CNN) -- A landslide in the southern Brazilian state of Paraná killed at least two people and left dozens missing on Wednesday, according to officials.

A landslide, which followed heavy rainfall, affected Brazil's BR-376 highway, CNNE reports. Authorities believe mud buried six trailers, and up to 15 vehicles on the highway, as it tumbled on a 200-meter (656-foot) stretch of the road in Guaratuba, about 300 miles south of Sao Paulo in southeast Brazil.

A fire department representative told local media that they estimate that between 30 and 50 people could be missing.

The representative added that military police, firefighters, civil defense teams and rescue dogs are assisting with rescue efforts and the cleaning of embankments.

The heavy rains also caused flooding and flash floods in other coastal municipalities.

There are 680 people and more than 500 houses affected, some of them destroyed, according to the official balance.

According to Reuters, landslides blocked access to Paranagua, a major port for grains and sugar shipments. 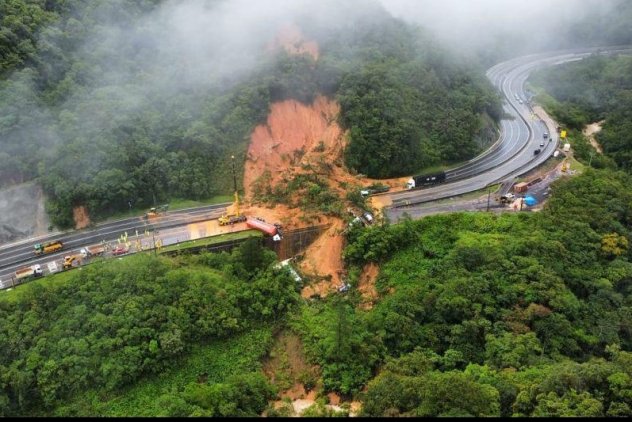 A deadly landslide engulfs Brazil's BR-376 highway in the southern state of Parana, burying six trailers and as many as 15 vehicles. Officials report two people are confirmed dead and between 30 and 50 people are missing. (Photo courtesy of Santa Catarina Fire Department/UPI)