The week began with temperate conditions in much of the Northeast, but that won't be the case for much longer.

The second half of 2020 has started as hot as possible for many areas around the United States, putting some regions in striking distance of rewriting a few pages in the record books.

While some locales have seen one-off scorchers, few places have seen the steadily oppressive temperatures that Washington, D.C., has sustained over the past three weeks. In fact, D.C. residents haven't seen a day under 90 degrees Fahrenheit yet this month.

Tuesday's high of 90 F recorded at Reagan National Airport pushed the city's streak to 19 straight days of 90-plus degree weather. If conditions remain this hot in the nation's capital through Friday, the streak will break the previous record of 21 consecutive days, set in 1980 and tied in 1988.

A persistent pattern with high pressure sitting off the Atlantic coast for the last couple of weeks has "funneled in very warm and humid air to the region," Cody Ledbetter, a forecaster with the National Weather Service (NWS) office in D.C., told AccuWeather. 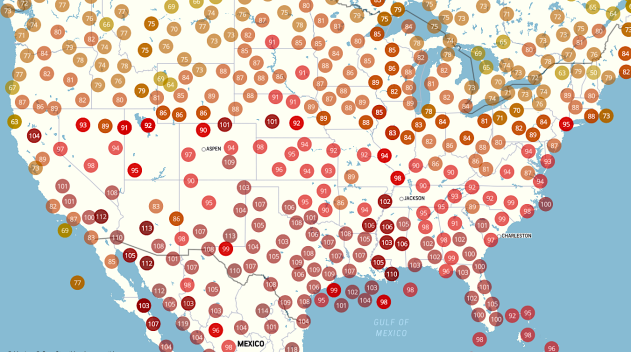 AccuWeather RealFeel® Temperatures climbed to 90 degrees or greater across more than two-thirds of the United States on Monday, July 13, 2020. (AccuWeather)

"It’s really a pretty typical summer pattern, it’s just that when you get this many 90-degree days in a row, it catches some eyes," Ledbetter said. "The average high temperatures for July in the D.C. area is in the upper 80s for this time of year, so it’s not necessarily abnormal to see 90-degree days, but this many in a row is getting close to record territory."

The hot streak has also skewed early this year. The 19-straight days of 90-degree highs, which began back on June 26, is the longest for the year to date in recorded history, meaning D.C. has never seen a sustained stretch of weather this hot this early in the year.

Along with the heat rushing in off the coast, Ledbetter added that the urban heat island effect has helped to keep the streak alive on some days.

Urban heat islands can occur in densely populated areas, such as D.C., around the country that have routinely higher temperatures than surrounding areas. Factors such as a quickly rising population lead to enhanced infrastructure like skyscrapers and more paved roads, increasing the amount of sunlight absorbed in big cities.

Proof of the urban heat island effect can be seen in the temperatures recorded in nearby Annandale. Despite being located just 10 miles apart, Annandale has seen two days under 90 degrees this month and consistently cooler conditions than its capital neighbor.

Nearly half of continental US in throes of brutal heat wave
Increasing frequency of heat waves worldwide since the 1950s
Heat exhaustion vs. heatstroke: What are the warning signs and how should you react?

To reach that record-breaking streak day on Friday, D.C.'s temperature would have to climb despite two overcast days to start the week.

Elsewhere in the country, records have already fallen throughout the Southwest after a recent hot stretch not only rewrote a few pages of the record book, but it may have singed its edges.

On Monday, at least 13 high temperature records were match or broken in cities across Texas, New Mexico and Arizona.

Among those records, one occurred in San Antonio, which logged it's hottest July day on record when the thermometer reached 107 F. Del Rio, a city about 160 miles west of San Antonio, tied its record for hottest all-time temperature at 112 F.

Despite the immense San Antonio heat, registering at 13 degrees above normal, the city saw a low turnout at its designated cooling centers. 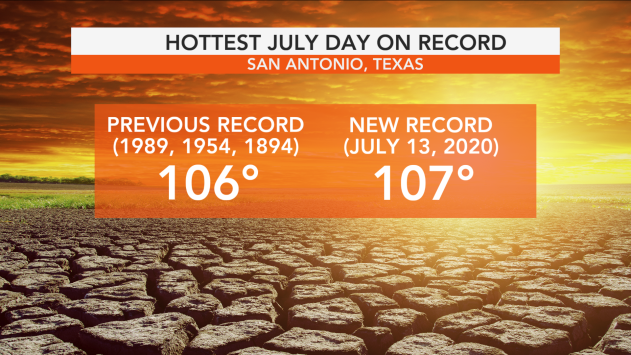 “There have been just a handful of community members at West End since last week,” said Roland Martinez, of the city’s Department of Human Services and senior centers, according to Express News. “It’s not possible to know why, but it could be because of the pandemic.”

According to AccuWeather Senior Meteorologist Dave Bowers, more than 30 high-temperature records were broken on Sunday in the region.

A high of 128 F in Death Valley, California, made for the hottest reading in the country, but came up two degrees short of a daily record for the historically hot desert valley.

Death Valley, CA reached 128 degrees F yesterday, after a LOW of 100 F that was repeated this morning. Today's forecast is a "cooler" 123. https://t.co/K31zVu7OlD pic.twitter.com/AnTNubWQ7N

"Three dozen record high temperatures set yesterday from Arizona to west Texas north into Colorado," Bowers said. "Much of the southwestern U.S. has temperatures run 10-12 degrees above normal this weekend and will be today."

In Phoenix, a daily record high of 116 F was recorded on Sunday, breaking the previous record set in 2005. According to Fox 10 Phoenix, fire officials are asking people to stay indoors to avoid heatstroke. Another daily record high was tied on Monday as well there when the temperature topped out at 114, a mark reached on four other occasions, according to the NWS, in 1939, 1989, 2003, and 2005. While a high of 111 was recorded on Tuesday, this fell well short of the daily record of 116, set in 2003.

Through the end of the week, Bowers said some reprieve may be in store for the sweating residents in the region as the sweltering conditions work their way eastward into the Mississippi Valley.

Miami heat! City sees hottest week on record after Saharan dust saps moisture from air
Hot in the Windy City. June ends on blistering note for Chicago residents
Nearly half of continental US in throes of brutal heat wave