Heat advisories are issued for a large portion of Florida as RealFeel Temperatures shoot well over 100 degrees, making it dangerous to be outside for extended periods of time.

Floridians, particularly in the southernmost areas of the state, are generally accustomed to warm weeks. What might feel uncomfortable to most Americans may just be a usual June day for a Miami resident. But, the sweltering conditions of the past week have gotten even the most heat-resistant residents sweating.

“People aren’t the most happy of campers," said Paxton Fell, a meteorologist with the National Weather Service (NWS) office in Miami. "Florida itself is typically used to a pretty warm tropical climate, but I mean people have been complaining the past few days because it’s just been so hot."

The city had its warmest week on record for any month, with the mean temperature over a seven-day span averaging 88.1 degrees Fahrenheit ending on Sunday, according to the NWS. The 88.1-degree average is a mean temperature figure, which factors in the daily high and low temperatures for a given location.

The previous seven-day record was 87.8 F, set last year in the final week of June, according to Eric Blake, a hurricane scientist with the NWS. Records date back to 1895. 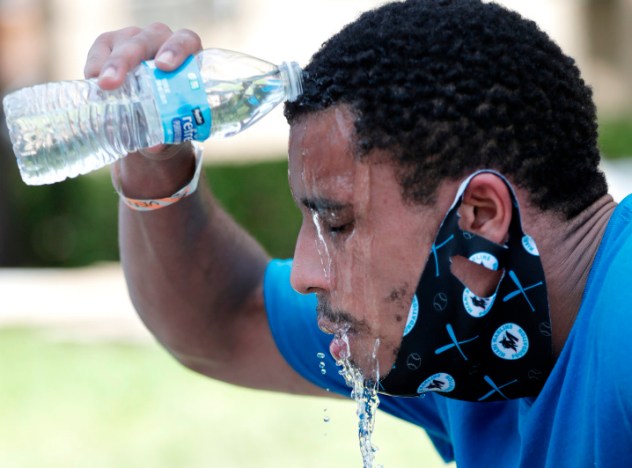 Miami Marlins' baseball team Membership Experience Executive Lenny Valdez pours water on his face as he takes a break from volunteering at a food and mask distribution site put on by the Marlins, Monday, June 29, 2020, outside Marlins Park stadium in Miami. (AP Photo/Wilfredo Lee)

On Tuesday morning, the city saw the heat index reading fall below 90 degrees for the first time in seven full days. That's including nights and mornings. "I mean, it might be 9 or 10 in the morning and the heat indices are already in the 90s, so it’s been a little oppressive heat-wise down here," Fell said.

But the heat quickly rebounded and the high temperature on Tuesday topped out at a scorching 98 degrees, breaking the daily record of 95 for June 30, which had stood since 2015.

In fact, the 98-degree reading on the thermometer Tuesday was just the 14th time in 125 years that Miami has recorded a temperature that high. Including Tuesday's high, the city has hit 98 degrees just 13 times since 1895. Miami eclipsed the 98-degree mark once, in 1942 when the mercury hit 100, and a 99-degree high temperature has never been recorded there.

The stretch of historically hot weather comes at a time when Florida is going through a surge in COVID-19 cases. Miami Mayor Francis Suarez last week issued a mandatory mask order, according to the local TV station NBC 6, requiring residents to wear face coverings while in public places or face fines of up to $500. A similar rule went into effect in South Beach, but fines there are only $50.

Of course, there are ways to wear a mask to stay cool, but now that cooling off at Miami area beaches will be off limits over the Fourth of July weekend, staying cool and wearing a mask will be extra challenging. 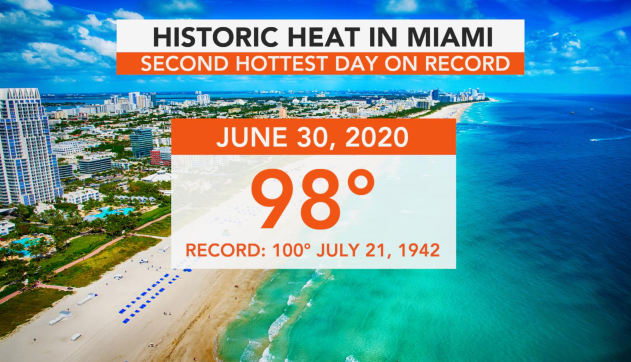 The heat in Miami to close out the month of June has been historic.

Numerous factors have combined to form the recipe for this heat wave. Even though an occasional summertime high-pressure system overhead isn't abnormal, the dominant ridge of high pressure that has sat over the state without budging is unusual. Coupled with notably high moisture values making for higher dew points, the heat index, which factors both temperature and humidity, has topped out in the triple digits for the past week.

Blake, who noticed the record and was the first to post on Twitter about it, put the record into some context that many living in the city will be able to identify with. "This past week has been ridiculously warm in Miami," he said on Twitter, describing the record as "spectacular."

This past week has been ridiculously warm in #Miami- tentatively tied both the record high and a monthly record low maximum again. Having an average temp over 2F warmer than any other similar week is pretty spectacular for June.... pic.twitter.com/lFD00vRlv9

There's also another peculiar factor that wafted its way into the heat recipe that has sent air conditioners into overdrive.

"The other factor is the little bit of Saharan dust over us, a little dust air layer," Fell explained. "It's not as much as other areas like Texas or anything like that, we just had a thin smattering of it, but that also helped to heat things up a little bit."

Heat things up it sure did.

The cloud of Saharan dust arrived from the west coast of Africa last week with peculiar impacts. In the Atlantic Ocean, the dust put a pause on tropical development. In areas across the Caribbean, it left behind a thin coating on the ground. While some states got beautiful sunsets from the phenomenon, the dust plunged air quality levels from healthy to hazardous in Texas, according to AccuWeather National Reporter Bill Wadell. 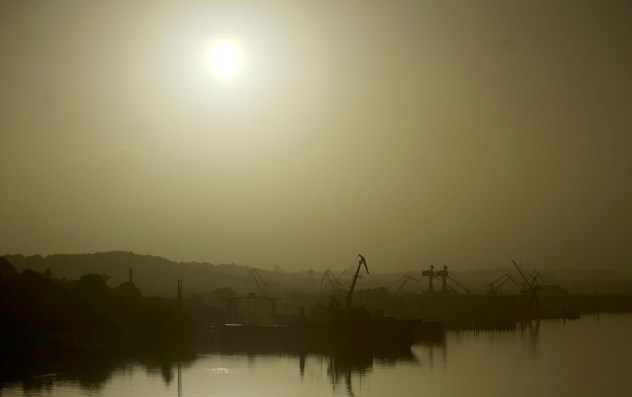 A view of Havana's harbour as dust carried by winds from the Sahara desert shrouds the city, Cuba June 25, 2020. REUTERS/Alexandre Meneghini

In Florida, the dust was responsible for sapping moisture out of the environment and stealing the rain away from Miamians who depend on the daily showers to lower temperatures.

Dust can act as what meteorologists refer to as a "cloud condensation nuclei," which essentially means that dust particles can collect moisture in the atmosphere and help to form clouds. The dust is "taking moisture out of the atmosphere because it's creating more clouds, and because of that, the rain becomes more shallow," Fell explained, adding that rain and moisture from storms haven't been reaching the ground since the dust has been absorbing so much moisture. "So, when we do have thunderstorms and rain, usually it's not very heavy precipitation whatsoever," he said.

The formula for record-breaking heat isn't expected to be broken until rain arrives this weekend, Fell said. Until then, the chance remains for more records to be set or broken.

"The main messages from us is telling people if they have to go outside or engage in any activity, to make sure they’re taking plenty of breaks in air conditioned rooms and drinking plenty of water," Fell said. Of course, never leave children or pets in the car for any amount of time because temperatures get dangerous to deadly within minutes."