Rounds of much-needed rain in central, southern US will linger into the weekend

Experts believe a fossilized jaw bone that was found in the drought-stricken Mississippi River belongs to an extinct lion species.

A rainy week in a large swath of the south-central United States will turn into a rainy weekend, as another round of drought-relieving rain is forecast to spread from the southern Plains to the Tennessee Valley from Friday night through Saturday night.

The beneficial rain will not come without its pitfalls, as it will aggravate any lingering flooding issues and potentially cause travel issues into the weekend, according to AccuWeather meteorologists. The rain will also precede a threat of severe weather and tornadoes early next week as a more dynamic weather pattern unfolds.

For the most part, however, the rain is good news, as much of the region is currently in the midst of some level of drought, according to the latest version of the U.S. Drought Monitor. This ongoing, minor relief from the prolonged dry conditions and low water levels on rivers was first mentioned by AccuWeather forecasters back in October and may very well persist into the early part of 2023. 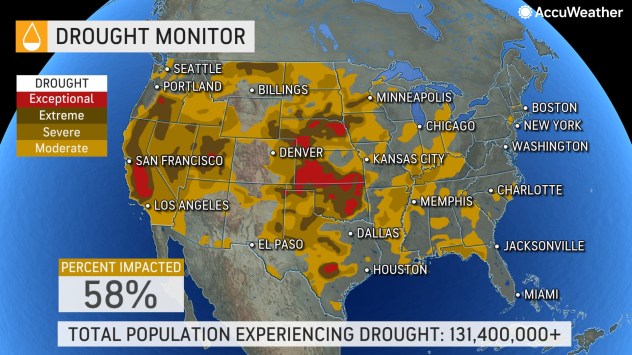 "The storms arriving this weekend and next week are the types of storms and pattern that will push water levels to more comfortable readings going forward, and we can expect a similar, beneficial storm track to last through the rest of December and through January," said AccuWeather Lead Long-Range Meteorologist Paul Pastelok.

For some, the rain has been too much of a good thing, and in some cases, it fell too quickly. Dating back to Monday, a large swath of the mid-Mississippi and Tennessee valleys, as well as areas just to the southeast, have measured between 1 and 4 inches of rain. The highest amounts have been from central Tennessee into northern Alabama and Georgia, where totals in excess of 5 inches were reported. 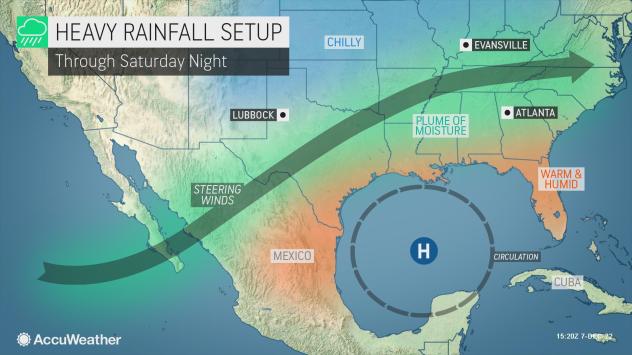 Additional rounds of rain are expected to continue filling rain gauges in the region through the remainder of the week. The next round soaked a corridor from central Oklahoma to southern Missouri and into the lower Ohio Valley on Thursday night, in an area farther north than where heavy rains have recently fallen.

On Friday, the rain had shifted to some areas that were previously soaked earlier this week -- in northern portions of Mississippi, Alabama and Georgia.

By the beginning of the weekend, yet another round of rain will take shape in the southern Plains, due to an influx of moisture from the Gulf of Mexico and a new storm emerging from the Rockies. The storm system will evolve from an area of late-night rain in the Red River Valley on Friday night to a corridor of heavy showers and thunderstorms stretching across parts of the Mississippi and Tennessee valleys on Saturday and Saturday night.

AccuWeather forecasters say another inch or two of rain can fall on top of what has already been measured in this area to start the weekend, leading to travel delays and localized flooding but also providing some relief to those long-lasting drought issues.

Motorists along portions of interstates 10, 30, 45 and 55, among others, will endure these rounds of heavy rain into the weekend, which can reduce visibility due to road spray and increase the risk of hydroplaning.

The potential for more rain is also good news for those with commercial interests along the Mississippi River, which has recorded near-record low water levels dating back to earlier this year. 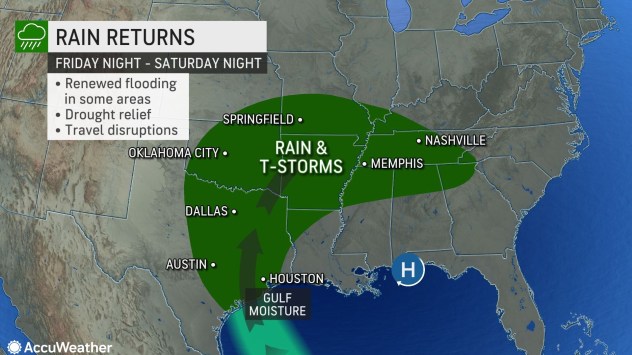 "We have recently seen some positive reaction to the Mississippi River water levels from recent rounds of rain, and we will continue to see the same in the days and weeks moving forward," said AccuWeather Senior Meteorologist Alex Sosnowski.

"Some locations along the river are still struggling with ultra-low water levels, but at least the overall trend has been up rather than down since the end of the summer," added Sosnowski.

A significant amount of rain is needed to get barge traffic moving at a reasonable pace, and it needs to fall over the entire Mississippi basin, not just the southern half as it is now. "Rainfall has brought water levels to where ships can transport, but schedules remain modified and ships are carrying less cargo for weight purposes," points out Pastelok. 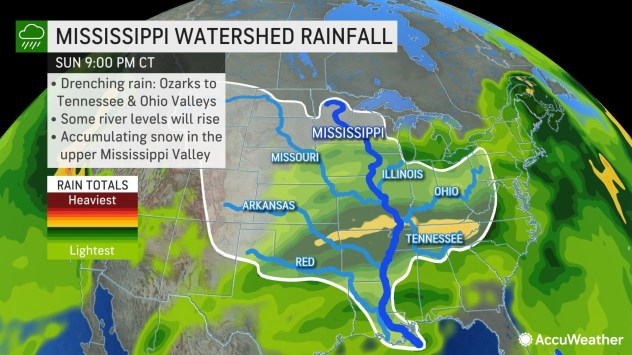 While the rain is good news for agricultural and commercial interests, those pining for dry weather as the holidays approach may get their wish by the middle and end of next week. AccuWeather forecasters say a cooler, drier air mass should take shape across the central and southern U.S. in the wake of another storm. However, that major storm from Monday to Wednesday of next week is likely to bring widespread severe weather, including tornadoes and perhaps localized flooding.