Tornadoes, blizzard conditions, floods all possible from upcoming massive storm in central US

Multiple days of extreme weather are expected this week as a sizable and potent storm system navigates its way across the country.

A giant storm will wreak havoc across the central U.S. next week as it delivers snow, severe weather and flooding from Texas to North Dakota.

An enormous cross-country storm is likely to be at its worst over the central United States early this week when a potential tornado outbreak may occur at the same time a blizzard rages about 1,000 miles farther to the north, AccuWeather meteorologists warn.

The same storm will also raise the risk of flooding in the Tennessee Valley, causing temperatures to plunge and winds to howl in the Southwest. It could even spread some snow and ice into the Northeast later in the week.

"You name it, this storm will bring it in terms of wild weather throughout this week," AccuWeather Chief On-Air Meteorologist Bernie Rayno said. 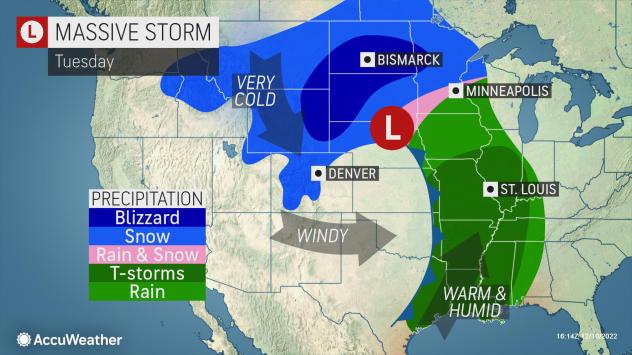 Much of the extreme weather will occur during the three-day period from Monday to Wednesday in the middle of the nation.

The storm will be in a strengthening phase as it pushes onshore and moves inland over the Pacific Coast states this weekend. Many low-elevation areas from western Washington to Southern California will be drenched by heavy rain as feet of snow pile up in the mountains.

Heavy snow to evolve into blizzard as winds howl

The storm system will spread broad areas of heavy snow and gusty winds over the Intermountain West later this weekend and into early portions of the work week before it expands across the northern Plains.

Several inches will pile up in the major metro area of Salt Lake City, as well as Flagstaff, Arizona, from the storm. Blowing and drifting snow on top of the heavy accumulation will lead to difficult travel even outside of the major mountain passes in the region. 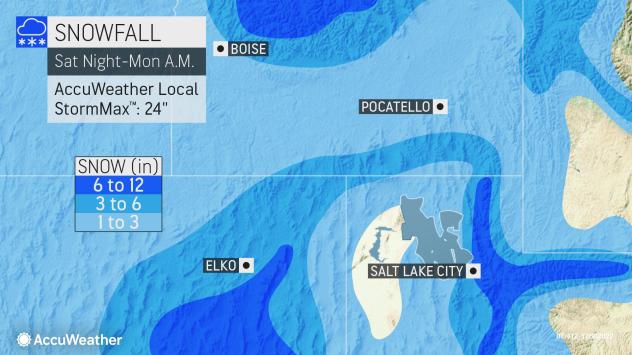 The full fury of the storm's wintry side will be on display from later Monday to Wednesday across the Great Plains. Temperatures will drop, and snow will expand from parts of Colorado to the Dakotas and northern Minnesota.

For example, in Rapid City, South Dakota, temperatures will plummet from the mid-50s on Sunday to the teens on Monday night and remain there through Tuesday and Wednesday as winds gusts of between 30 and 60 mph howl and snow spreads through the area.

While the worst of the snowstorm may occur to the north and west of Denver, blizzard conditions will unfold over tens of thousands of square miles from parts of Colorado, Wyoming and Montana to near the Canada border in North Dakota and Minnesota. 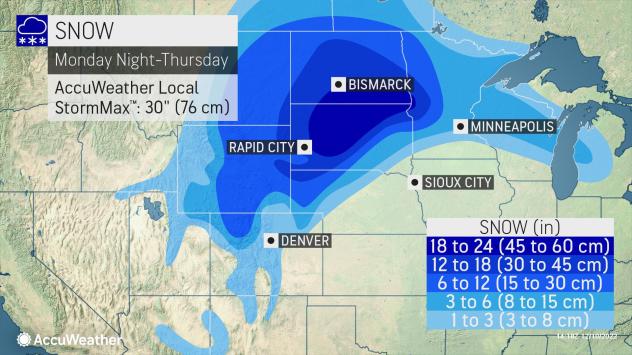 The extensive blowing of the dry, powdery snow is likely to create massive drifts that can block roads and strand motorists along vast portions of interstates 25, 29, 70, 80, 90 and 94, forecasters say.

Tornadoes, flooding likely on the storm's warm side

About 500 to 1,000 miles farther to the south, a significant risk to lives and property will unfold as thunderstorms erupt, become severe and likely unleash multiple tornadoes.

Last year, on Dec. 10-11, 2021, a swarm of tornadoes struck part of the Mississippi Valley, killing dozens of people and injuring numerous others.

As stiff breezes rapidly transport Gulf of Mexico moisture northward this week, stronger and shifting winds higher up in the atmosphere will cause thunderstorms to rotate. Rotating thunderstorms can carry a high risk of spawning tornadoes.

Surging humidity levels, combined with an incredible amount of jet stream energy, will lead to a major severe weather outbreak, according to Rayno. 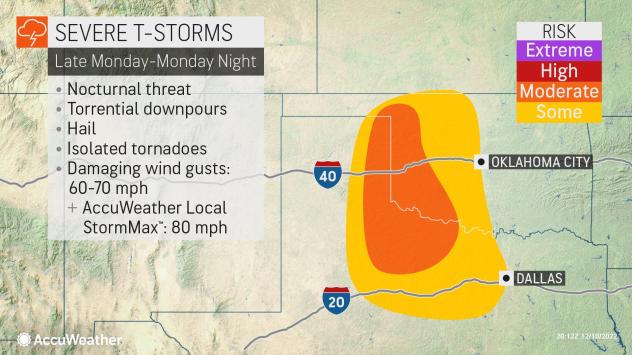 As if the risk of multiple strong tornadoes was not serious enough, a number of the violent storms are likely to occur after dark on both Monday and Tuesday nights. This means that millions of people in the path of the storm should closely monitor severe weather alerts as visual confirmation of tornadoes on the ground may not be possible in every case.

Following a few scattered thunderstorms this weekend from central Texas to Tennessee, severe thunderstorms will ramp up on Monday afternoon from north-central Texas to western and central Oklahoma. All types of severe weather are possible in this zone that will focus on an area just west of the major metro areas of Oklahoma City and Dallas. Potent storms could wander into these locations prior to daybreak on Tuesday, forecasters warn.

During Tuesday and Tuesday night, the severe weather and tornado threat will expand and cover an area farther to the east, reaching areas from northeastern Texas and eastern Oklahoma to the Mississippi River.

Multiple strong tornadoes are possible in this zone, along with large hail, high winds and torrential downpours. Even where tornadoes occur during the daylight hours, they may be difficult to see in advance due to hilly, wooded terrain and poor visibility due to rain in some cases. 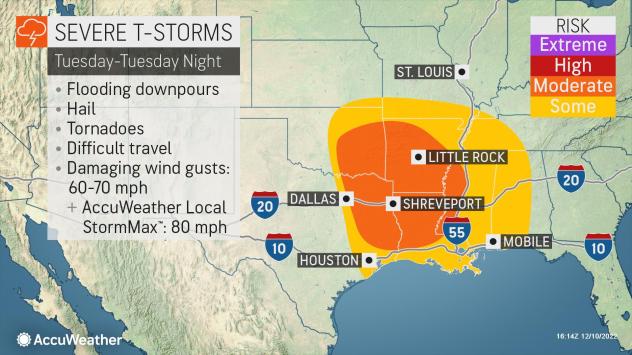 The severe thunderstorm and tornado threat will occur mostly during the nighttime hours on Tuesday and may be focused near and east of the Mississippi River in areas as far along as western Kentucky middle Tennessee, all of Mississippi and western and central Alabama.

It is possible the severe weather threat continues on Wednesday along a portion of the interstate 10 and 20 corridors farther to the east in the South.

Since much of the south-central region has been receiving rain on a more regular basis in recent weeks, not only have drought conditions improved, but the soil has gotten progressively wetter. The saturated ground means that where downpours persist for a longer period of time, the risk of urban and small stream flooding will be significantly higher when compared to recent weeks. The massive storm this week could bring a fresh 1-2 inches of rain in 12-24 hours with locally higher amounts.

Substantial rises are likely on some of the secondary rivers, but river flooding is not expected along the Ohio and lower Mississippi due to very low levels. On a positive note, the additional rain forthcoming from the storm will provide yet another boost in river levels. Minor surges in water levels have allowed some increase in barge operations along the lower portion of the Mississippi in recent days.

The storm may deliver some significant impacts to the East later this week as well.

The initial surge of moisture may occur before the atmosphere has a chance to warm up in portions of the Appalachians, New England and the eastern Great Lakes region late Wednesday night to Thursday. This could lead to a zone of accumulating snow or dangerous ice in some locations. Rain will push toward the southeastern U.S. coast by the end of the week.

However, there is also the possibility of a spin-off storm developing at the end of the week. If all the pieces fall into place, the storm could strengthen quickly, producing wind, heavy rain and even heavy snow for some areas of the Northeast as well.