Snow squall warnings have been described as “critical” by the National Weather Service due to the dangers and loss of life that the hyperlocal weather event can cause, but people have complained about receiving too many of these alerts.

You may have a good idea what to do if you get a tornado warning or a severe thunderstorm warning, but what about a snow squall warning? If you’re on the road, conditions can turn dangerous very quickly.

The National Weather Service (NWS) can send warnings for inclement and dangerous weather, such as flash floods, destructive severe thunderstorms, tornadoes and snow squalls, directly to your cell phone by using the Wireless Emergency Alert (WEA) system, but new criteria from the NWS has changed how many snow squall alerts are being sent to people's phones.

"A snow squall is an intense but brief period of heavy snow, often accompanied by gusty winds," said AccuWeather Senior On-Air Meteorologist Geoff Cornish. "It can be extremely dangerous, especially for highway drivers, because these quick-hitting storms can cause sudden whiteouts and flash freezes."

While snow squall forecasting isn’t new, the warning system is. According to AccuWeather Chief Meteorologist Jonathan Porter, AccuWeather’s relationship with the NWS played a role in the national rollout of snow squall warnings.

“AccuWeather recognized good work being done by both the NWS offices in State College, Pennsylvania, and Binghamton, New York, in delivering snow squall forecasts, but initially, many people simply didn’t see them,” Porter said. “AccuWeather provided suggestions on how the NWS could improve getting these warnings to people, which the NWS has adopted.”

Footage of a snow squall shows just how quickly visibility can be reduced on the roadways. (AccuWeather Senior Meteorologist Alex Sosnowski)

Since 2018, phone alerts have been warning residents when dangerous snow squalls are imminent in order to alert the public of the potential for extremely hazardous travel conditions.

"I liken it to actually driving with a pillowcase over your head," Warning Coordination Meteorologist at NWS Boulder Greg Heavener told KUSA in an interview. "I mean, it can literally be zero visibility where you can't see the hood of your car just a few feet in front of your face. That's how significant these snow squalls can be."

Until this year, all snow squall warnings triggered a WEA notification, alerting residents of the impending squall, no matter the time of day. But, according to public feedback, the NWS issued too many warnings, especially during the overnight hours.

To reduce the number of warnings and make people more aware of the severe nature of the snow squalls, the NWS created new criteria the warning must meet to send out a WEA notification. As of Nov. 7, snow squall warnings will only trigger a phone alert when it's considered to be "significant."

A general snow squall will slicken roads and reduce visibility, but other factors, such as location and time of day, will impact if the warning meets the "significant" criteria.

"Mostly, that has to do with the timing and location of the snow squall," Heavener said. "If a squall is headed towards a major roadway during the hours of 6 a.m. to 10 p.m., there's a good chance our meteorologists will add a 'significant' tag to the warning and a wireless emergency alert will get sent out." 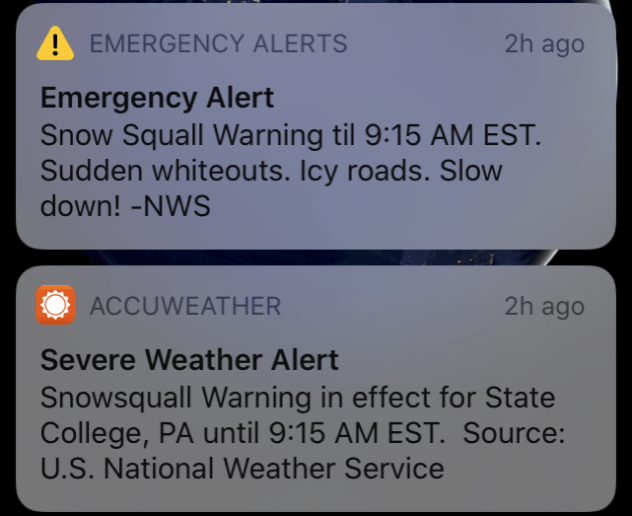 Phones across the eastern portion of the U.S. buzzed with alerts on Wednesday, Jan. 8, 2020, with warnings of an impending snow squall.

A snow squall warning will only be issued when the squall develops during a winter weather advisory or if there are no other winter alerts in place. Snow squall warnings do not get issued when a winter storm warning or a blizzard warning is already in place since the wording of those warnings already details the threats such as zero visibility and flash freezes on the roadways.

When a snow squall warning alert comes through the WEA system, it's crucial to know what to do, experts say. Just like having a safe place to go during a tornado or severe thunderstorm, knowing where to go and what to do if you are caught on the roads during a snow squall is essential.

"Annual highway fatalities from [snow squall] events can exceed fatalities due to tornadoes in many years," the NWS said in the alert's initial service description document. "The Polygon-based Snow Squall Warning will provide critical, life-saving information for these short-term, highly localized, extremely hazardous events to our partners in a manner that will allow them to recognize and parse the products to make them available to their customers.”

In the situation that a driver is caught in a snow squall while driving, AccuWeather Senior Meteorologist Alex Sosnowski says the best defense is to "wait it out" by exiting the highway or taking secondary roads where driving at a slower speed is safer. The problem on interstates, he said, is the pressure drivers feel to drive at a high speed no matter the weather conditions.

“AccuWeather is proud to be the only weather company recognized by the NWS as a 2022 Weather-Ready Nation Ambassador of Excellence. AccuWeather has partnered with NWS for decades to help get critical weather warnings to people in harm’s way quicker and more accurately,” Porter said. “AccuWeather was the first weather source to implement full support for snow squall warnings in the AccuWeather app, website and other services.”

If you'd still like to receive all snow squall warnings on your cell phone, even those that don't trigger a WEA, it is necessary to download a weather app, such as the free AccuWeather app.