What exactly is a snow squall?

Snow squalls are brief, yet intense bursts of snow and wind that are extremely dangerous to drivers.

You’re driving along, the sky is clear and a long stretch of highway lies ahead.

Then, in a matter of seconds, a blustery snow squall descends, encircling your car. Whiteout conditions make driving nearly impossible, drastically reducing visibility to less than a quarter of a mile and quickly erasing the lanes before you.

What do you do?

Snow squalls, those sudden wintry blasts of wind-whipping, heavy snow, are a treacherous part of every winter for motorists.

Deadly pileup of over 48 vehicles on Wisconsin highway

One fatality was reported in a horrific pileup involving more than 48 vehicles on Interstate 41 in Slinger, Wisconsin, on April 21, 2021. Whiteout conditions made travel extremely dangerous.

By definition, snow squalls are intense yet brief periods of moderate to heavy snowfall accompanied by strong, gusty surface winds.

These small but mighty bursts of snow form when the air near the ground is much warmer than the air above, according to AccuWeather Senior Meteorologist Alex Sosnowski.

First, towering clouds develop. Next, moisture is released in the form of snow. Sometimes snow squalls become aligned with the wind.

Sosnowski explained that downdrafts within a squall can pull colder air from high in the atmosphere down near the ground -- turning a sunny afternoon with temperatures in the lower 40s F into a whiteout with a burst of heavy snow and temperatures near 32 F.

Not part of a large-scale storm, snow squalls move in and out fairly quickly and typically last less than an hour.

Although the snow accumulation is not significant because they are so brief -- typically 1 to 2 inches may fall -- snow squalls can create hazardous driving conditions due to the sharply reduced visibility and quick-forming ice. 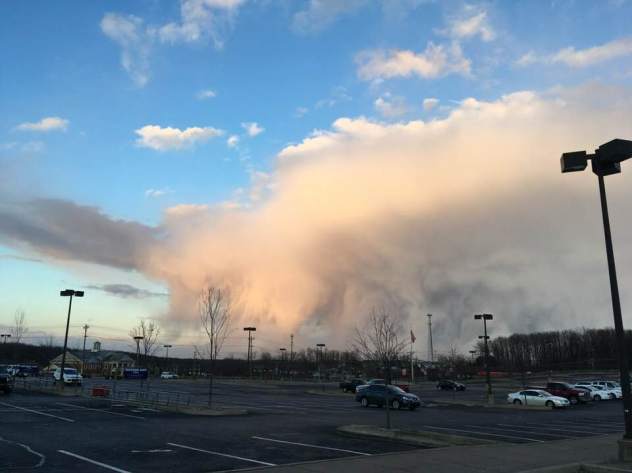 This snow squall was captured around sunset in State College, Pennsylvania, on March 13, 2018. (Photo/Alex Sosnowski)

In some instances, snow squalls may “hit the same area multiple times within a few hours. In this situation, several inches of snow may pile up in part of a community, while a neighboring location less than a mile away may stay completely dry,” Sosnowski said.

And in the strongest snow squalls, thunder and lightning may occur, he noted.

They usually strike during the day and can occur anytime from mid-October through April.

Snow squalls are most prevalent near and downwind from the Great Lakes, but they can occur hundreds of miles away from a source of water, even in the middle of the country. All that is needed is enough moisture in the low levels of the atmosphere to initiate cloud formation and very cold air aloft, according to Sosnowski.

One person was killed and 37 more injured in a major pileup involving trucks and other vehicles on Interstate 80 on Dec. 18, 2019. Snow squalls in the area had led to poor visibility.

What to do when driving in a snow squall

The combination of snow, powerful winds and rapidly plunging temperatures can have deadly consequences -- and they often do.

Highways pose the biggest threat to motorists during a squall.

In April 2021, a dashcam video captured the treacherous nature of snow squalls as tractor-trailers and cars are seen sliding, twisting and crashing along a whiteout-cloaked Interstate 41 in Wisconsin. A 37-year-old woman was killed and dozens injured in a 50-vehicle chain-reaction crash that resulted. 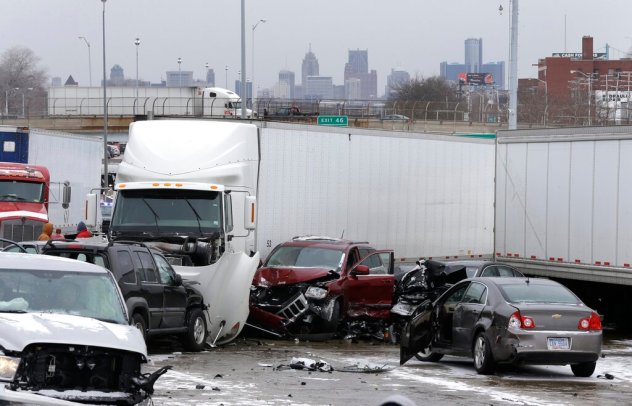 A section of a multi-vehicle crash on Interstate 75 is shown in Detroit on Jan. 31, 2013. Snow squalls and slippery roads led to a series of accidents that left at least three people dead and 20 injured on a mile-long stretch of southbound I-75. More than two dozen vehicles, including tractor-trailers, were involved in the pileups. (AP Photo/Paul Sancya)

According to weather experts, it’s often hard to prepare for such sudden snowfall while you're driving, and some argue there is really no safe place on the highway during a squall.

Squalls often move swiftly along at 25 mph to 50 mph, and road conditions can transition from dry to wet to snow-covered in a matter of seconds.

A squall can approach at such great speed that "traffic is moving west at 70 mph, while the squall is moving east at 30 mph. This gives motorists little time to react,” Sosnowski said. 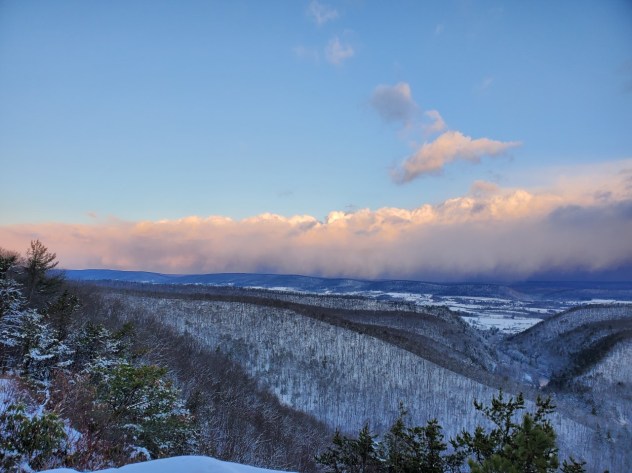 So if you’re already driving on an interstate, what can you do if you get caught in a snow squall?

Here’s what you need to know:

1. Try to exit the highway and pull onto a secondary road.

2. If you cannot exit the highway in time, reduce your speed and make sure your headlights are on. “It is essential that motorists pay attention to the horizon and reduce their speed ahead of the approaching snow squall," according to retired longtime AccuWeather Meteorologist Elliot Abrams.

3. Try to pull way off the highway or into a rest area and wait out the squall.

4. Pulling off to the shoulder of the road during a squall is not advised because oncoming traffic may not realize that your vehicle has stopped even if your emergency flashers are on.

5. Allow plenty of distance between you and the vehicle in front of you.

6. Do not slam on the brakes. You can lose control of your car on slick roadways and cause a deadly chain-reaction crash.

7. Sign up for instant weather alerts that will warn of impending hazardous weather ahead. Due to the fast-hitting nature of squalls, special weather warnings that pop up on smartphones are critically important. (You can download the AccuWeather app here and be sure to turn on the alerts.) That way if you’re already on the highway, you can possibly avoid dangerous driving conditions.

"When AccuWeather forecasts call for flurries, snow showers or snow squalls, motorists need to be alert for rapidly changing weather conditions," according to Abrams.

8. As always, if you can, meteorologists and transportation experts caution people to avoid or delay travel until a snow squall passes.

9. If you must travel, leave yourself plenty of extra time and try using secondary roads instead.