This month’s full moon, the Cold Moon, will feature another celestial event known as an occultation. On the night of Dec. 7-8, the moon will block the planet Mars from our view.

A cosmic vanishing act is about to unfold in the night sky as the full moon passes directly between the Earth and one of its planetary neighbors Wednesday night.

"December 7 brings one of those magical moments when the sky changes dramatically before your very eyes," NASA said.

During the first part of the night, Mars will appear to pass directly behind the moon as part of an event called a lunar occultation. The event will be visible across most of North America with the exception of the southeastern United States, the Northeast coast and most of Alaska. In these areas, Mars will appear to barely graze past the moon.

The exact time of the occultation will vary slightly depending on location, but according to NASA, it will start between 6:30 and 9:30 p.m., local time.

The upcoming alignment is not the first time this year that the moon and Mars have crossed paths.

"The moon passes in front of planets in the night sky several times per year," NASA explained. "In fact, it generally occults Mars itself at least a couple of times per year. But each occultation is visible from only a small portion of Earth's surface, so it's not super common for any particular spot on Earth to see them frequently." 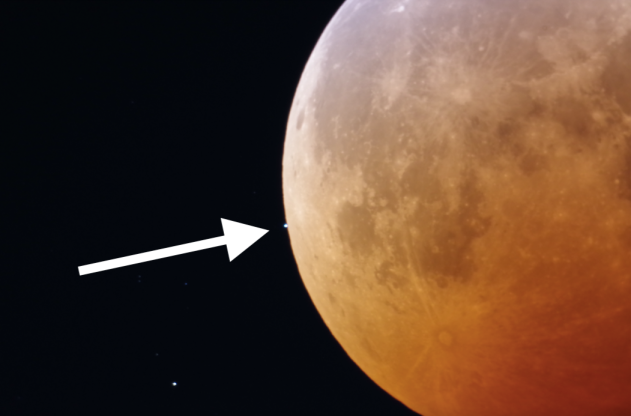 A lunar occultation on Nov. 8, 2022, with the moon passing directly between Earth and Uranus. An arrow was added to the photo to show Uranus moments before disappearing behind the moon. (Astrobinphoto)

In addition to Earth's celestial companion temporarily blocking out Mars, Wednesday night's moon will be the final full moon of 2022.

December's full moon is commonly referred to as the Cold Moon because it is the time of year when chilly air causes the temperature to tumble across North America. Other nicknames for December's full moon related to wintry weather include the Snow Moon, the Winter Maker Moon and the Hoar Frost Moon.

Folks who step outside this week to gaze upon the moon or Mars should also be on alert for shooting stars.

The Geminid meteor shower will peak on the night of Dec. 13 into the early hours of Dec. 14, but some meteors associated with the shower could streak through the sky in the nights leading up to the event's culmination.