A woman searching for rocks made the gruesome discovery — the latest to be unveiled as water levels remain at historic lows, and conditions are expected to get worse in the coming weeks, AccuWeather experts say.

A woman made a gruesome discovery along the dried-up banks of the Mississippi River last weekend, as the water level on the nation's largest river continues to fall to historically low levels.

Crystal Foster was looking for rocks along the shores of the river near Clarksdale, Mississippi, located about 80 miles downstream from Memphis, Tennessee, when she found bones that turned out to be human remains, CNN reported.

Foster contacted the Coahoma County Sheriff's Office after making the shocking discovery on Saturday, Oct. 15. Scotty Meredith, the county's chief medical examiner, told CNN that the bones were indeed human remains and included a lower jawbone, rib bones and other unidentified bones. The remains have been sent to a crime lab for further analysis, where investigators hope to collect a DNA sample. 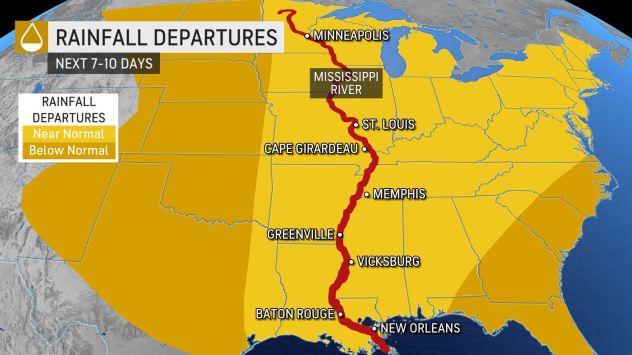 The retreating water levels on the Mississippi River are akin to the reservoirs across the western United States, where a dwindling water supply has revealed objects that have been underwater for decades. At least five sets of human remains have been identified at Lake Mead alone.

"These water levels are so low that we knew it was only a short matter of time before human remains were found," Foster told Action News 5, a news station based out of Memphis, Tennessee.

The section of the Mississippi River where the human remains were found is nearing its lowest level in recorded history. A river gauge near Greenville, Mississippi, about 130 miles southwest of Memphis, recently reported a water level of 5.7 feet, the lowest water level ever recorded at the site since record-keeping began in 1890. Other gauges in the area are not far from reaching record levels. 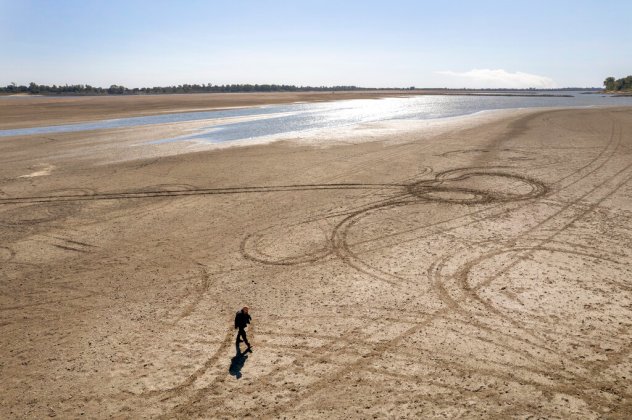 In this photo taken by a drone, James Isaacks walks where the normally wide Mississippi River would flow Thursday, Oct. 20, 2022, near Portageville, Mo. The lack of rainfall in recent weeks has left the river approaching record low levels in areas from Missouri south through Louisiana, disrupting barge and other travel along the river. (AP Photo/Jeff Roberson)

The historically low water levels brought the rare chance to walk to Tower Rock, a rock formation about 80 miles southeast of St Louis that is typically an island in the middle of the Mississippi River. Farther south down the river near Baton Rouge, Louisiana, the remnants of a shipwreck were discovered, a ship that is believed to have sunk near the shoreline during a fierce storm in 1915.

When will the Mississippi River return to normal?

The historically low water levels on the Mississippi River were months in the making, and it will take more than one big rainmaker to refill the water table.

AccuWeather expert meteorologists do not expect any significant change in historically low water levels in the Mississippi River through the end of the year – with prospects for improvement early in 2023.

"The overall pattern setting up through the end of the year doesn't look good at all," AccuWeather Lead Long-Range Meteorologist Paul Pastelok said.

The total damage and economic loss caused by the Mississippi River’s historically low water levels and related supply chain impact are estimated to be around $20 billion, according to AccuWeather.

The losses will represent a significant negative impact on the economy at a time when the country and global markets are already facing high inflation and grave financial hardship driven by a possible recession, ongoing supply chain issues and the pandemic’s lingering domino effect.

The Mississippi River is a key transit corridor for a wide variety of commodities, such as soybeans, corn, wheat, fuel oil, corn, crude petroleum, sand, gravel, limestone, and salt. Manufactured products, such as tires, may also be impacted with increased costs and reduced supply. Commerce on the Mississippi River accounts for 92% of the country’s agricultural exports, 60% of all grain exports and 78% of feed grains, soybeans and livestock exports.

Pastelok added that crews have been dredging up parts of the Mississippi to help counteract the low water levels, but it can be a timely and expensive undertaking.

"The overall pattern setting up through the end of the year doesn't look good at all."
AccuWeather Senior Meteorologist Paul Pastelok

AccuWeather’s preliminary forecast considers a variety of direct and indirect impacts, including increased costs to consumers as prices increase for various crops and commodities, increased transportation costs, job losses, shipping delays and other negative impacts on the economy.

The crisis started earlier this year when record heat baked the Mississippi River Valley in June, followed up by an unusually dry period from late summer into autumn. Additionally, no tropical systems made landfall along the central Gulf Coast like recent hurricane seasons, depriving the watershed of much-needed rain. So far, the 2022 Atlantic hurricane season has been the first season since 2016 that no tropical storms or hurricanes made landfall in Texas, Louisiana, Mississippi or Alabama.

Little to no rain is in the forecast for most of the Mississippi River Valley through the weekend, but signs are pointing to some rain spreading over areas from St. Louis to New Orleans around the middle of next week. However, this does not look like a significant rainstorm for the lower Mississippi River watershed.

In the long term, AccuWeather meteorologists say that a few storm systems could track over the region in November and December, but these systems will bring only temporary help to the ongoing situation.

"This can result in some increase in water levels for a brief time, but the expectation is that the water levels can fall back again during drier time periods," Accuweather AccuWeather Chief Meteorologist Jonathan Porter said. 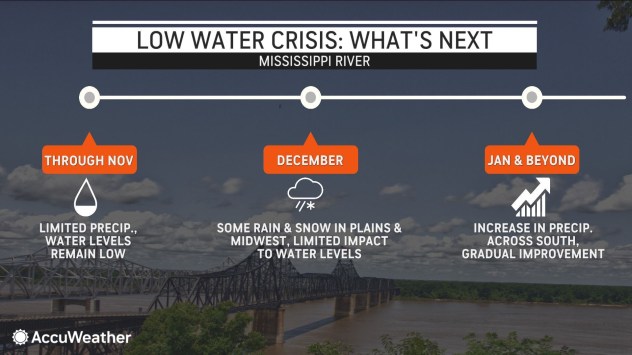 "As we move into January 2023, AccuWeather experts see signs of a changing weather pattern across the Mississippi basin with better chances for more frequent precipitation and perhaps episodes of heavier precipitation," Porter said.

It will take time, but AccuWeather believes that the new weather patterns during the opening weeks of 2023 will bring lasting improvements to the water levels on the Mississippi River.

The pattern change expected to unfold in January will likely continue through the rest of the upcoming winter with frequent episodes of rain from the Gulf Coast to the Ohio Valley. Snowfall across the northern Plains -- in the far reaches of the Mississippi River watershed -- will also help to increase the flow of the river in the long run.

Additionally, the increase in precipitation throughout the winter will provide some relief for the widespread drought that has developed across the nation's heartland. According to the U.S. Drought Monitor, most of the region is experiencing a moderate drought with a few pockets in the Plains experiencing exceptional drought, the most severe classification of drought.