Experts believe a fossilized jaw bone that was found in the drought-stricken Mississippi River belongs to an extinct lion species.

Wiley Prewitt was exploring a newly exposed area on October 26 when he came across a rather large tooth poking out of the sand. The Oxford, Mississippi, resident would soon learn it was a fossilized jawbone from a giant American lion, a species that has been extinct for roughly 11,000 years. 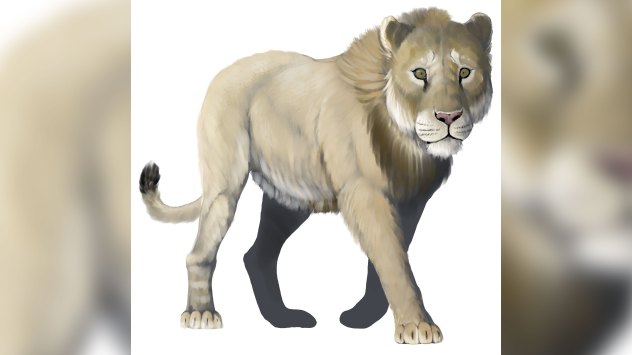 The American lion, otherwise known as Pathera atrox, was the largest extinct cat to live in North America during the last ice age, according to the National Park Service.

"I knew immediately just by the shape of the teeth that it was a carnivore fossil, but of course, I did not know that it was (an American) lion. We all know about those, but you never dream that you're going to find one," Prewitt said. "I just couldn't believe it. It was hitting the fossil lottery. "

The American lion was the largest extinct cat to live in North America during the last ice age, according to the National Park Service. Known by its scientific name, Panthera atrox, meaning "fearsome panther" in Latin, the species was 25% larger than a present-day African lion, standing at 4 feet tall at the shoulders and measuring 5 to 8 feet in length. American lions weighed between 500 to 800 pounds on average, although some of the biggest may have topped 1,000 pounds, the park service notes. 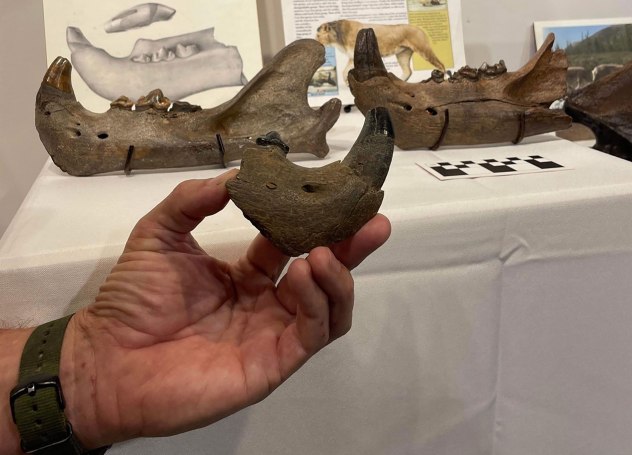 A rare American lion fossil has been discovered near the Mississippi River. The tooth, pictured, has a fragment of the jawbone still attached.

Three days after Prewitt's find, the Mississippi Fossil and Artifact Symposium & Exhibition hosted an event featuring previously discovered American lion fossils. Prewitt took the fossil in the hope of having experts identify it, but he didn't know how significant his find would be to understanding a little more about Mississippi's past.

"When (Prewitt) whipped out that anterior portion of a lion jaw, I knew right away what it was," said George Phillips, curator of paleontology at the Mississippi Museum of Natural Science, who was at the event. "Who would have thought in a million years that another lion fossil would show up, considering that they're rare, at an event (in) which the theme was the American lion?"

While the fossil was not a complete jawbone, plenty was left to identify the specimen easily, Phillips said: It had a significant gap between the canine and the premolars that could only belong to the American lion. After observing other fossils from the same species at the event, Phillips said it was easy to narrow down the other carnivore possibilities and confirm that he was looking at another fossil from the lion. 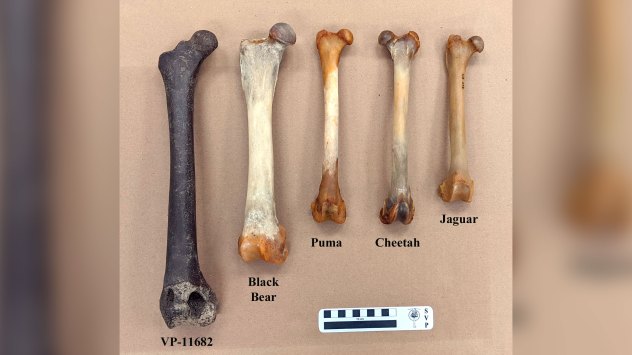 The American lion stood 4 feet tall at the shoulders and measured 5 to 8 feet in length. A femur from the species is the newest addition to the MMNS collection. It is pictured next to other femurs of predators commonly found today.

One week after that surprising discovery, a local wildlife officer pulled a large American lion femur from the river's sediment, resulting in another fossil from the same scarce species being added to the museum's collection, Phillips told CNN.

Carnivore fossils are much harder to find in comparison with their prey counterparts, according to Phillips. Two American lion bone discoveries within a week or so is unbelievable, he said, calling it "just an incredibly rare fossil."

Prewitt plans to donate the fossil he found to the museum in Jackson, which would make it the fourth addition to the institution's collection of American lion bones, counting the addition of the newly found femur.

"The interesting thing about the river is that every year is different. When the river comes up, the high water exposes different things and covers up other things. So here, you are always looking at new sites," Prewitt said. "The fossils really make you contemplate deep time, and I think that, for me, that is really part of the magic of it." 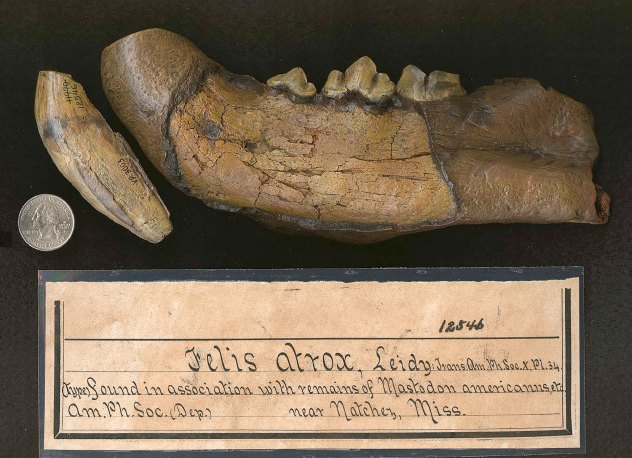 The first fossil of the American lion was a lower jawbone, found in Natchez, Mississippi, in 1836. It was identified nearly 20 years later by paleontologist Joseph Leidy.

The first fossil of the American lion was found in Natchez, Mississippi, in 1836, but paleontologist Joseph Leidy didn't identify it until nearly 20 years later. Leidy found that the fossil, a lower jawbone, belonged to a never-before-discovered species. It was larger than the extinct European cave lion, the largest known member of the cat family at the time. Before then, it was unknown that giant lions had roamed North America.