AccuWeather meteorologists are tracking a slow-moving storm that is likely to put a damper on Memorial Day weekend in parts of the Midwest and Northeast. The storm will not only keep conditions cool for the unofficial start of summer but could also trigger travel-disrupting rainfall over the holiday weekend.

The storm arrived along the Pacific Ocean then pushed across the northern third of the western United States on Tuesday night. It will trigger showers and spotty thunderstorms as it moves along. As this system pushed east of the Rockies on Wednesday, it became energized.

The storm tapped into moisture from the Gulf of Mexico as it moved eastward along a zone where clashing air masses -- with cooler air to the north and hot and muggy air to the south -- collided. It will advance across the Midwest into Thursday and then the central Appalachians and mid-Atlantic Friday into Saturday. Eventually, the cool air will sweep southward in the wake of the storm with relief for those in the Southern states enduring an early-season heat wave.

On the storm's cool northern side, clouds are expected to be thick, and steady rain is forecast to fall for a time. Where the steadiest rain falls will depend on the exact track of the storm.

As the storm shifted across the northern Plains, the steadiest rain fell on drought-stricken areas bounded by Interstates 90 and 94, which includes portions of eastern Montana, the Dakotas and southern Minnesota Wednesday to Wednesday night. 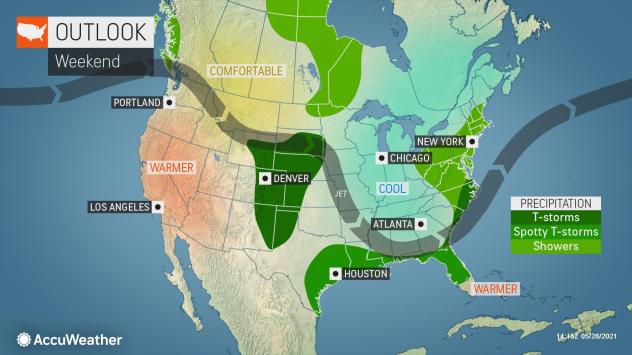 Then, a large complex of severe thunderstorms is forecast to develop just south of the steady rain area and could hit areas along I-80 especially hard in Nebraska and Iowa into Thursday morning.

On Thursday, the rainy portion of the storm is forecast to push through the Midwest. Cities such as Minneapolis, Chicago and Milwaukee are expected to pick up at least some rain from the storm.

As the storm continues to crawl eastward, wet weather is forecast to spread across southern Michigan and much of Ohio and Indiana during Thursday night and Friday.

Rainy conditions are then in store for much of Pennsylvania, northern West Virginia, northern Maryland, the southern tier of New York state, much of New Jersey, northern Delaware and the south coast of New England on Friday and Friday night. 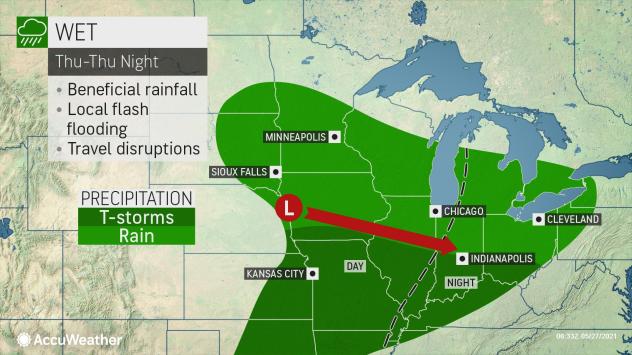 The storm will strike as holiday travel is expected to ramp up. AccuWeather forecasters say motorists should expect more delays than normal even for holiday travel, as well as poor visibility and dangerous conditions at times in the heaviest rain.

AAA is predicting 60% more travelers than last year to hit the road this Memorial Day weekend, albeit still lower than pre-pandemic levels. The association predicted that more than 37 million people will travel 50 miles or more from home for the holiday. Last year, only 23 million traveled for Memorial Day, setting a record for the lowest volume since AAA began recording travel trends in 2000, as the nation grappled with the coronavirus pandemic.

As more travelers take to the roads and skies, the cloud ceiling and visibility in general may be low enough to lead to airline delays at Pittsburgh, Baltimore, Washington, D.C., Philadelphia and New York City, as well as regional airports in the central Appalachians and mid-Atlantic states.

Temperatures during the rain in much of the Midwest, central Appalachians and mid-Atlantic will be unseasonably cool for the last days of May. Much of the time temperatures are forecast to range from the 50s to the lower 60s F. Average highs this time of the year in the rain zone are in the 70s. Not only will an umbrella be a necessity for those heading out or spending time outdoors, but also long sleeves and jackets or a fleece, AccuWeather forecasters say. 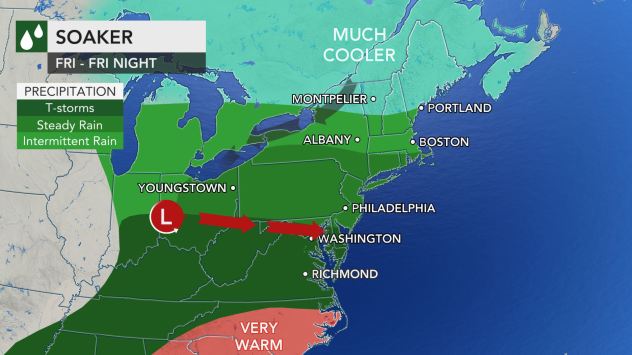 South of the swath of steady rain, thunderstorms are forecast to rumble from the central Plains to the middle part of the Mississippi Valley, the Ohio and Tennessee valleys, the southern Appalachians and Chesapeake Bay region as the storm moves along from Thursday to Friday.

Storms may become especially violent with the risk of tornadoes in the warm and humid air over the southern Plains on Thursday.

Even though the main part of the storm is forecast to move slowly off the mid-Atlantic and southern New England coasts over the weekend, a secondary feature associated with the storm may continue to cause trouble across parts of the Midwest and the Northeast.

Spotty showers will linger from parts of Ohio all the way to coastal areas of Virginia, Maryland, Delaware, New Jersey and southern New England on Saturday. The unsettled weather will be associated with a trailing disturbance marked by a small southward dip in the jet stream along with cold air at mid-levels of the atmosphere. Coastal areas are likely to remain cloudy all or most of Saturday with spotty light rain and drizzle, but breaks of sunshine could stir the atmosphere enough to produce spotty thunderstorms amid the showers over the central Appalachians. 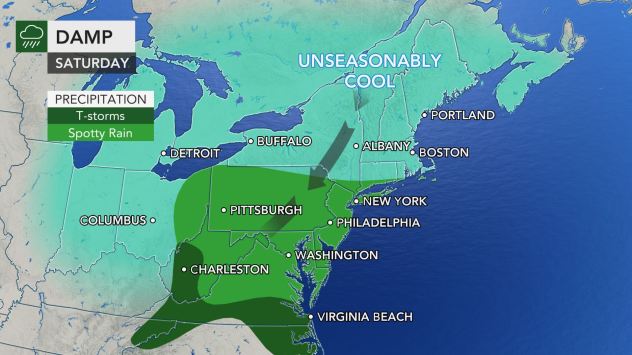 Where sunshine returns the Midwest on Saturday and Sunday, temperatures are expected to rebound by an average of 10-15 degrees compared to the day before when the clouds and/or rain will suppress highs.

For example, high temperatures at Indianapolis will trend upward from the lower 60s on Saturday to the lower 70s on Sunday for the Indy 500 as sunshine returns following cloudy and wet conditions for events scheduled on Friday.

As the plunge in the jet stream swings into the Northeast, enough dry air may be around to prevent showers and thunderstorms in the zone from Ohio to central Pennsylvania on Sunday, AccuWeather Meteorologist Isaac Longley said.

"Much to the dismay of beachgoers, the snail's pace movement of this feature is likely to keep clouds around and continue the risk of shower activity along the coast from Virginia to Maine on Sunday," Longley explained. 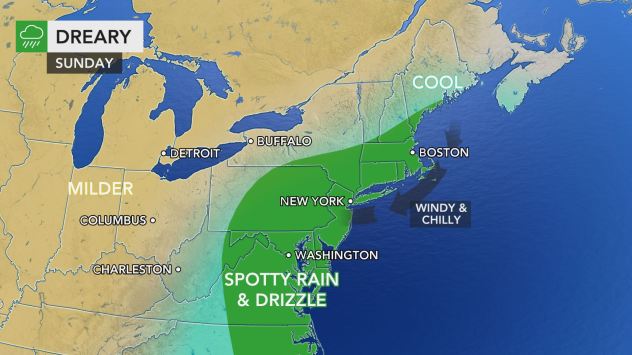 The combination of cloud cover, cool air with temperatures no higher than the 60s and water temperatures ranging from the upper 50s in eastern New England to the upper 60s in southeastern Virginia may not make for the most pleasant beach weather on Saturday and Sunday in the Northeast.

There is hope for some improvement in the weather overall for Memorial Day itself in the Northeast, perhaps including at the beaches, provided the offshore storm does not make a northward lunge across eastern New England.

"Much of the Northeast region, including most coastal areas, should be a bit warmer on Sunday thanks to some sunshine with widespread highs in the 70s," AccuWeather Senior Meteorologist Brett Anderson said.

However, there is an alternate scenario in which much of the Northeast stays dreary on Sunday if the storm lingers. This would also mean another day with temperatures well below normal.

The weather over much of the Midwest is forecast to be generally dry with highs in the 70s on Memorial Day for ceremonies honoring America's military personnel who gave their lives for the nation. One exception to that trend may occur with the approach of another storm system that may set off showers and thunderstorms in parts of the Dakotas and Minnesota later Sunday and Monday.