Storm chaser Scott Peake captured this tornado touching down near Selden, Kansas, on May 24. The tornado can be seen growing as it spins rapidly and crosses a road while debris gets sent flying.

A large and extremely dangerous tornado tracked near Selden, Kansas, on Monday evening, injuring one person and leaving a trail of damage. The twister struck around 6:30 p.m. CDT, the Sheridan County Emergency Management confirmed. It damaged buildings, homes, a silo, trees, and overturned a semi truck and a train.

On Tuesday, the National Weather Service gave the tornado a rating of EF1, with estimated peak winds of 110 mph.

The dangerous weather was spawned by a severe storm that had a history of spinning up tornadoes along its path as it charged across northwestern Kansas.

The thunderstorm first developed southwest of Goodland, Kansas, around 3 p.m. CDT, according to AccuWeather Senior Meteorologist Dave Bowers. It then tracked northeastward ahead of a frontal boundary, where over the next few hours, it repeatedly dropped tornadoes that touched down for a few minutes at a time.

"There were nearly a dozen tornado reports from this one supercell. The last report coming at 6:26 p.m. CDT at Selden with tree and power line damage along with one injury,” Bowers said.

Town of Selden, KS took a direct hit from a tornado. At least EF-1 to possibly EF-2 damage #kswx pic.twitter.com/5ZWdEDy3Rf

Storm chaser Scott Peake got an up-close view of the tornado touching down near Selden, Kansas. He captured footage of the tornado growing and spinning as Peake approached in a vehicle. The twister can be seen sending a massive sheet of metal flying across a roadway right in front of him.

Another group of chasers that collects data from inside and near tornadoes, called CONVEX, captured footage from farther away after an intercept probe was dropped in the path of the storm. People from the team can be heard yelling, “Oh, no! Oh my God!” and “It’s hitting the town!” as the video rolls on, before they scramble to move farther away.

According to KSNW, the local NBC station, there were no serious injuries reported, but plenty of damage to property. KSNW reported that the local sheriff said 38 properties sustained significant damage and 84 other properties suffered minor damage.

“This town will rebuild," Sheridan County Fire Training Chief Steve Hirsch, said, according to KSNW. "And it’ll be just as strong as it was before, because of the people that live here. They’ve survived droughts, and they’ve survived tornadoes, and they’re going to survive this tornado,” Hirsch said. 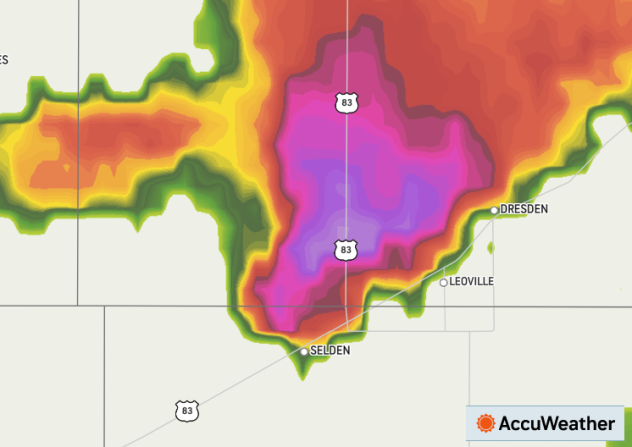 Central US to remain target of severe weather dangers
How one pioneer earned the nickname ‘Mr. Tornado’
Scientists were first who dared to forecast ‘an act of God’