How are tornadoes rated using the Enhanced Fujita Scale?

The Fujita Scale is used to estimate the wind speed within a tornado. AccuWeather explains the scale and where it originated.

The National Weather Service categorizes tornadoes by a number rating, from zero to five, after assessing the twister's inflicted damage according to the Enhanced Fujita Scale.

The original scale is named after Dr. Ted Fujita, who developed the system to help provide a wind estimate for the amount and type of damage that occurred from a tornado. In 2007, the Enhanced Fujita Scale (EF0 through EF5) was developed by a group of experienced and renowned meteorologists and wind engineers to make improvements on how the wind speeds were estimated.

"The EF Scale takes into account more variables and provides a better overall estimate of the wind speed due to the associated storm damage than what the original F-Scale provided. The EF Scale looks at 28 damage indicators such as trees, building types and structures," said Guy Pearson, director of weather warning service for AccuWeather Enterprise Solutions.

According to Pearson, for each of these indicators there are eight degrees of damage starting with visible damage all the way up to complete destruction. These factors were not taken into account by the original F Scale. The F Scale and EF Scale have been used in rating tornadoes since 1971. 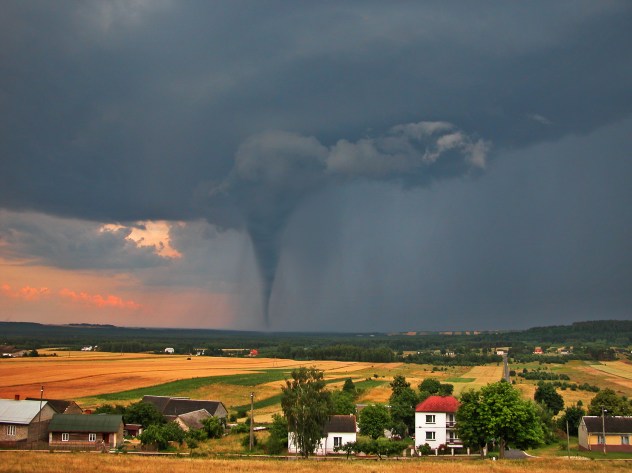 View of the countryside and stormy sky with a tornado in the background. (Tokarsky/iStockphoto/Getty Images)

"After a tornado passes, the NWS will typically send out a team or teams of meteorologists to do direct ground surveys if the tornado caused numerous injuries or death, impacted populated areas or produced extensive damage," Pearson said.

Pearson said not all tornadoes have a storm survey completed by the NWS such as weaker tornadoes that do minor damage or are believe to be short-lived. For those tornadoes, the NWS usually relies on photos, a storm spotter and chaser reports to estimate an Enhanced Fujita rating.

"On the flip side, if the event was an outbreak or an unusually destructive event, which only happens a few times a year, the NWS may bring in highly experienced survey experts, wind engineers and/or do an aerial survey to help determine the exact path and/or to get an idea of the extent of damage to help rate the tornado," Pearson said. 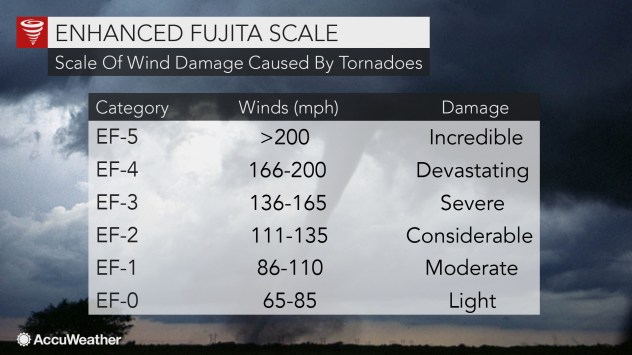 The time it takes to rate a tornado depends on a number of factors.

The NWS sends out a storm survey as soon as they can. Usually, if a tornado occurs in the morning, they have a team go out that afternoon; however, most afternoon and evening tornadoes are not surveyed until the next day.

The average time it takes the NWS to do a survey and to have at least a preliminary rating is one to two days, maybe even three to four days for an outbreak.

"Not only does it take time for personnel to go out into the field and do the survey, but they do have to get back to the office, analyze all of the data and then publish the preliminary report across multiple dissemination methods," Pearson said.

6 life-threatening tornado myths debunked
The difference between tornado watches and warnings
Which areas around the world are most prone to tornadoes?

"If there are initial pictures of a tornado or live streaming video, then in some instances you can estimate and narrow down what a rating might be into a couple of different categories. However, narrowing it down to just one category would be difficult just by looking at the tornado," Pearson said.

Below are some of the damage assessments that may noted based on the different Enhanced Fujita tornado ratings.