A storm is beginning to brew just off the Atlantic coast this week and will bring steady rain to a region that badly needs it, according to AccuWeather meteorologists.

The storm is taking shape about 100 miles out to sea. Because of its distance from the East Coast, the storm's most dramatic impacts such as heavy rain and strong winds, which are typical of a wintertime nor'easter, may be confined to places such as eastern Massachusetts, New Hampshire, Maine and New Brunswick, Canada.

For a time on Monday, it appeared as though the storm may develop too far out to sea to bring steady rain to Massachusetts. Based on the gathering of showers and thunderstorms farther west on Tuesday, the storm was taking shape about 100 miles closer to the New England coast. 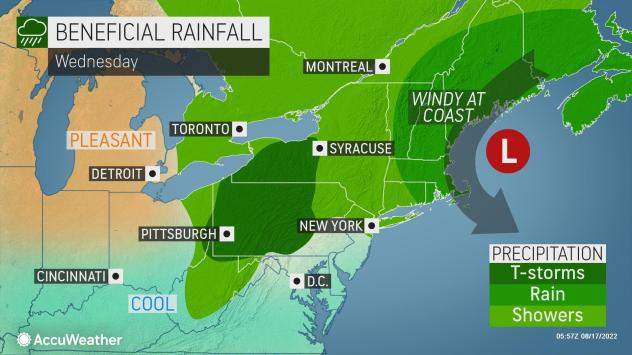 Much like with a winter coastal storm, locations such as Boston; Providence, Rhode Island; and Portland, Maine, will fall in the zone where heavy rain and gusty winds occur for a time.

Steady rain is likely to move into eastern New England and Atlantic Canada as the storm pivots northward into Wednesday and then slightly to the northwest on Thursday. Winds may get strong enough to break tree limbs and cause sporadic power outages in southeastern Massachusetts on Wednesday. Minor coastal flooding can occur in eastern Massachusetts, where north-northeast winds cause water to pile up along the shoreline.

However, over the mid-Atlantic and southwestern New England, rainfall will be much more spotty and come in the form of sporadic showers and a few thunderstorms. Experts say that while intense downpours and flash flooding in urban areas can occur, these incidents are likely to be quite isolated. 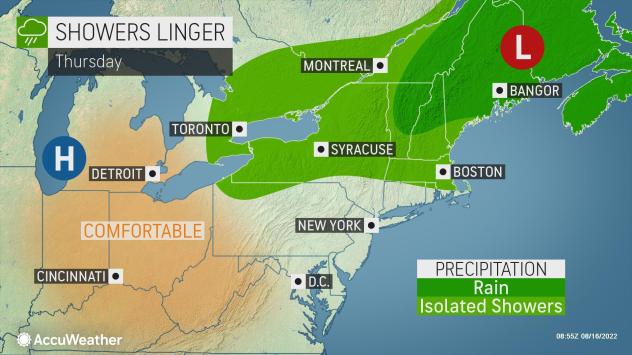 The energy in the atmosphere that will help the offshore storm form has already caused damaging impacts over land. From Sunday night to Monday, this feature managed to bring up to 6 inches of rain which triggered localized flooding in parts of West Virginia and Virginia. Charleston, West Virginia, picked up nearly 4.5 inches of rain in less than 12 hours from Sunday evening to Monday morning.

Farther south, impacts came in the form of locally severe thunderstorms. Over 15 reports of damaging winds were received by the Storm Prediction Center, stretching from Virginia to Alabama. In the Florida Peninsula, intense storms produced hail at several locations.

Most homeowners in the Northeast will be happy to get any non-flooding rain that they can get in the pattern as drought conditions have taken a toll on lawns and gardens this summer. However, in inland areas, many may be disappointed in the amount of rain that actually falls outside of isolated torrential downpours. 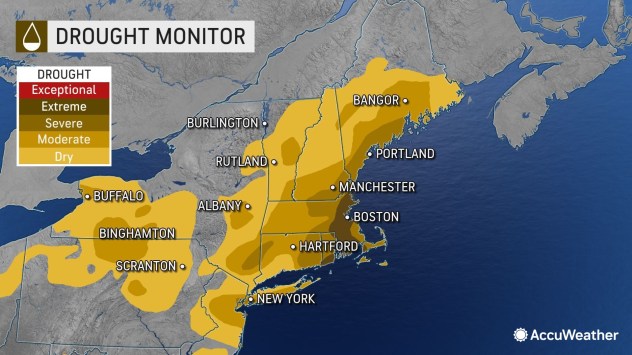 Even when steady rain is not falling, the offshore storm can still pack enough punch to deliver more in the way of shower activity and gusty winds in southern New England this week. This stretch of coast is very popular for beach, boarding and boating activities in August as water temperatures typically reach their highest point of the year during this part of the summer.

"Beachgoers on Cape Cod, Massachusetts, and the islands will have to contend with stiff winds and rain at times, especially from Wednesday to Thursday," AccuWeather Senior Meteorologist Dean DeVore said.

Coastal winds could be too strong to safely deploy beach umbrellas on Wednesday. Earlier in August, a woman in South Carolina was fatally injured by a beach umbrella that came loose during breezy conditions.

Winds from the north and northeast are likely to average 12-25 mph with gusts perhaps near 40 mph at times from Rhode Island to eastern Massachusetts and southeastern New Hampshire by midweek. Winds are likely to be active, but not quite so strong, farther south over much of the mid-Atlantic.

The strong winds offshore of New England will generate significant wave action that could be a hazard for boaters and offshore fishing interests. Swimmers this week could be at risk for more frequent and stronger rip currents than on average August days.

However, the most noticeable part of the weather pattern by far this week will be the persistent cool air.

Parts of the region, especially in many interior areas, got a taste of the cool air this past weekend. Temperatures dipped into the upper 30s and lower 40s F during the early-morning hours over the central and northern Appalachians.

These areas are not likely to get that cool again this week due to the blanketing effect of cloud cover at night. The September-like air will tend to sprawl toward the mid-Atlantic and New England coasts due to the circulation of the offshore storm and a southward dip in the jet stream.

Temperatures will average as much as 15 degrees below normal along much of the Interstate 95 corridor through Wednesday. Highs will be in the mid- to upper 60s in Boston, and within a few degrees of 80 in New York City. The high on Tuesday in the Big Apple was slightly above this mark, hitting 82 degrees at Kennedy International Airport, but will be lower on Wednesday.

High temperatures mainly in the low 80s are likely in Washington, D.C, such as Tuesday's high of 82.

Over the Appalachians, highs will range from the mid-60s to the upper 70s through midweek, when departures of 8-16 degrees below normal will be common. In the heart of the Appalachians, the city of Roanoke, Virginia, hit a high of 71 on Tuesday, compared to a typical high of 87. 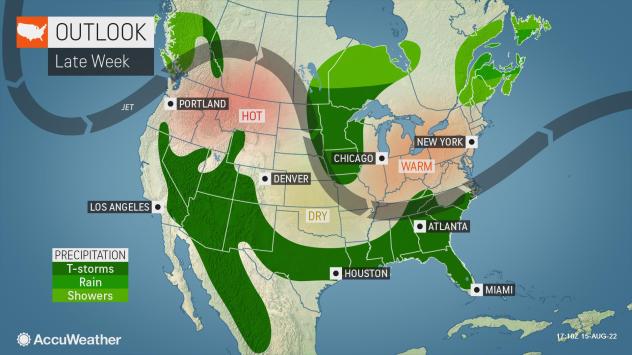 "The jet stream dip and the cool air will lead to conditions favorable for waterspouts over the Great Lakes, especially on Erie, Ontario and Huron through midweek," AccuWeather Meteorologist Brandon Buckingham said. "Steering breezes may direct these mini storms toward the southwestern shorelines, rather than the more common southeastern shorelines of these lakes."

Damaging waterspouts on the Great Lakes are extremely rare, but when any whirlwind of this sort wanders onshore, it can lead to dangerous conditions.

As the offshore storm pushes into Atlantic Canada and the jet stream dip begins to lift northward, temperatures will trend upward and the amount of daily shower and thunderstorm activity will diminish over the Northeast during the latter part of this week and this weekend. Highs within a few degrees of average are in store for Friday and Saturday.