Days after he tragically lost his wife, Mike Perreault described how the incident unfolded and also urged beachgoers around the country to be cautious around the large umbrellas. 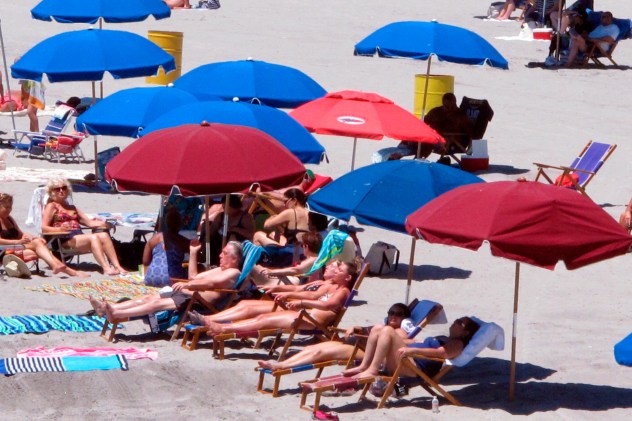 In this July 9, 2018 photo, beach-goers huddle under beach umbrellas on the sand in Atlantic City, N.J. The New Jersey Legislature is considering a bill in February 2020 to require beach umbrellas to be tethered to the sand to prevent injuries from flying umbrellas. (AP Photo/Wayne Parry)

The husband of a woman who was struck and killed by a beach umbrella in South Carolina last week appeared on ABC's Good Morning America and NBC's Today show to recount his traumatic experience.

“It was a regular breezy day, no other umbrellas or beach blankets or anything got foiled,” Mike Perreault told NBC on Saturday. “Just this one umbrella.”

The airborne umbrella came toward the couple and four of their friends from about 40 feet away, he said. Everyone ducked, except for Tammy.

Tammy was rushed to Waccamaw Hospital, where she was later pronounced dead. Her husband is now urging beachgoers to be cautious around the large umbrellas.

"Keep your eyes open; it could have been a 10-year-old kid and it just so happened that it was my wife," he told Good Morning America.

Sherry White, one of Tammy's best friends, also witnessed the accident. White told local station WMBF she had a love for life and was a deeply caring person, not just with friends but with others as well.

“She was the most loving and kind person I think I ever met. She never had a bad word to say about anybody,” White said. “She always put others first, and her husband and her were inseparable. If you saw Mike, you saw Tammy. They had a great passion and love for each other."

From 2010-2018, an estimated 2,800 beach umbrella-related injuries were treated in emergency departments nationwide, according to the U.S. Consumer Product Safety Commission.

The accident in South Carolina follows a storm on Aug. 5, that hit Bethany Beach, Delaware, hurtling dozens of beach umbrellas across the sand and into the ocean. No one was reported injured during the episode. The video is a stark reminder that even during sunny, mild days, wind gusts are common on the beach and winds of just 10-15 mph can send beach umbrellas soaring into the air in seconds.

The wide canopy of a beach umbrella can get caught up in swift winds if it's not anchored properly, according to the product safety commission.

Experts suggest beachgoers follow some basic safety tips to prevent such tragic accidents, including securing a beach umbrella deeply in moist sand -- buried about 2 feet into the sand -- and with an anchor, such as an auger, to stabilize the covering.

They also recommend placing an umbrella on flat ground and tilting it into the wind to keep it from blowing away and injuring someone. Angling it against the wind will also help push the umbrella further into the sand.

U.S. legislators over the years have tried to raise public awareness of the beach hazard. U.S. Sens. Tim Kaine and Mark Warner, of Virginia, asked the CPSC agency to review safety rules for beach umbrellas and start a safety campaign after a Virginia woman was killed by an umbrella in 2016.

The New Jersey Legislature was considering a bill in 2020 that would have required beach umbrellas to be tethered to the sand to prevent injuries from flying umbrellas.

Weather News Infant dies after being left in hot car in Washington, DC