Like quicksand in the middle of a road, a flooded sinkhole suddenly devoured a vehicle as the woman behind the wheel tried desperately to break free to safety.

Bystanders quickly sprung into action Tuesday night to rescue a woman who became trapped in her vehicle as it was being sucked into a large sinkhole amid rushing floodwaters.

The woman, whose age and identity were not released, was driving a white sedan near downtown El Paso, Texas, following a huge water main break when the roadway became quickly overrun with water.

The vehicle got stuck at the intersection of Gateway Boulevard South and Yandell Drive when the swirling, rushing water inundated the car and the force of a flooded sinkhole below began swallowing the vehicle – first the front end and then the midsection.

Footage taken by Enrique Duenas-Aguilar, spokesperson for the El Paso Fire Department, shows the car partially submerged and sinking further and further underwater as every second ticks by when one-by-one good Samaritans and firefighters come to her rescue.

With a rope tied to the rear end of the car, the group of 10 men ankle- and knee-deep are seen steadying the metal frame, keeping it from completely submerging, while others pull the woman out through the back windshield. 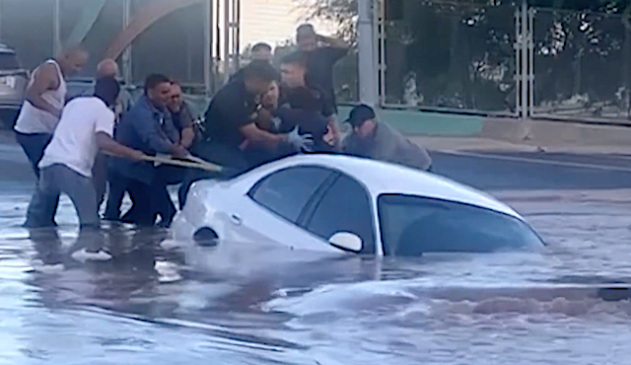 Bystanders and firefighters help a woman stranded in floodwaters, from a car that was being swallowed by a sinkhole. (El Paso Fire Department)

Once the driver had safely escaped, the rescuers let go of the vehicle then, mere seconds later, it was devoured by the sinkhole with only its rear bumper showing.

Duenas-Aguilar said three firefighters who responded to the scene were treated for minor injuries suffered “when they broke the back window to get the woman out,” Storyful reported. The woman in the car was also transported to a hospital with minor injuries, he said.

“Thirty seconds more and she would’ve been dead,” a witness told CBS News.

Officials with the Texas Department of Transportation arrived on the scene to examine the sinkhole, which opened up due to the water main break.

The scene looked more like the aftermath of a rainstorm. Photos from the fire department also showed a fallen traffic light and mud strewn across area streets from the gushing water.

In fact, El Paso has been rather dry this year with less than half the normal rainfall so far and just 0.15 of an inch so far in August.