Everything to know about waterspouts across the Great Lakes

AccuWeather Meteorologist Jake Sojda explains what waterspouts are and why they are so prevalent during the end of summer and early fall in the Great Lakes.

A waterspout can simply be defined as any tornado over a body of water; however, when describing the formation and life cycle of these columns of rotating air and water, things can get a bit more complex.

The formation and origin of waterspouts can largely be put into one of two categories: formation from a supercell thunderstorm and what is known as "fair weather waterspouts."

Fair weather waterspouts occur just as the name would suggest -- during fair weather. The skies above may be dotted with puffy cumulus clouds with breaks of blue sky in between.

While these waterspouts can occur in nearly any month out of the year, there is somewhat of a concentrated season for this phenomenon to occur. During the late summer and fall months when cold air from Canada intrudes southward into the United States, peculiar weather conditions can occur as cold air sits over the warm lakes. 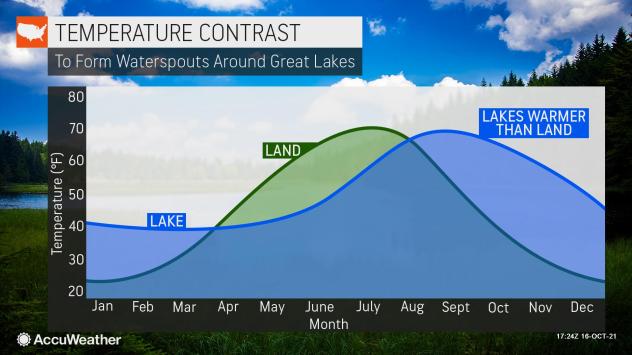 As the cool air passes over the relatively warm lakes, the atmosphere develops a shallow layer of unstable conditions just above the surface of the water, which in turn leads to rising motion. Puffy cumulus clouds can then form, which have the potential to produce waterspouts.

The turbulent motion of the air near the surface of the water as a result of the instability in place can lead to a vortex of swirling winds. If strong enough, water from the lakes can then be sucked up to form a condensation funnel, i.e. a waterspout. A key difference between a fair weather waterspout and a super cellular waterspout is that fair weather waterspouts form at the surface of the water and grow upward, while super cellular waterspouts form from the base of the cloud and extend downward. 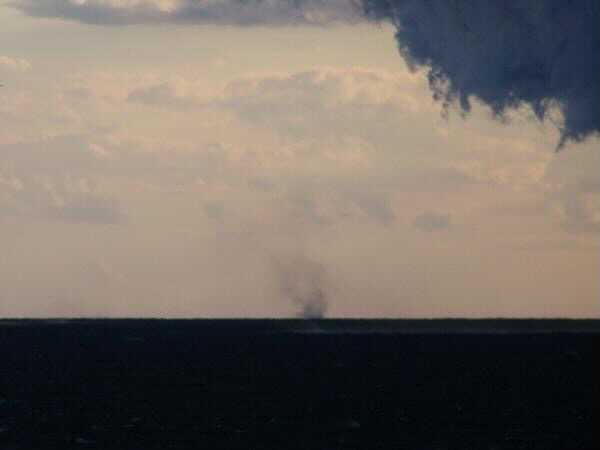 A fair weather waterspout seen from the shores of Grand Haven, Michigan. Note how the condensation funnel begins at the surface of the water and not at the base of the cloud. Image taken by AccuWeather Meteorologist Brandon Buckingham.

Waterspouts that form as a result of a supercell thunderstorm are created through the same processes that occur in the typical Tornado Alley in the Plains.

A supercell thunderstorm capable of producing waterspouts or tornadoes needs a very specific set of atmospheric conditions in place in order to form. In these thunderstorms, waterspouts are only one of multiple weather hazards that can be produced. Hail, strong wind gusts and frequent lightning commonly occur within these powerhouse thunderstorms. 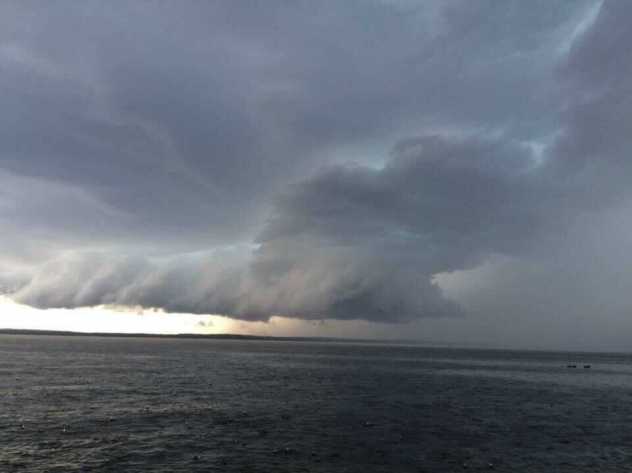 An image of a supercell capable of producing a waterspout over Houghton Lake, Michigan. Image taken by Accuweather Meteorologist Brandon Buckingham.

The main atmospheric factors that are required to produce supercellular thunderstorms are shear, lift, instability and moisture.

Shear, or the changing of wind direction and speed of the wind with increasing height, is an absolute necessity because it is those large-scale changes of the wind profile that result in the eventual production of a rotating thunderstorm.

Having a mechanism in place to "lift" the air is also required. This often occurs in the vicinity of a front such as a warm front, cold front or a dry line.

To some degree, an unstable atmosphere is also needed. This occurs when cold air lays over top of warm air that is being lifted upwards. When that warm bubble of air is forced up into a layer of air colder than itself, it will continue to rise until it hits a stable equilibrium level.

Finally, moisture is the last requirement for the formation of supercells and the eventual formation of tornadic activity over water or land. For clouds to form, a moisture source is needed, and oftentimes for the Great Lakes region, this originates from the Gulf of Mexico.

When all of these ingredients come together in the correct fashion, supercell thunderstorms capable of producing waterspouts are entirely possible.

What to do if you're on a boat during a waterspout

Even though wind gusts from waterspouts usually pale in comparison to that of land-based tornadoes, the risks associated with getting too close to one can be life-threatening. In an instant, a waterspout can flip small vessels, leaving passengers scrambling.

So, what are a few things you can do to keep yourself safe?

The first thing to do if you're caught on a boat in any kind of adverse weather is to tune into a National Oceanic and Atmospheric Administration weather radio broadcast to see if any special marine warnings are in effect. Even better yet, be sure to check the forecast prior to heading out on the water to see if there may be any potential weather-related hazards.

If you're out on the water and witness the formation of a waterspout, take a moment to try and note what direction the spout is moving. Once the general storm motion is analyzed, turn your boat perpendicular to the path and drive away. For example, if you see a storm to the north of you and notice that it is traveling to the east, point your boat to the south and drive until you are well enough out of the way. 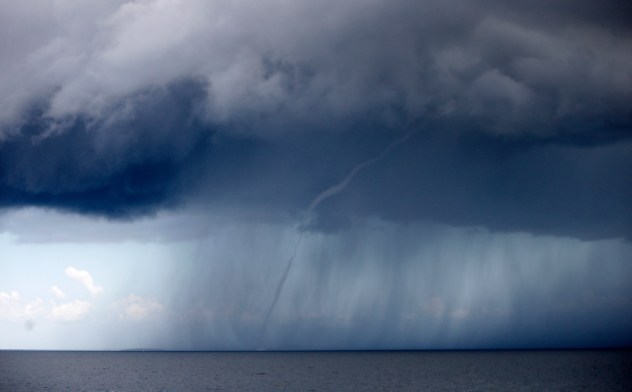 A waterspout is seen as it dissipates on Tuesday, July 12, 2016. (AP Photo/Gerald Herbert)

With just a little bit of savvy cloud identifying skills, you may even be able to spot a likely zone where a waterspout can form. Keeping an eye out for a crisp, dark and flat cloud base can increase your odds of seeing one and steering clear of the area.

Why you should check cars for flood damage before buying