Weather for Macy's Thanksgiving Day Parade will be a '9.5 out of 10'

Recent years have been among the windiest and coldest Thanksgivings on record in New York City, but those will feel like a distant memory on Thursday morning.

The annual Macy's Thanksgiving Day Parade is a New York City tradition that dates back to 1924 and signals the start of the holiday season across the United States. Millions of spectators travel to the Big Apple and line the streets to watch the parade, which in some years means shivering from frigid winds or being soaked by bouts of rain.

What will the weather be like for the Macy's Thanksgiving Day Parade?

• By late-November standards, the weather for the parade will be a 9.5 out of 10, according to AccuWeather Senior Meteorologist Dave Dombek. He added that there are "no weather concerns whatsoever" with light winds and temperatures in the 40s throughout most of the parade.

• "For spectators watching the parade, make sure you have sunglasses on, especially if you are faced into the sun," Dombek added. Folks staying out of the sun should prepare for an extra chill with AccuWeather RealFeel Shade™ temperatures in the 30s.

Elsewhere across the country: Where weather could dampen Thanksgiving Day. 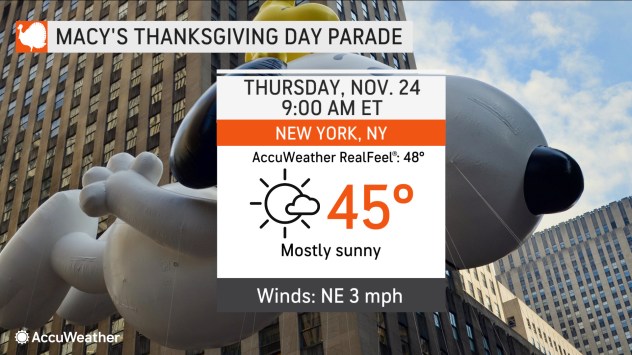 Weather has been a significant factor in recent years:

• High winds in 2019 almost kept the iconic balloons grounded, but a last-minute decision by the New York City Police Department allowed the balloons to fly. City regulations say that the balloons should not fly if sustained winds are above 23 mph or if there are frequent gusts over 34 mph.

• An early outbreak of wintry weather made for the coldest Thanksgiving Day parades in New York City history in 2018 with a low temperature of 17 before the parade and temperatures in the 20s throughout the parade.

•The warmest Thanksgiving in New York City history was in 1941 when the mercury topped out at 72, and the rainiest was in 2006 when 1.72 inches fell over the city, according to Climate Central.

• The weather will turn wet by Black Friday across much of the East Coast, disrupting holiday shoppers and people traveling after Thanksgiving. Dombek warned that more disruptive weather will arrive Sunday with periods of rain in New York City. 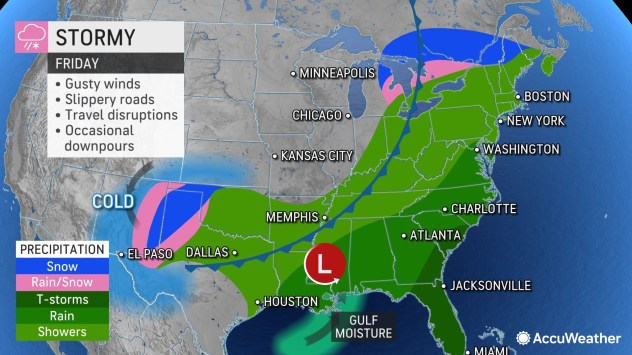 The top 10 Thanksgiving travel destinations in 2022