Giant Thanksgiving storm to bring brunt of impacts to southern US

The coast-to-coast storm will unleash a wide array of hazards in the region ranging from disruptive rain and thunderstorms to heavy snowfall — and the impacts will be felt into the extended holiday weekend.

The south-central and southeastern portions of the United States are expected to bear the brunt of impacts from a giant cross-country storm on Thanksgiving Day and persisting into the holiday weekend. AccuWeather meteorologists say that the storm will cause numerous delays for holiday travelers and Black Friday shoppers as dangers like flooding develop over the extended holiday weekend.

An upper-level storm, the first ingredient of a double-barreled Thanksgiving weather system, swept across the western U.S. through the first half of the week. As it encounters moisture surging northward from the Gulf of Mexico, a major storm will take shape over the southern Plains and Mississippi Delta region on Thanksgiving Day. 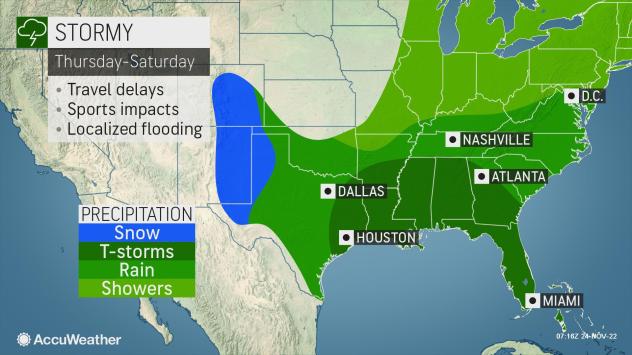 "As the storm evolves from Thursday to Friday, rain will fill up some rain gauges in the lower Mississippi Valley and Southeast, especially from eastern Texas to northern Georgia, upstate South Carolina and western North Carolina," AccuWeather Senior Meteorologist Bill Deger said.

As the second part of the storm overlaps the first, and where thunderstorms are thrown into the mix from Thursday to Saturday and early Sunday, a general 4-6 inches of rain is likely to fall on portions of the Interstate 10 and 20 corridors with an AccuWeather Local StormMax™ of 12 inches in the rainiest spots.

"Because of drought conditions in the area, and with low water levels on most rivers, lakes and reservoirs, the rain is not necessarily unwelcome, but the timing will be inconvenient, as it will arrive just in time for the holiday and impact some outdoor plans and travel," Deger said.

Given the magnitude of the duo storm system, urban flooding is likely as well as flooding in low-lying areas. 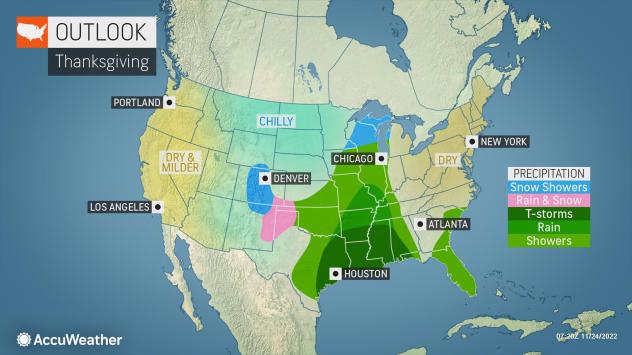 Motorists could encounter poor visibility and excess water on the roads in the Interstate 10, 20 and 40 corridors. Given the volume of vehicles on major highways and secondary roads, the weather conditions and traffic could be a dangerous combination. AccuWeather forecasters advise that people allow extra time to get to their destination and remain vigilant of poor visibility and the potential for ponding of water on roadways when driving.

Farther to the east, a double batch of rain is likely to be more distinctive as one storm system moves away and another forms, strengthens and gains momentum. 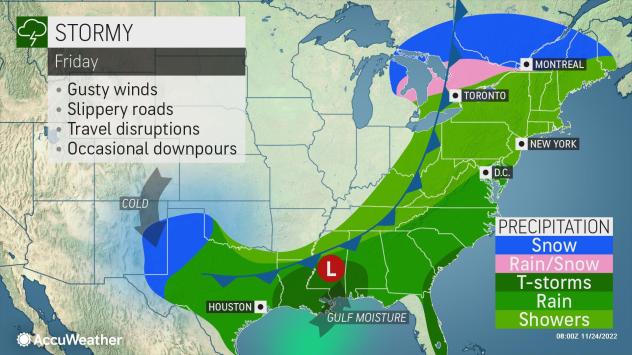 For example, around Atlanta, the first primary dose of soaking rain is in the forecast from later Thursday night to Friday midday.

"But, a big round of precipitation will follow from later Saturday to Saturday night in Atlanta and much of the busy I-85 corridor, and that is likely to lead to travel delays," AccuWeather Chief On-Air Meteorologist Bernie Rayno said.

AccuWeather forecasters say people headed out for shopping on Small Business Saturday should be aware of another hazard. Thunder and lightning can accompany the rain in the Southeast Saturday. There may be some locally heavy and gusty storms that erupt as well. AccuWeather meteorologists will continue to monitor the situation for any severe weather threats.

For those spending their extended Thanksgiving weekend at the theme parks in central Florida, both Friday and Saturday will feature highs in the 80s. Thunderstorms are expected Friday across Florida, while Saturday will have occasional showers. 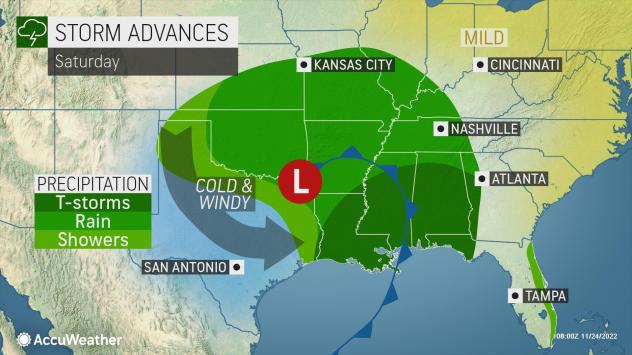 Multiple rainstorms in recent weeks from near the Gulf Coast to the Ohio Valley have allowed water levels to rise along the Mississippi River periodically. Even though the bulk of the rain from the upcoming storm will focus on the Delta region, it should provide another brief boost in water levels on the waterway and may allow barge traffic to progress for a time.

A wedge of cool air should be enough to keep a lid on widespread severe thunderstorms with this system through Friday.

"Still, some robust thunderstorms can get going along the northwestern Gulf coast on Thanksgiving Day and over the north-central Gulf coast on Friday," AccuWeather Senior Meteorologist Adam Douty said. "Some of these storms can be rather heavy and gusty."

At this time AccuWeather forecasters are emphasizing the torrential downpour risk in the area but remained concerned about more intense storms near the Gulf.

However, the storm may strengthen enough Saturday to bring some last-minute severe weather in portions of the Carolinas and Georgia. This risk may extend well inland from coastal areas and could focus on the southern Appalachians and Piedmont.

The storm will have a cold side to it, and that could bring the risk of some winter weather impacts for some.

As the storm strengthens, just enough cold air will be drawn in on its northwestern flank to produce a patch of heavy, accumulating snow in the Texas Panhandle and eastern New Mexico from later Thanksgiving Day to Friday night and perhaps early Saturday. 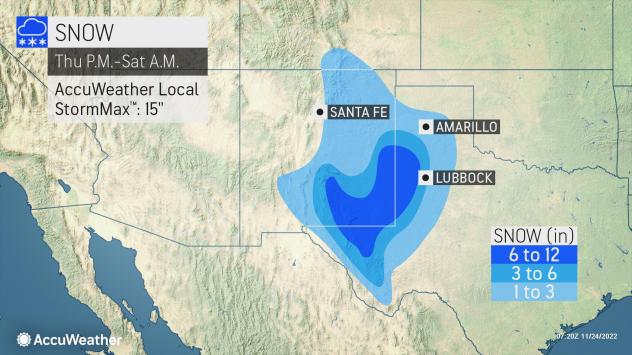 A general 6-12 inches of snow with an AccuWeather Local StormMax™ of 15 inches will blanket western Texas and eastern New Mexico. It is possible that the heaviest snow may end up falling west of Amarillo, Texas. Motorists planning on traveling along interstates 10, 20 and 40 in this area should expect delays and slippery conditions.

Despite the snow for the southern High Plains, a massive sweep of cold air is not expected to follow the storm across the South Central and Southeastern states, unlike last week.

Instead, the jet stream will extend from west to east across the nation later this weekend to the start of next week. This configuration generally allows average to slightly above-average temperatures. Highs Sunday and Monday will generally range from the 60s in the I-20 corridor to the 70s along the upper Gulf coast. 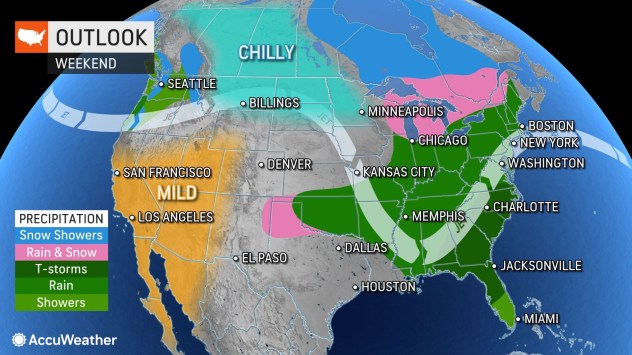 As rain shifts across the Midwest and Northeast, travel conditions will significantly improve Saturday over the South Central region and Sunday afternoon in the Southeast. Any rain and fog, which could cause travel delays, Sunday morning from Florida to the coastal Carolinas should depart later in the day.