Over 54 million Americans will be traveling for Thanksgiving this year, and stormy weather could cause chaos for last-minute travelers in one part of the nation. 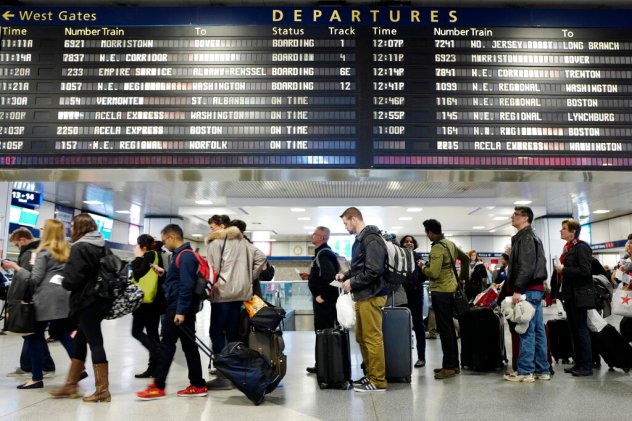 Passengers stand beneath an electronic signboard in New York's Penn Station as they wait to board a train, Sunday, Nov. 27, 2016. (AP Photo/Mark Lennihan)

More than 54 million people are predicted to travel for Thanksgiving this year, making it the busiest holiday travel period in November since before the coronavirus pandemic, according to AAA. As millions take to the road and the skies, AccuWeather meteorologists say that far-reaching weather could contribute to travel-induced headaches across the United States.

The Wednesday before Thanksgiving has been identified as the busiest travel day around the late-November holiday, but there has been a noticeable shift in recent years.

"Tuesday appears to be overtaking Wednesday as the busiest," AAA explained on its website. The company added that folks who are looking to save some money should think about booking flights on the Monday before Thanksgiving or Thanksgiving Day itself as airfare is typically cheaper on these days. There is also less congestion on the highways these days.

People who have flexibility when it comes to travel plans, including those who are able to work remotely rather than in the office, cannot only save time and money by traveling before Tuesday, Nov. 22, but they could also avoid weather-related delays. 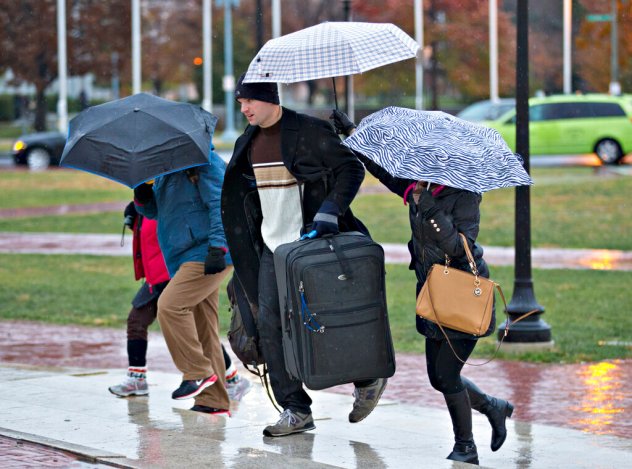 Holiday travelers scurry to Union Station as a wet and blustery storm along the East Coast made driving hazardous and tangled up hundreds of flights, in Washington, Wednesday, Nov. 27, 2013. (AP Photo/J. Scott Applewhite)

The biggest trouble spot in terms of weather on Wednesday, Nov. 23 will be the western U.S., according to AccuWeather's team of long-range forecasters, and will include cities such as Seattle, Salt Lake City and Denver.

"We are expecting big travel disruptions from wet, windy and snowy weather in the Northwest and Northern California," AccuWeather Senior Meteorologist Paul Pastelok said. "This intense weather will extend east into the northern Rockies." 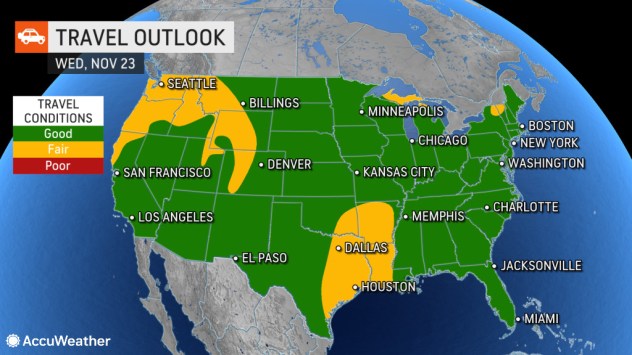 Mountain passes could be closed due to heavy snow, including Donner Pass in California. This will force travelers on Interstate 80 to change their routes in order to reach their destinations before Thanksgiving dinner.

Farther east, chilly but dry weather is in the forecast for most of Wednesday, including in New York City, Boston, Chicago and Atlanta. However, not all of the eastern U.S. will have tranquil weather conditions. 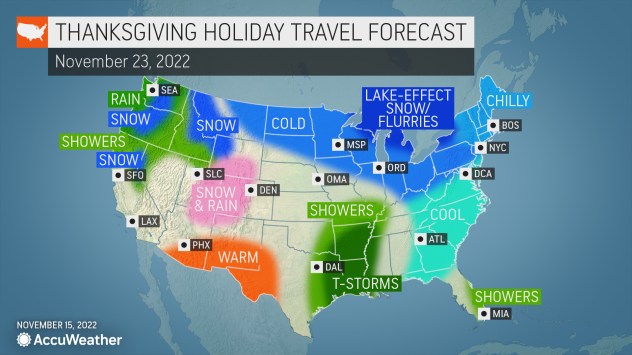 A cold front that is expected to clash with warm, moist air from the Gulf of Mexico will spark rain and thunderstorms over part of the southern Plains and Mississippi Valley. While this rain is much needed for the parched Mississippi River, it could lead to delays for motorists as well as air travelers. Water levels on the Mississippi River neared historic lows in late October, revealing Civil War-era relics and even human remains.

Flight delays and cancellations due to the weather could have an accordion effect across the country, potentially disrupting flights to or from cities where conditions are dry and calm.

GET THE FREE ACCUWEATHER APP
•Have the app? Unlock AccuWeather Alerts™ with Premium+

Last-minute travelers as well as those heading to Turkey trots, parades and football games could all face poor weather on Thanksgiving Day as multiple storm systems spread rain and snow across large swaths of the U.S.

AccuWeather has warned about the possibility of a big storm in the eastern U.S. on Thanksgiving since mid-October, and that forecast is predicted to play out with rain and thunderstorms stretching from the Gulf Coast to the Great Lakes next week. Snow showers and flurries are also possible on the northern edge of the storm.

Widespread rain and snow are also forecast for the Pacific Northwest, the northern Rockies and Northern and Central California.

The weather will not be a factor for the NFL games being played Thursday because all three games will take place in stadiums that have a roof, although pre-game tailgaters in Detroit and Dallas may have to endure periods of unsettled weather that could dampen festivities. 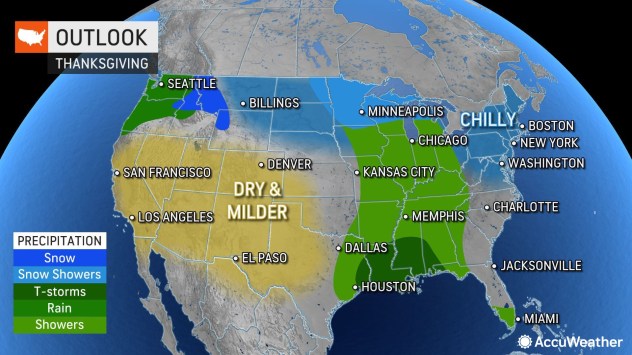 Stormy weather could linger over much of the eastern U.S. into Black Friday, which can dampen the holiday spirits of bargain-hunting shoppers as well as people traveling immediately following Thanksgiving.

Elsewhere, dry conditions are likely across most of the central and western U.S., although another storm could approach the Pacific Northwest with another round of rain and mountain snow, meteorologists say.

Rivers are drying up, but it's not too late to help.