Thanksgiving weather has a notorious history, and perhaps no example is more notorious than what happened over 70 years ago when National Guard members were summoned to shovel out city streets. 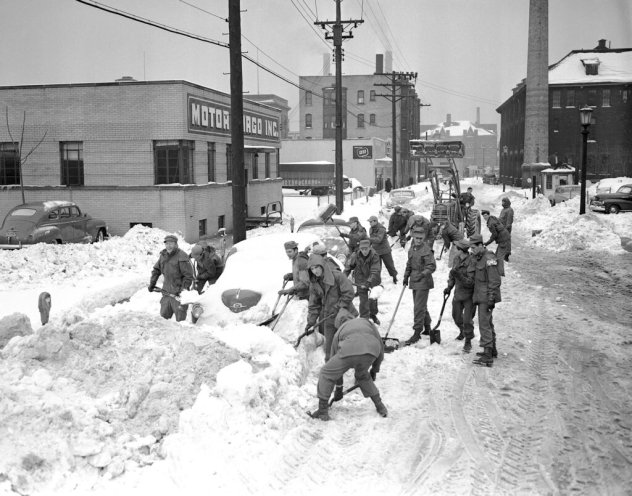 Members of the Ohio National Guard use shovels to help free snowbound streets of Cleveland, Ohio, on Nov. 28, 1950 during the Great Appalachian Storm. (AP Photo)

Cars and trucks stuck in a deluge of snow in California. A paralyzing ice storm in New England. A cluster of deadly tornadoes in the South. All were exacted by Mother Nature’s full force on or around Thanksgiving Day.

Dating back to when the first settlers arrived on the shores of present-day Massachusetts, the weather on the last Thursday of November has proven rather relentless in the Northern regions of the world. Through the years, we've tried to brave the elements while venturing outdoors -- whether to get a jump on December holiday shopping or a jump on some sledding or skating.

But oftentimes the weather has other plans. More than just below-freezing temps and occasional snow showers. Thanksgiving week is also capable of churning out more dangerous weather – from destructive ice storms to tornadoes and even bomb cyclones.

Here’s a look at some notorious Thanksgiving weather extremes throughout history:

A storm claimed the lives of 200 people in 1898 after forming off Cape Cod and walloping the New England coast. Many people were killed at sea as more than 140 ships were lost in the storm.

The storm lasted more than 30 hours and packed coastal wind gusts of 100 mph. Boston Harbor was filled with shipwrecks when the storm was over. The storm also brought southeastern New England to a standstill with wintry weather. More than 2 feet of snow buried parts of Connecticut, and Boston picked up more than a foot of snow.

The storm was named after the deadliest shipwreck, that of The Portland steamship which capsized off Orleans on Nov. 26, 1898, killing nearly 200 passengers and crew members.

One of the nation's worst ice storms in history pummeled New England in the days after Thanksgiving in 1921. More than 3 inches of ice piled up and roughly 100,000 trees were uprooted or ruined. 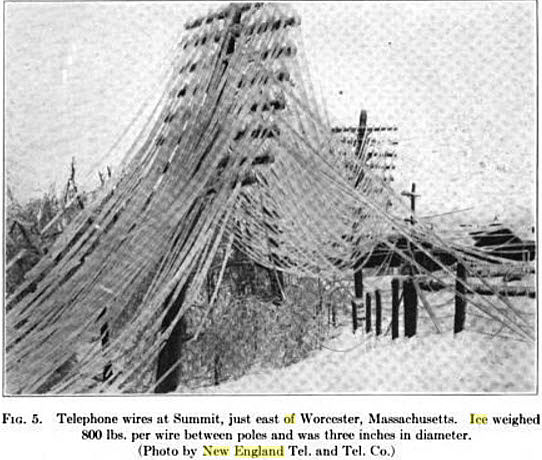 For more than three days, New England remained immobilized. The disastrous ice storm caused at least $10 million in damage. Adjusted for inflation, this storm would've caused more than $132 million in economic damage in 2021.

A Thanksgiving Day swarm of tornadoes touched down, leaving a total of 64 dead in Arkansas. Fifty-three people died in Portland, Arkansas, and 11 died in Morehouse Parish, Louisiana. A total of 58 people were injured. The tornado outbreak caused $630,000 in damages. That cost would be the equivalent of more than $9 million in 2021.

Persistent winds averaged 40.5 mph -- tropical storm force -- for over a 24-hour period in Boston during a fierce storm in 1945.

Eventually, rain changed to snow and 16 inches accumulated in parts of New England. Thirty-three deaths were blamed on the storm.

A nor'easter, which is a storm that forms along the East Coast, is named after the northeasterly winds that blow in from the ocean ahead of the storm.

Members of the Ohio National Guard use shovels to help free snowbound streets of Cleveland, Ohio, on Nov. 28, 1950. The Thanksgiving weekend storm caused one of the worst traffic jams in Cleveland's history. (AP Photo)

A large and intense cyclone brought larges swathes of the eastern United States to a standstill around the Thanksgiving holiday in 1950. The weather system initially formed in southeastern North Carolina on the morning of Nov. 24 and dissipated over Canada by Nov. 30. 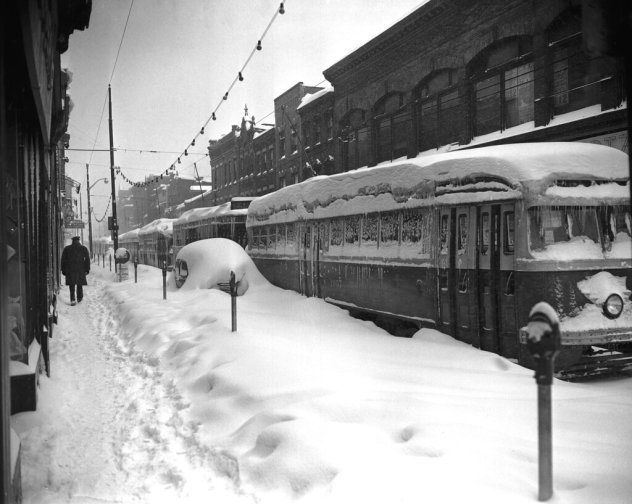 Fifteen street cars are stalled along Carson Street in Pittsburgh, Pennsylvania on Nov. 26, 1950, due to the Great Appalachian snowstorm. Trolleys were out of service for days. Operators gathered in one of the cars to play cards for a time but finally gave up and walked home. (AP Photo)

Snowfall was measured in feet in the hardest-hit areas. A snow total of 57 inches was measured in West Virginia. Nearly the entire state of Ohio was blanketed by at least 10 inches of snow, and the highest report in the Buckeye State was 44 inches.

This cyclone rapidly strengthened as it moved up the eastern side of the Appalachians. The powerful storm stirred fierce winds as it intensified. New Hampshire recorded an astounding wind gust of 160 mph at Mount Washington. Coastal flooding occurred from New Jersey on northward up the Eastern Seaboard as stiff onshore winds howled. 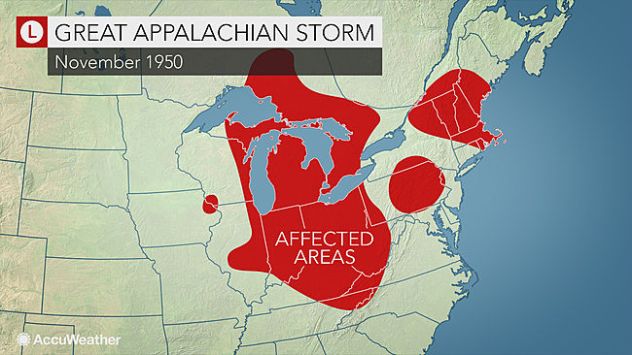 A coastal storm that unleashed more than an inch of rain and peak wind gusts of 63 mph in New York City unloaded more than 2 feet of snow in parts of northeastern Pennsylvania.

Snowfall began the night before Thanksgiving. By about noon on Thanksgiving Day, more than 2 feet of snow was reported on the ground in northeast portions of the Keystone State. Some of the surrounding areas saw upwards of 30 inches.

"Roads weren't plowed until the next afternoon. Everyone had to get around on snowmobiles," AccuWeather Meteorologist Dave Dombek said.

This was an extremely wet, heavy snow, as temperatures through much of the storm never dropped below 31 degrees Fahrenheit. The snowfall caused barn roofs to collapse, broke tree branches and downed power lines.

"The most amazing thing about that storm was that most of the snow fell within 12 hours. There were times when it was snowing at the rate of 2 to 3 inches per hour," Dombek said.

Hurricane Iwa struck the western Hawaiian Islands with peak winds of 86 mph with gusts of 105 mph. The hurricane, which passed within 25 miles of the island of Kauai, was the first significant hurricane to hit the Hawaiian islands since it became a state in 1959. 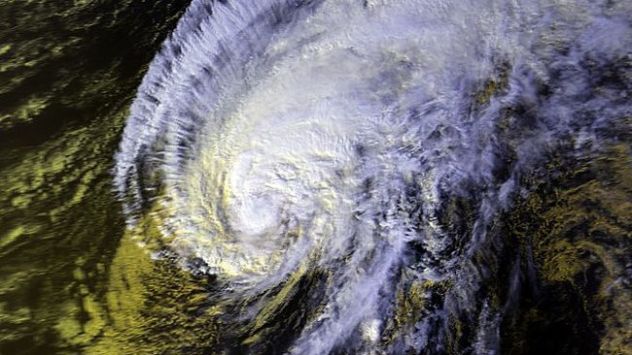 Although hurricanes rarely make landfall over Hawaii, the islands have still faced heavy damage from several glancing blows, including from Iwa. The storm left behind major damage on the island of Kauai, and a total of four deaths were reported -- one direct death and three indirect deaths. The peak storm surge was 6 to 8 feet on the south shore of Kauai.

The hurricane caused an estimated $234 million in damage, according to the National Weather Service. That would be equivalent to more than $639 million in 2021 dollars.

An F4 tornado tracked 83 miles across North Carolina during the days following the Thanksgiving holiday of 1988. Warnings were issued as the storm began blasting a path through suburban north Raleigh.

The tornado killed four people, including two children in Raleigh, and injured more than 157 people. Nearly 2,500 homes and over 75 businesses, including entire shopping centers, were demolished.

The tornado was spawned as a cluster of thunderstorms developed just before midnight on Nov. 27. This cluster of severe storms rapidly intensified as it moved across the state.

The trail of wreckage impacted thousands of lives across six North Carolina counties during Thanksgiving week.

One of the largest tornado outbreaks in U.S. history during November occurred from Nov. 21-22 in 1992 over the days leading up to Thanksgiving. Weather conditions came together to ignite an explosive round of severe weather, which spawned 93 tornadoes across the Gulf Coast states.

Several of the tornadoes were rated F3. The string of tornadoes caused a total of 25 fatalities in Mississippi. 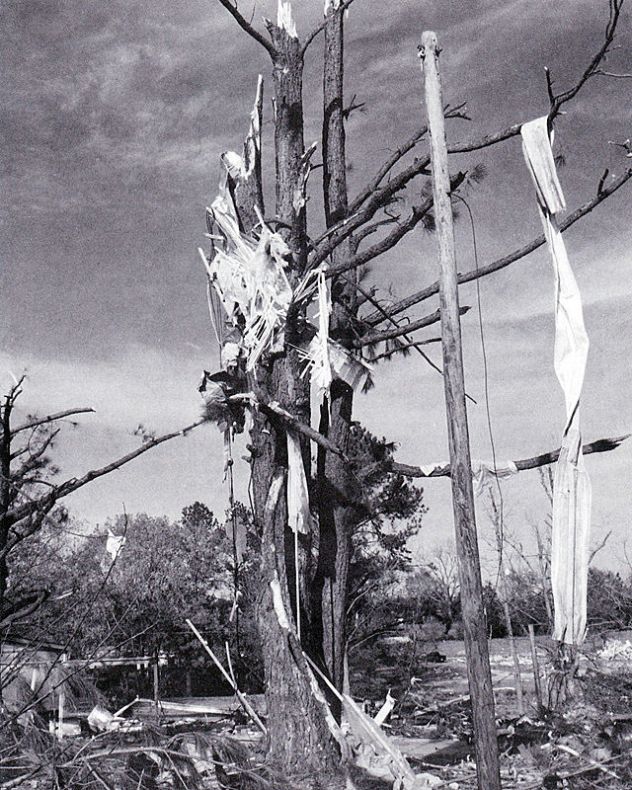 Mississippi, Louisiana and Alabama were rocked by tornadoes around the holiday in 2010. The night of Nov. 29 into the next morning, severe thunderstorms spawned 24 tornadoes across the lower Mississippi River Valley, 13 of which struck Mississippi.

Fifteen people were injured in Starkville, Mississippi, and hundreds of mobile homes were destroyed. Winds topping speeds of 90 mph were recorded near Aberdeen, Mississippi.

The Tuesday before Thanksgiving, a storm system approached the West Coast, coming ashore over southern Oregon and Northern California. By Wednesday, the storm system intensified into a bomb cyclone, even striking Seattle with winds approaching hurricane force -- or 74 mph. The cyclone would not only cause travel problems, but it would also set the tone for the remainder of the week as it stretched into Southern California.

Thanksgiving Day brought a deluge of rainfall to Southern California, with rain rates reaching 0.2 to 0.4 of an inch in areas like Ventura and Los Angeles counties. Los Angeles typically receives around an inch of rain through all of November. The storm wreaked havoc on Thanksgiving Day travel, inundating roads and slowing traffic. Waters rose near San Diego, submerging roads in at least 2 feet of water in some areas. 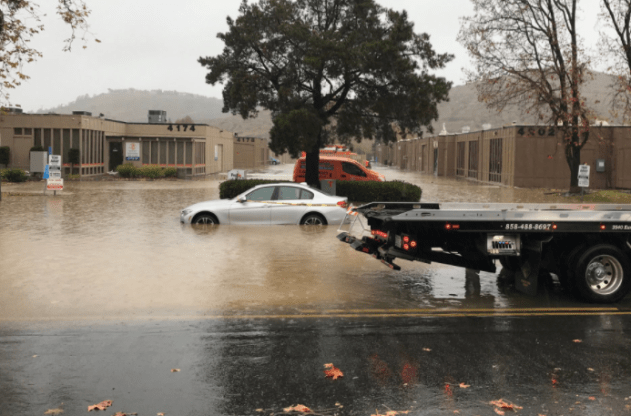 A car stalls in the floodwaters in San Diego, California, on Thanksgiving Day, Nov. 28, 2019. (Twitter/@SDFD)

In the mountains, the rain turned to snow at elevations of roughly 3,000 feet, shutting down roads and highways. The Mt. Baldy Fire Department reported 10 inches of snow at the altitude of 5,000 feet on Mt. Baldy. The storm moved into Nevada and Arizona, where it would swell rivers and continue flooding roads as families tried to return from Thanksgiving gatherings. 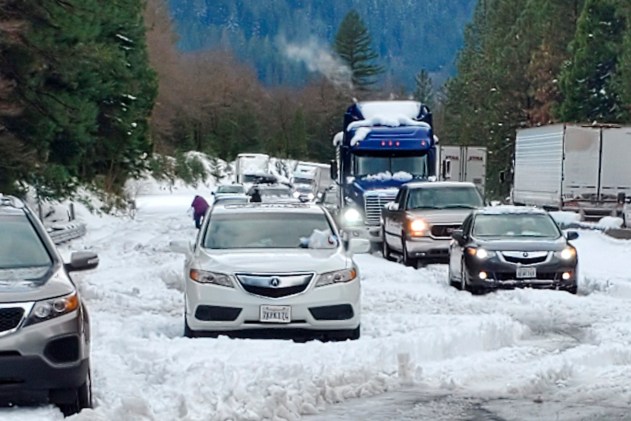 Cars and trucks in stopped traffic on Interstate 5 near Dunsmuir, California, on Nov. 27, 2019. Thanksgiving travel was snarled in some places by two powerful storms. A winter storm blamed for one death and hundreds of canceled flights in the West moved into the Midwest and dropped close to a foot of snow in parts of Minnesota and Wisconsin. (Caltrans via AP)

For one family, the holiday would end in tragedy. Nine members of an Arizona family attempted to cross Tonto Creek, which had been swollen by runoff from the storm that hit the area on Thanksgiving. Their military-style truck -- occupied by two adults and seven children -- was swept up by the torrent on Friday afternoon, according to the Gila County Sheriff's Office. Both of the adults and four of the children managed to escape the vehicle, but the other three were declared missing, and their bodies were later recovered.

While historically the coldest Thanksgivings over the past 150 years or so have occurred during the mid-1800s to near the turn of the 20th century, several cities in the Northeast -- from New York City to Washington, D.C. -- saw near record-breaking frigid temperatures on Thanksgiving Day of 2018. 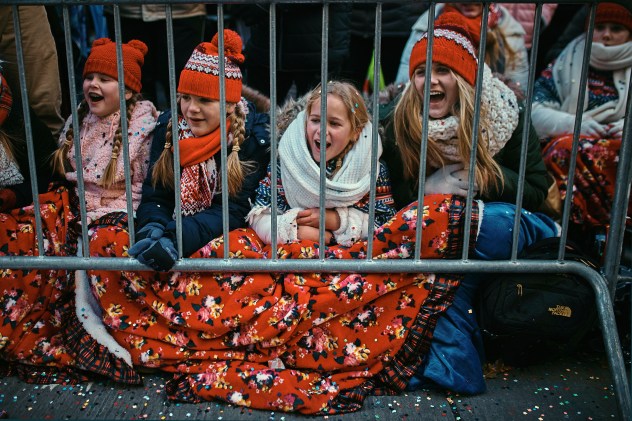 Girls shout as they watch the balloons moving along Sixth Avenue during the Macy's Thanksgiving Day Parade in New York on Nov. 22, 2018. (AP Photo/Andres Kudacki)