Think it’s cold now? AccuWeather forecasters have the scoop on what to expect this winter

Snow and sub-freezing temperatures have returned to the eastern two-thirds of the United States, a chilly reminder that meteorological winter is right around the corner.

Millions of people from the Plains to the Appalachians are experiencing a true taste of winter weather this week with subfreezing temperatures and accumulating snow settling into much of the eastern two-thirds of the United States. Frosty weather is even dipping southward into the Southeast, including cities like Atlanta. The cold and snow are not here to stay just yet, but the chilly air may serve as a reminder that meteorological winter, which starts on Dec. 1, is fast approaching.

Residents in part of the Midwest woke up Tuesday to see Halloween decorations covered in snow, with as much as 18 inches of powder piling up in the Upper Peninsula of Michigan. Chicago also experienced its earliest observed snowfall in eight years, an early start on the 35-40 inches of snow that AccuWeather is predicting for the Windy City this snow season.

Temperatures are predicted to rebound by the weekend and into the final week of October across the central and eastern U.S., providing some relief for warm-weather lovers ahead of November. However, how long will that trend last, and is the early winter preview a sign of what's to come?

"The pattern may set up where we could get a couple of cold shots in November," AccuWeather Senior Meteorologist and long-range forecaster Paul Pastelok said. He added that the chance for storms will accompany the waves of cold air, potentially even around Thanksgiving. That will not be an indicator of how the entire season will play out, Pastelok explained.

The frequency of snow will be lower than normal in general across much of the Northeast during the winter of 2022-2023, translating to fewer snow days for schools, less of a workload for snowblowers and plow services and a lower need for rock salt and other winter weather products.

Overall snow totals will also be down compared to normal for much of the region. For instance, Washington, D.C., is predicted to receive between 6 and 10 inches of snow this winter, below the average of 13.7 inches and lower than the 13.2 inches that fell last winter.

"It may be just too mild at the middle part of the season to get a lot of frequent [snow] events," Pastelok said. 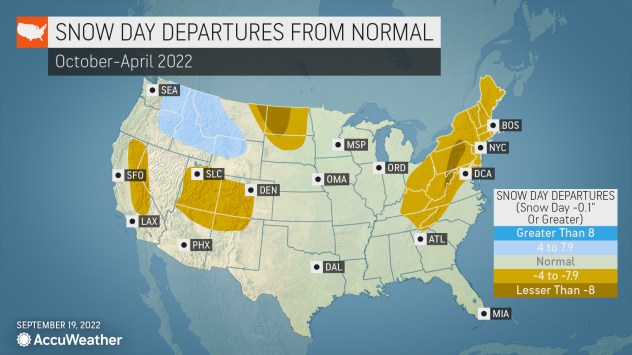 There will still be the chance for some bigger snowstorms, such as nor'easters, especially during the second half of winter. Despite the number of days with accumulating snow being lower than average, several big, late-winter storms could lead to near- to above-normal snowfall for the season as a whole for most of New England. This includes Boston, which is predicted to receive between 40 and 50 inches of snow, right on par with an average winter.

Even though snowfall throughout the winter is predicted to be lower than normal from the mid-Atlantic, Ohio Valley and into parts of the central Plains, it will not be a tranquil winter.

Storms delivering widespread rain and thunderstorms are in the offing from the Gulf Coast to the Great Lakes. Wintry precipitation will be possible across the Upper Midwest on the northern edge of the storms, resulting in a higher chance for snow in Minnesota, Wisconsin and the Upper Peninsula of Michigan.

Precipitation cannot come soon enough for businesses that rely on the Mississippi River as a crucial component of the supply chain. A prolonged stretch of drought and dry conditions across the Mississippi River watershed has caused water levels on the country's largest river to drop to historically low levels, slowing shipping and even causing larger boats such as cruise ships to suspend operations altogether.

The bigger story this winter for the central U.S. will not be the snow, but the temperature roller coaster. Winter as a whole is predicted to be warmer than normal across most of the central U.S., but it won't be quite like last winter. 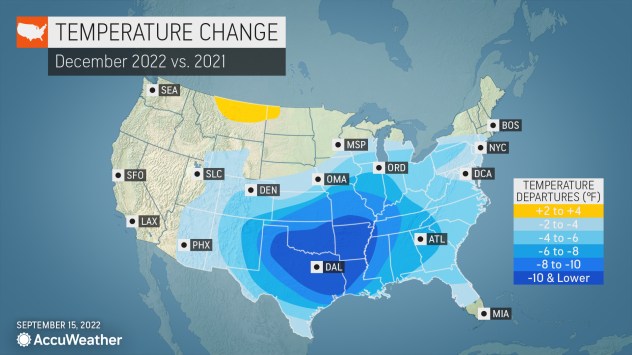 Temperatures this December are predicted to be 10 F lower than last December across this zone and much closer to normal, leading to higher heating demands around the holiday season compared to last year.

As the calendar flips from 2022 to 2023, AccuWeather meteorologists will be keeping a close eye on the polar vortex, as signs are pointing toward it unleashing a blast of bitter Arctic air later in the winter.

For a complete breakdown of the weather across the U.S., including snowfall forecasts for big cities in the Northeast, how La Niña will influence the seasonal weather pattern and a preview of the ski outlook, read AccuWeather's full winter forecast. 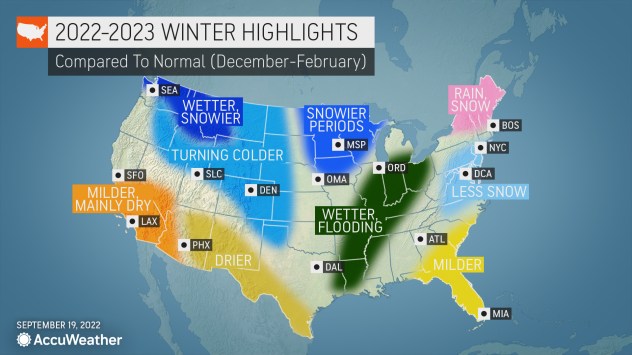 Billions of snow crabs have disappeared from the waters around Alaska