Dramatic video caught by a motorist showed a monster tornado tossing an ATV into the air like a toy on Wednesday. Meanwhile, places still reeling from hurricane strikes last year were hit hard by severe weather.

Storms with heavy winds and drenching rain crossed from the Plains into the Southeast on Oct. 27, bringing the threat of tornadoes with them.

Another severe weather outbreak erupted across the southern Plains and Gulf Coast Wednesday, killing at least one person and causing widespread damage, as a line of strong storms made its way across the United States.

Lake Charles, Louisiana, hasn't been dealt an easy hand from Mother Nature in quite some time, and another slew of twisters took aim at the beleaguered community on Wednesday. The outburst of severe weather drew October 2021 even closer to being a record October in terms of the number of tornadoes to touch down nationwide this month.

Tornado watches and warnings dotted the region throughout the afternoon, and the storms came to fruition in the form of at least eleven tornado reports and nearly two dozen high wind reports, according to the National Weather Service (NWS) Storm Prediction Center (SPC).

As the patch of severe weather moved east, Lake Charles was dealt the day's final reported tornado, a twister that ravaged the area around noontime. Dozens of homes were damaged as displaced roofs landed on front yards and scattered debris dotted driveways throughout the city.

At least two residents were injured by the intense winds, according to an SPC report; a woman was hurt after a window was blown into her home, and another resident suffered a leg injury caused by blowing debris, KATC reported.

Debris lays scattered across one homeowner's yard. Dozens of houses were damaged by the region's tornado outbreak. (LSM/Brett Adair)

It's been a long 14 months for the city since the area was smacked with back-to-back hurricanes from Hurricane Laura and Hurricane Delta last year. Although it was largely spared from any direct hits in the 2021 hurricane season, many displaced residents haven't returned, and many damaged homes are yet to be fully repaired.

After Wednesday's storms, those restoration timelines may have taken another hit.

“We just replaced basically the whole house,” local homeowner Kylie Flesch told WAFB. “We, literally, just finished up everything, I guess, technically yesterday from damage from Laura. So, here we go again.”

Late Wednesday night, the NWS Lake Charles office confirmed three different EF2 tornadoes had touched down, including the one in the Lake Charles area of Calcasieu Parish.

Fellow homeowner Brad Busse recounted his experience to WAFB, sharing that he took a quick glance outside to see the flying debris and his relocated trampoline.

“Just another disaster to go through, so keep throwing them at us,” he said. “We’ll take them and get through them.”

One state over in Mississippi, the National Weather Service along with Jackson County Emergency Management officials assessed damage from an EF1 tornado that tracked through Moss Point Wednesday night. Management Director Earl Etheridge confirmed Thursday that a woman had lost her life when the tornado reportedly forced her car off the road, flipping the vehicle and causing it to roll several times. Another EF1 tornado occurred farther west in Mississippi, traveling through Picayune and across Interstate 59.

This wild video shows a tornado tearing through Interstate 10 in Orange, Texas, on Oct. 27. Not only were power lines sparking, but an ATV was also spotted flying among the debris.

The other two confirmed EF2 twisters ripped through in Orange County, Texas, which is about 40 miles west of Lake Charles. Dramatic footage captured by a driver on Interstate 10 showed the ominous tornado slashing through the major roadway, ripping up guardrails and snapping powerlines as it went, illuminating the dreary sky with bright blue bursts.

In the midst of the footage's captured destruction, an ATV can even be spotted flying among the debris, tossed into the air like a toy.

Mary Phan, who filmed the incident while behind the wheel of her vehicle and shared it on Facebook, told Storyful she initially thought the debris was spewing from a fire. 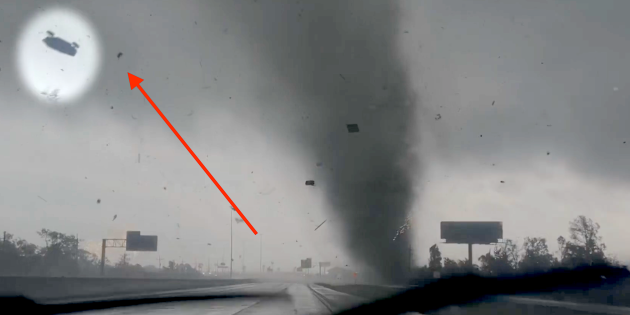 A monstrous tornado in Orange County, Texas, rips across an interstate, sending an ATV flying through the air and snapping powerlines. (Storyful)

"It was much closer to me than the video is showing," Phan said. "It was scary, and I thought about driving off the road to get away from it."

The devastation was severe enough in Orange County to warrant a disaster declaration from area officials, citing the "extensive and widespread damage to public and private property, disruption of utility service, and general endangerment of the health and safety of residents of Orange County."

Farther north, a possible twister in Newton County left "moderate" damage, according to local officials, while another possible tornado in the Houston area was responsible for damaging a home and downing trees.

On Thursday, the severe weather continued — this time in Florida. Two preliminary tornado reports were made in the state by 5 p.m., local time. A trained spotter reported a tornado moving to the Northeast from Kissimmee Prairie Preserve just before 5 p.m., the National Weather Service’s Storm Prediction Center reported. Severe winds also accounted for downed trees and snapped branches along the Golf Coast of the state.

Hundreds of flights were either delayed or canceled on Thursday as severe weather rumbled through Texas. The Dallas-Forth Worth International Airport canceled at least 376 flights and delayed another 991. The George Bush Intercontinental Airport in Houston delayed at least 437 flights.