Stormy pattern to bring risk of flooding in mid-Atlantic, Northeast

In the wake of ideal weather for Independence Day, flash flooding is expected to threaten part of the region from Tuesday to Friday, AccuWeather forecasters say.

Dry weather prevailed across the Northeast and mid-Atlantic at the end of the extended Independence Day weekend, but AccuWeather forecasters say that severe weather may threaten parts of the region following the holiday.

"As many people return to work after the long holiday weekend, the threat of showers and thunderstorms will also return to the Ohio Valley, Northeast and mid-Atlantic states into Tuesday night," said AccuWeather Meteorologist Brandon Buckingham.

An area of thunderstorms dove southeastward across portions of Indiana and Ohio Tuesday morning. Those storms weakened during midday, but despite the expected weakening, people should not be lulled into a false sense of security. 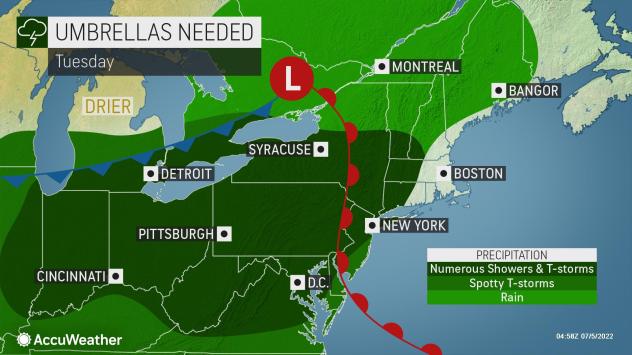 "The threat of thunderstorms may come in waves, with the potential for another round to arrive during the overnight hours," explained Buckingham.

The thunderstorms will erupt along the northern edge of a heat dome that is located over the central and southern Plains. This general setup is expected to persist for much of the week and will cause the risk of flooding to increase.

This will be especially true for any locations that receive multiple rounds of thunderstorms. However, meteorologists caution that even one thunderstorm can drop heavy rain in a short period of time and produce flash flooding. 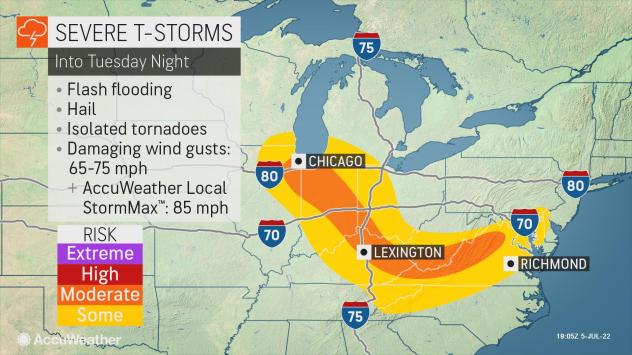 Besides flooding, the strongest storms can produce hail and damaging wind gusts. Although the risk is low, isolated tornadoes are not completely out of the question.

Columbus, Ohio; Lexington, Kentucky; Pittsburgh; and Charleston, West Virginia; are just a few locations under a moderate risk for severe weather, according to AccuWeather forecasters.

"There is a chance that the thunderstorm activity could be in a consolidated line or clusters, so trying to determine the exact locations of those potential complexes of thunderstorms can be difficult," said Buckingham.

While a severe threat will be present in the Ohio Valley and mid-Atlantic, it will not be a tranquil week in New England. An area of low pressure is expected to spread rain across much of New England and upstate New York Tuesday afternoon and Tuesday night. Severe weather at this time appears unlikely, but any embedded thunderstorms could produce locally heavy rain and disrupt outdoor plans.

Wednesday is forecast to be a drier day in New England and the northern mid-Atlantic as a cold front pushes south of the region, allowing slightly less humid air to arrive. That will not be the case farther to the south as the front will eventually stall. 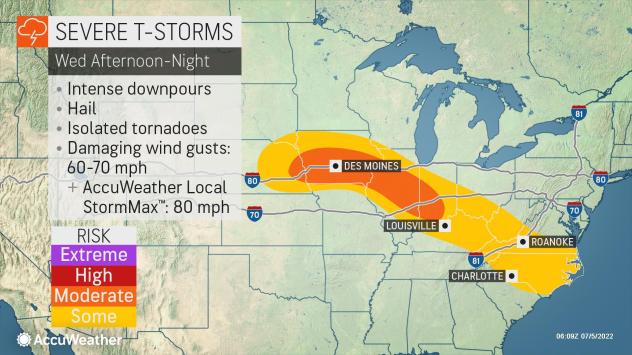 Although locations such as Baltimore and Washington, D.C., are likely to have thunderstorms on Wednesday, there will be a risk of severe weather in southern Virginia and North Carolina.

Roanoke, Virginia, and Raleigh and Charlotte, North Carolina, will have a risk of intense downpours that could result in flooding. Damaging wind gusts will also be possible with the strongest of the storms, forecasters say.

The zone of thunderstorms is forecast to be in a similar area on Thursday. As of now, the primary hazard on Thursday will be flooding. 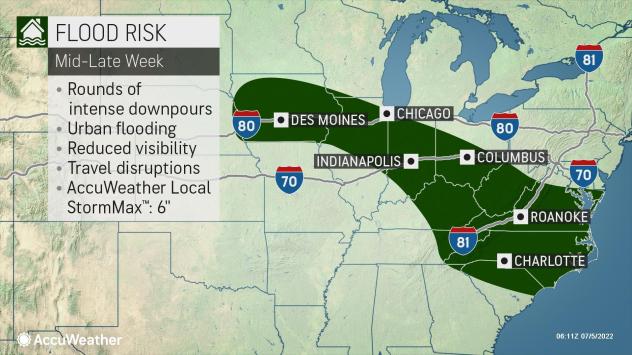 Ahead of another cold front, the area of rain and thunderstorms will grow on Friday. The heaviest rain should again be confined to Virginia and North Carolina, but more humid air will surge as far northward as southern New England. Thunderstorms almost anywhere from southern New England southward could receive heavy rain which could cause localized flooding.

High pressure is expected to build into the Northeast and mid-Atlantic by the weekend, leading to a dry Saturday and Sunday. In addition, the heat dome will weaken and shift farther west which will significantly reduce the risk of thunderstorm complexes. In fact, outside of the northern Plains and parts of the Southeast, much of the nation can look forward to a precipitation-free weekend.