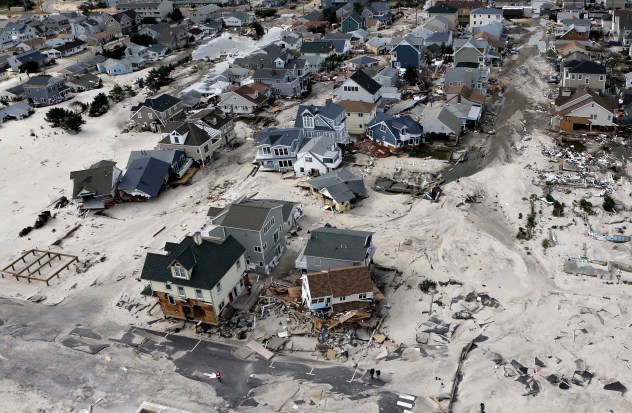 It's been six years since Sharon Zappia has been able to live in her Atlantic City, New Jersey, home.

Over that time, she's been paying to live in a rental home as repairs continue nearly a decade after Superstorm Sandy struck and upended her life along with the lives of many others up and down the New Jersey Coast. The mortgage for her house was one of many that were put on pause thanks to a state law that granted a period of mortgage forbearance, essentially a grace period that allowed homeowners to defer loan payments while they recovered from the storm.

That reprieve, however, came to an end on Friday, leaving those caught between paying for rent, repairs and now mortgage with a mix of uncertainty and despair.

"It's pretty disheartening to be there, rebuilding the home, knowing that I may wind up in foreclosure," Zappia, 66, told AccuWeather.

In 2017, New Jersey passed a law granting a period of mortgage forbearance for homeowners who still hadn't returned home after Superstorm Sandy up until July 1, 2019.

The law's expiration was later extended to July 1, 2022, with the amending legislation stating that "although the storm made landfall over six years ago, more than 1,000 families who qualified to receive federal recovery funding still have not been able to complete the rehabilitation of their homes, or move back in." It added that many of these families who had been unable to return to their homes continued to be responsible for both homeowner expenses as well as paying to live elsewhere.

The extension came at a time when the grassroots organization New Jersey Organizing Project had been fighting to advocate for more time for these homeowners. The project was founded shortly after Superstorm Sandy by survivors trying to return to some semblance of normalcy, from grappling with low flood insurance payouts to trying to find the resources to return home. Zappia and Ordille are both members of the organization.

However, not all lenders seemed to have a clear understanding of the law's terms.

The lender for Atlantic County teacher John Ordille's mortgage sent him two notices of foreclosure during the forbearance period, Ordille, 58, told AccuWeather. The first was a letter with a warning, and he had thought he had cleared it up after a phone call. The second was a package that gave him a 30-day notice of foreclosure, he said. That took a bit longer to sort out, but served as a preview of what homeowners in a similar situation could soon see.

When Superstorm Sandy struck on Oct. 29, 2012, it killed at least 147 people and caused widespread property damage in the Northeast. Photos of the destruction went viral, including imagery of the Jet Star Roller Coaster sitting in the ocean after the destruction of Funtown Pier in Seaside Heights, New Jersey. Other photos showed decimated neighborhoods and homes in various states of destruction. Those not collapsed or swept off their foundation weren't spared from flood damage. 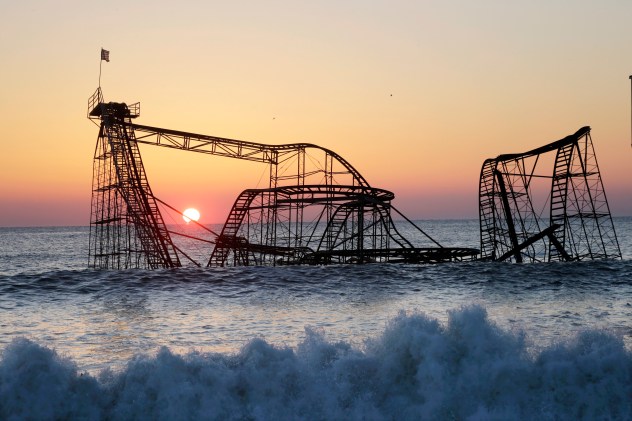 The sun rises in Seaside Heights, N.J., Monday, Feb. 25, 2013, behind the Jet Star Roller Coaster which had been sitting in the ocean after part of the Funtown Pier was destroyed during Superstorm Sandy. (AP Photo / Mel Evans)

Zappia's home had flooded only once before, she said, back in 1992 when about 2 inches of water invaded the 122-year-old house. She had been confident her home wouldn't flood again.

Then Superstorm Sandy flooded the old house with 30 inches of water, sending Zappia spiraling into a decade-long effort to rebuild her home of 36 years.

Currently, there's no sheetrock, no insulation, no kitchen. Zappia quickly learned that the house had originally been built crooked when contractors elevated it in 2015. While the house was straightened out, the process had left the door frames and windows twisted, locking them in place. The original wood floors are bellied and are in need of leveling.

"It was a very difficult experience," she said. "My husband had passed a short time before the storm, so I was without a paddle, so to speak, because he had always managed anything regarding homeowners' insurance, flood insurance, finances, all of it. So I was left in a pretty precarious situation." 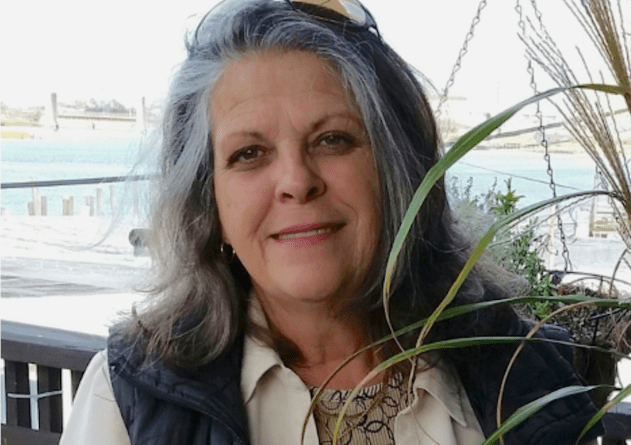 The rebuilding process for many was wrought with complications, largely surrounding wrestling with insurance claim decisions and navigating the bureaucracy surrounding obtaining funds from state programs.

To complicate rebuilding efforts further, the quotes from the damage observed didn't move with inflation, meaning the funds that were originally supposed to cover the cost for contractors now aren't enough to get the job done given the recent rise in the costs of goods and materials.

When adjusted for inflation, Superstorm Sandy was the fourth-costliest tropical cyclone in United States history at $80 billion, according to NOAA. Only hurricanes Katrina, Harvey and Maria rank higher than Sandy on the list.

"[Funds for rebuilding] came right to the dollar of my old contract, but not now," Ordille said. It's been seven years since he and his family have been home, despite his and his wife's efforts. But their case, he said, was "riddled with pitfalls." 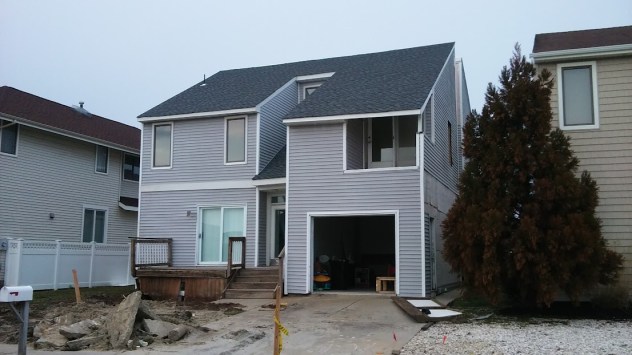 While the second floor of John Ordille's home was still livable following Superstorm Sandy, the first floor was badly damaged.

The court and insurance had decided Ordille's home wasn't a complete loss due to the second floor being habitable. So, Ordille explained to AccuWeather, he used the money from insurance and FEMA to try and fix the first floor.

After applying to the Reconstruction, Rehabilitation, Elevation and Mitigation (RREM) program, a representative told him an inspector would come around in a timespan of 90 days to give an estimate, he said. Eighteen months would pass before an inspector for the program arrived on site. The flood insurance adjuster never showed up and relied on photos instead of an in-person evaluation.

Ordille had originally hoped to receive additional funding for repairs from the RREM program, but instead, he said, RREM required him to first tear down the house. At the time, he had agreed it was for the best.

But now, Ordille said, a confluence of factors including the terms of a contract signed in 2017, inflation and high demand for services, are causing the usual subcontractors hired for things such as painting or adding moldings to go to "the highest bidder," adding even more complications to his recovery effort.

The new home, while smaller than the original, was also supposed to be wheelchair accessible for his son.

"This was all supposed to work," Ordille said. "This was supposed to be the best thing that happened once it was all done." 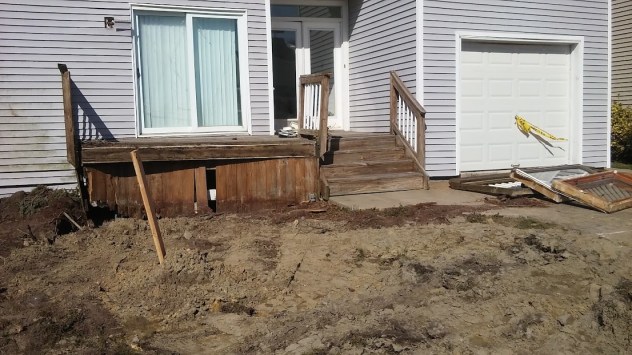 Damage to the front of John Ordille's home from Superstorm Sandy.

Zappia also received a grant from the RREM Program after applying in the spring of 2014 and signing her grant for initial funding a year later. She was approved for the maximum amount of $150,000, the ceiling set back when the program was started in 2013.

"I couldn't go out and get contractors and estimates and whatnot until I knew I had the funding," Zappia said. By the time contractors started lifting her home, 2016 was coming to a close, marking four years since the storm. It can cost upwards of a hundred thousand dollars to lift a home.

Having heard stories about people who had moved out thinking they'd be gone for only six months to be going on their second year away from their home, Zappia sold half of her household items. She wouldn't be able to afford a storage unit for two years, let alone the six years she's been out of her home as of 2022.

But for Ordille, six years of renting a storage unit plus COVID-19 impacting his income have long since added to the financial stress.

"I will make one or two payments, if possible. If not, we're going to be in some trouble," Ordille said.

"What I don't get is we're not just a number. I'm not just my RREM number. I'm a human being and I don't know how many years I have left," Zappia said. "I would like to have some stress relief sooner rather than later."