This year is being described as one of the worst growing seasons in the last decade for Texas farmers as the weather has kept temps well above the precise temperature for optimal corn growth.

One farmer along the Texas Coastal Bend says any rain from tropical activity in the Gulf of Mexico is too late for his struggling corn and cotton crop.

Generous rounds of spring rain helped farmers in Texas grow plentiful crops last year, but there is a shocking difference this year. As a worsening drought tightens its grip and heat waves send temperatures soaring, many farmers have been left with barren and dry fields.

After becoming a full-time farmer in Nueces County, Texas, which is just west of Corpus Christi in the 1980s, Scott Frazier told AccuWeather National Reporter Bill Wadell that this growing season is one of the worst he's seen in more than a decade. Fraizer grows corn, cotton and sorghum grain, which is primarily used to feed livestock, and he is worried the lack of rainfall along with the scorching temperatures will lead to a smaller-than-normal harvest this year.

"Since we planted, we've had virtually no moisture. I think this corn here maybe had an inch of rain about a month ago," Fraizer said. "That was the only moisture it got." 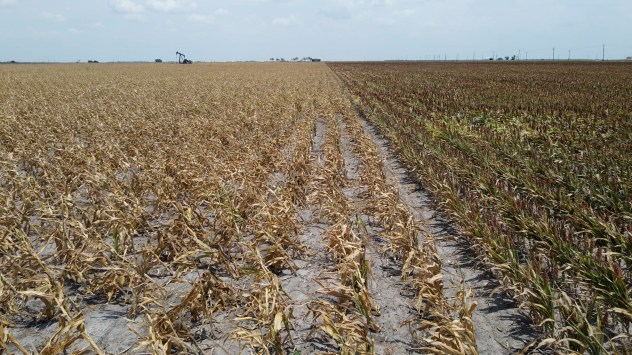 The nearest National Weather Service (NWS) reporting station, located in Robstown, Texas, has measured only 4.7 inches of rain this year, which is just over a third of the average rainfall this area measured by this time of the year.

According to the C.O.R.N. newsletter from The Ohio State University, corn growth is maximized at 86 degrees Fahrenheit. Once the temperature exceeds that threshold, the growth rate is reduced. Typically, fully gown corn crops tower over a person, reaching as tall as 8 feet in some cases, but due to triple-digit temperatures in Texas, many of the corn crops in Fraizer's fields have grown to heights of only 3-4 feet.

To illustrate that point, Wadell stood in the middle of one of Fraizer's cornfields. Not only were the cornstalks brown as though the season had ended, the tallest stalks barely made it up to Wadell's waist. He stands at more than 6 feet tall.

Even though the crops are much smaller this year, Fraizer is hopeful of getting a decent harvest still. 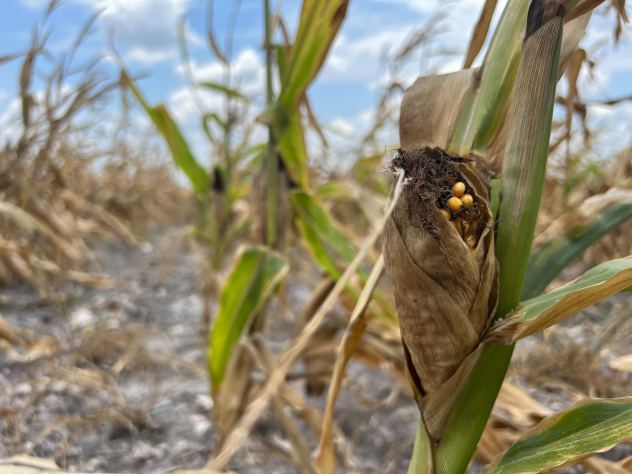 Another crop that has been struggling to survive in the brutal weather conditions is the cotton crop.

"There was a lot of cotton here early on in the season. We didn't have enough moisture to even get it up and growing," said Fraizer. "So you'll see some bare fields that it just never came up."

According to the U.S. Drought Monitor, most of Nueces County has been in a moderate drought, which is level two out of five on the scale, for the last three months. Only a tiny percentage of the county is experiencing an extreme drought.

Jamie Lopez, who works for Texas A&M AgriLife Nueces County Extension, told KRIS6, a local television station, that this year's harvest is not promising. According to Lopez, 60% of the corn grown in Nueces County is "very poor," while 60% of the cotton grown within the county is unusable. 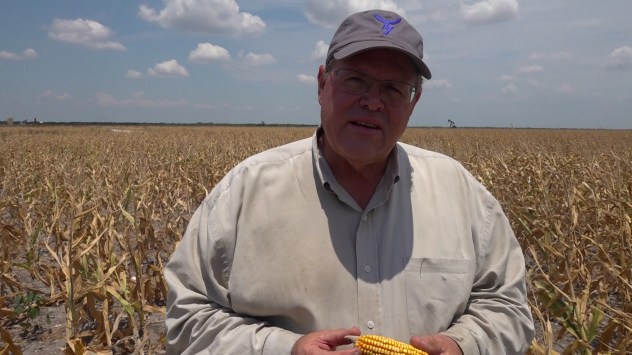 Scott Fraizer explains how the drought has affected his crops this year in Nueces County, Texas. (AccuWeather / Bill Wadell)

Even though there is a small window left before its time to harvest the corn, Fraizer said that the tropical rainstorm in the Gulf of Mexico that's expected to bring heavy rain to parts of the western and central Gulf Coast late this week could further damage the crops.

"It's too late to do any real good," said Fraizer. "Actually, you can almost get to the point where it's damaging some crops, making it harder to harvest."

Most farmers have crop insurance which will protect them from their poor growing seasons, Fraizer explained. 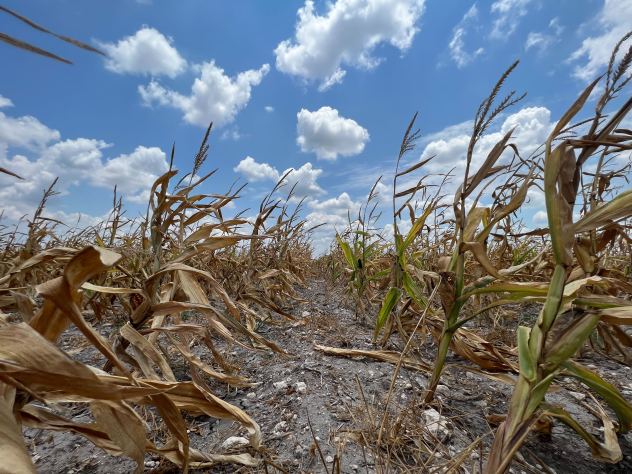 Amid drought and triple-digit temperatures in Nueces County, Texas, crops struggle to grow, yielding a much smaller harvest than normal. (AccuWeather / Bill Wadell)

"My crop insurance hasn't helped me yet, but after we go to harvest and see what we made and compare that to what our history is, then hopefully, our crop insurance will pick up some slack in there," Fraizer said.

Fraizer is fearful that this poor harvest will trickle down to consumers later in the year, especially if farmers get any more curveballs in the forecast. The corn and sorghum grain Fraizer and other local farms in Nueces County grow is mainly used as livestock feed. With a feed shortage, prices could increase and create shortages at many grocery stores.

"I really believe in the next few months, towards the end of the year, I wouldn't be surprised if we see a few food shortages or commodities," Fraizer said. "Everybody has to eat, needs to eat, it's certainly important to have producers out there growing crop, or we'll find out pretty fast if we're not working the rest of the country will know pretty quick."