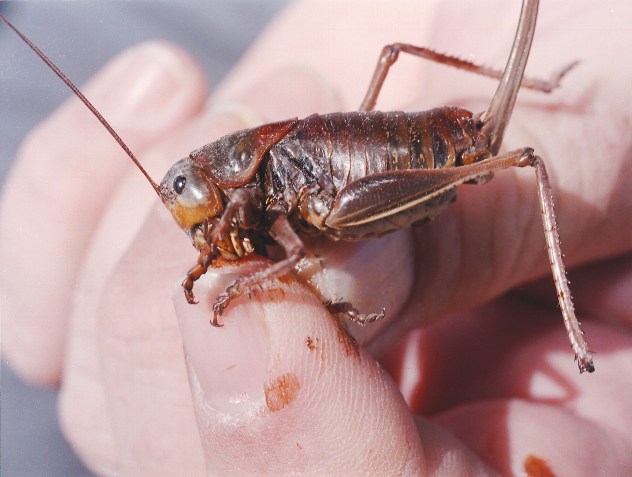 Jeff Knight, an entomologist with the Nevada Department of Agriculture, holds a female Mormon cricket north of Reno, Nevada, in this June 2003 file photo. Farmers in the U.S. West face a creepy scourge every eight years or so: Swarms of ravenous insects that can decimate crops and cause slippery, bug-slick car crashes as they march across highways and roads. The 2017 swarms are affecting Idaho, Oregon, and other Western states. (AP Photo/Debra Reid)

On top of a worsening drought and rising temperatures, farmers across the Western third of the United States are battling outbreaks of cannibalistic insects that are ravaging crops from Nevada to Montana. Officials have spent millions of dollars over the past few years trying to control the explosive swarms of Mormon crickets that are responsible for destroying swatches of crops from Nevada to Montana.

Native to North America, Mormon crickets got their name in the 1800s when these giant insects ruined the fields of Mormon settlers. These insects are not true crickets; they are actually shield-backed, short-winged katydids that resemble fat grasshoppers that cannot fly, according to the University of Nevada, Reno's College of Agriculture, Biotechnology and Natural Resources.

In recent years, outbreaks across the West have only worsened, and the climate crisis might be partially to blame. The insect, which can grow up to 2 inches in length, favors hot conditions and drought, The Associated Press reported.

"Although there are local and regional exceptions, in general, the Western U.S. drought has intensified since the beginning of 2020," AccuWeather Meteorologist Dave Houk said. "Most of central Oregon is currently in an extreme drought."

Drought conditions encourage Mormon cricket outbreaks, and according to the U.S. Department of Agriculture (USDA), these outbreaks can result in billions of insects, which cause major economic and ecological losses to rangeland and cropland.

Typically, these flightless insects travel together, covering at least a quarter of a mile per day, according to the University of Nevada. As they devour vegetation, countless crops are damaged, and natural patterns, like erosion, water runoff and nutrient cycling, are abruptly changed, the USDA said.

In an interview with the AP, Skye Krebs, a rancher in Oregon, explained the outbreaks as "truly biblical."

Oregon was one of the hardest-hit states last year. In 2021 alone, the AP reported that Mormon crickets and grasshoppers were responsible for destroying 10 million acres of rangeland in the Beaver State.

One of the largest Mormon cricket outbreaks since the 1940s occurred in 2017 in Arlington, Oregon. As squashed entrails of the insects littered the roads in Arlington, Krebs described roads as looking "greasy." 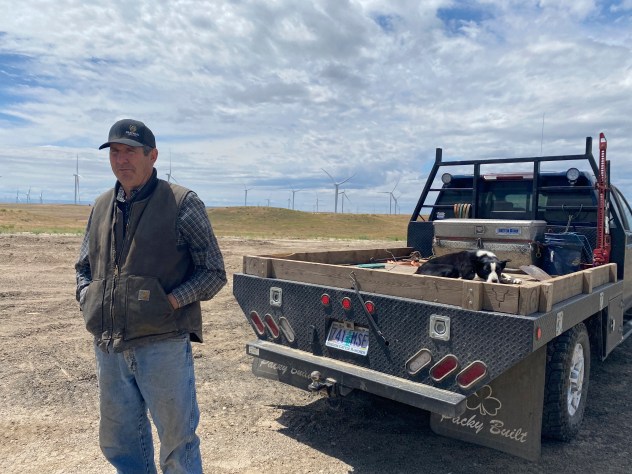 Skye Krebs looks out across his ranch near Arlington, Oregon, on June 17, 2022. Parts of his property were found to have surpassed "economic densities" for Mormon crickets by Oregon Department of Agriculture surveyors. (AP Photo/Claire Rush)

"On the highways, once you get them killed, then the rest of them come," Krebs said.

Mormon crickets are cannibalistic, and if they are not sufficiently satiated with protein, they will feast on each other, dead or alive, according to experts with the University of Nevada.

In response to the recent outbreaks, the Oregon Legislature set up a Mormon cricket and grasshopper suppression program, allocating $6.2 million to assess the problem, The Science Times reported.

Under a new initiative in the state, private landowners like ranchers or farmers can request the Oregon Department of Agriculture (ODA) to survey their land for Mormon crickets and grasshoppers. The ODA will recommend chemical treatment, such as a pesticide, if their survey finds more than three Mormon crickets or eight grasshoppers in a square yard, but they do not have the authority to conduct suppression treatments without the written request of the landowner, according to the USDA.

In 2021, during the outbreak in Arlington, the AP reported some areas surveyed in the town were found to have more than 201 Mormon crickets per square foot. 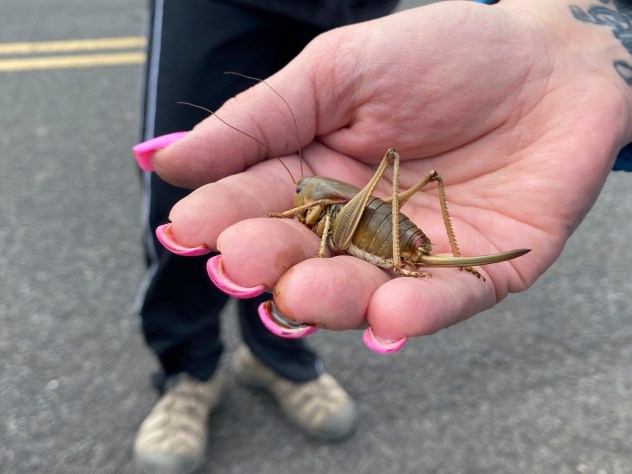 April Aamodt holds a Mormon cricket in her hand in Blalock Canyon near Arlington, Oregon, on June 17, 2022. (AP Photo/Claire Rush)

The ODA recommended Diana Fillmore treat her 988-acre ranch in southeastern Oregon after she found the ground covered with the crawling insects. Fillmore spent $45,000 on hay after the ranch was completely ruined during the outbreak last year.

This program from the ODA is only for private landowners. Public land owned by the federal government is covered by the U.S. Department of Agriculture, which has its own program for dealing with outbreaks. Since the 1980s, the USDA's Animal and Plant Health Inspection Services (APHIS) has sprayed millions of acres with pesticides to control the Mormon cricket and grasshopper populations across the Western third of the country.

Astronomy As it grew, Jupiter might have eaten a few planets, study finds