Experts noticed something odd when looking at the chemical makeup of Jupiter.

Jupiter, the solar system's biggest planet, might owe some of its gargantuan size to the fact that it cannibalized other planets in order to help it grow, according to a new study.

The massive gas giant's swirling storms and cloudy outer atmosphere have long-hindered researchers' abilities to glean information about the composition of the planet, but new data collected from NASA's Juno probe has allowed scientists to look into what makes up the surface of the planet, according to Live Science.

"Juno provided very accurate gravity data that helped us to constrain the distribution of the material in Jupiter's interior," lead researcher Yamila Miguel, an astrophysicist at Leiden University in The Netherlands, told Live Science. "It is very unique data that we can only get with a spacecraft orbiting around the planet." 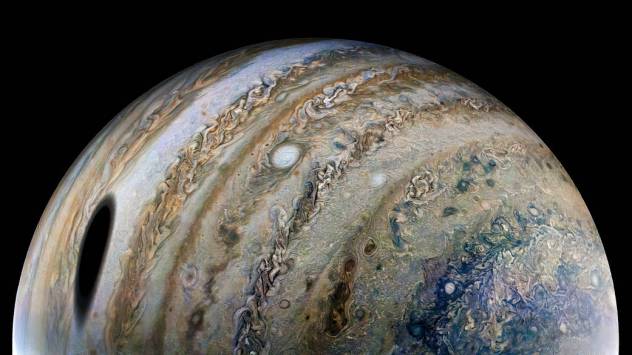 NASA’s Juno spacecraft captured this view of Jupiter during the mission’s 40th close pass by the giant planet on Feb. 25, 2022. The large, dark shadow on the left side of the image was cast by Jupiter’s moon Ganymede. (NASA/JPL-Caltech/SwRI/MSSS)

A team of scientists used gravitational data collected by Juno to examine the solid material at the massive planet's core, finding that its chemical make-up strongly suggests that Jupiter ingested baby planets, scientifically known as planetesimals, to sustain its rapid growth.

Jupiter's formation began when the cosmic material that would eventually become the planet started to accrete rocky material. There are dueling theories about how this happened, with one theory suggesting that billions of small space rocks came together to form the core. However, this new study suggests that the initial core grew larger and larger when it gobbled up several planetesimals, mile-long space rocks which themselves could have formed Earth-sized planets.

"Because we cannot directly observe how Jupiter was formed we have to put the pieces together with the information we have today," Miguel said. "And this is not an easy task."

Once the planet became so massive, its gravitational pull became strong enough to siphon gasses like hydrogen and helium to form its cloudy atmosphere.

The finding that Jupiter is likely made up of baby planets may cause scientists to reexamine the formation of Saturn, Uranus and Neptune, the solar systems' other gas giants.

"Jupiter was the most influential planet in the formation of the solar system," Miguel said, adding that its massive gravitational pull shaped the development of its otherworldly neighbors. If Jupiter formed by eating infant planets, it is possible that Saturn, Uranus and Neptune formed in a similar manner.