The Perseverance Rover was on its way to a "bacon strip" on Mars when it spotted something that seemed out of place amid the rocky terrain on the Red Planet.

It’s only a crater, but it looks like an eyeball.

NASA's Perseverance Rover has been driving around the surface of Mars since landing on the planet on Feb. 18, 2021, and the latest geological wonder explored by the robotic pioneer is exciting for geologists and could cause cravings for breakfast food.

On Thursday, June 16, NASA said that the rover was driving over "the bacon strip," a nickname for a region that had piqued the interest of scientists.

The location was not inspired by the discovery of pigs on Mars, but rather the way the area resembles a strip of bacon when viewed from space. 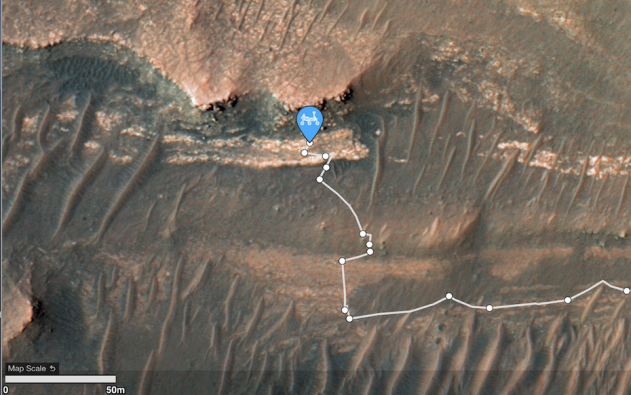 The path that the Perseverance Rover has driven superimposed on a satellite image of the surface of Mars. In early June, the rover reached an area nicknamed the "bacon strip." (NASA/JPL)

Since arriving at the site, NASA scientists have started to call the area "Hogwallow Flats" and is a geological jackpot.

"The nearby rocks are a sight to behold," the Perseverance Rover's Twitter account said, adding that it is "paradise" for rock nerds.

On its journey to the Martian bacon strip, NASA scientists also noticed something that seemed out of place.

Nestled in the crevasse of a rock was a shiny object unlike anything else in the otherworldly landscape.

After a closer look, NASA determined that it was not a rock, but a piece of foil from Earth that was used during the ascent stage when Perseverance landed on Mars.

Two images of a piece of foil found on Mars that were used as a thermal blanket when NASA' perseverance Rover enters the atmosphere of the Red Planet. (NASA/JPL)

While it was easy to identify the object as foil, it did raise a burning question that may forever be unanswered.

"My descent stage crashed about 2 km away," the rover's Twitter account said. "Did this piece land here after that, or was it blown here by the wind?"

NASA's Perseverance Rover has snapped and sent home over one-quarter of a million photos from the surface of Mars since landing in 2021.

It is also outfitted with a small weather station so that the robot can gather atmospheric data on Mars, including temperature, wind speed, humidity and the amount of dust in the air.

On June 9, 2022, Perseverance reported a high temperature of 2 degrees Fahrenheit below zero, followed by an overnight low of 113 F below zero. It is currently late autumn where Perseverance is located, meaning that even lower temperatures are right around the corner as it approaches winter.

NASA's Curiosity Rover may have spied a Martian flower