The treacherous, 43-mile-long cliffside stretch of dirt and gravel is not for the faint of heart even when the weather is good -- and it’s easy to see why it's earned the nickname "Death Road."

Located at a high elevation with no protection, Bolivia’s Yungas Highway is regarded as one of the most dangerous roads in the world.

Nestled high among the hills of La Paz, Bolivia, it is widely regarded as one of the most dangerous roads in the world. The threat of fog, landslides, frequent steep cliffs and hairpin turns have appropriately earned this switchback the grim nickname "Death Road."

Officially known as North Yungas Road, this 43-mile-long stretch of mainly gravel and dirt has barely the width of a car and offers zero protection for vehicles despite the extreme and brutal terrain this narrow, winding route presents.

A number of people have lost their lives on the treacherous roadway -- it's estimated that about 300 drivers who dare to make the arduous trek die each year, a statistic marked by the many crosses that stand as memorials along the path, according to Discovery.

Out of La Paz, the road climbs to 15,260 feet, traversing a mountainous terrain before making a steep descent to nearly 4,000 feet. 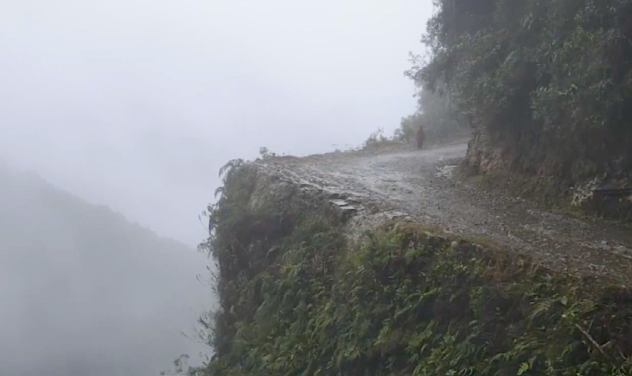 Bolivia's "Death Road": One of the world's most dangerous mountain paths. (Anadolu Agency via Reuters)

The lengthy route was originally cut into the mountains in the 1930s by Paraguayan prisoners of war during a battle with Brazil in the Chaco War, which was fought over control of the northern part of the Gran Chaco region in South America. It was built as a connecting route between the Bolivian capital and the low-lying town of Coroico, allowing merchants a vital link to shuttle then sell goods from the Amazon rainforest in the villages.

Those traveling on the road had to do so in smaller vehicles, as the tight turns aren't large enough for many trucks. 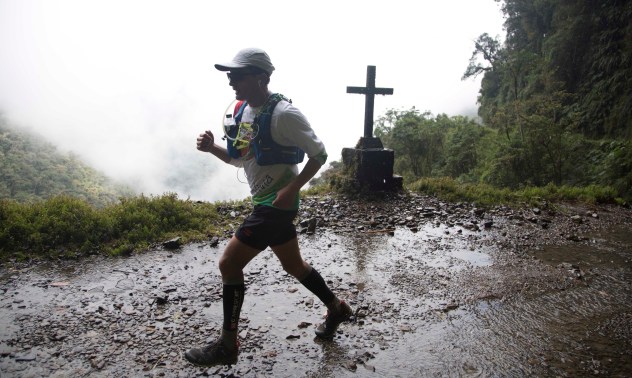 A runner in the 2017 Sky Race runs on the "Death Road" in Bolivia on July 30, 2017. The route has become popular among runners and mountain bikers. (AP Photo/Juan Karita)

In 1995, the Inter-American Development Bank christened it as the "world's most dangerous road," as did other entities. Some have described it as a "lethal journey."

Yet, dangers aside, "Death Road" has become a tourist attraction for many.

The notoriety brought on by North Yungas Road has made it popular among thrill-seekers and extreme sports enthusiasts. The road was even featured several years ago in BBC's "Top Gear: Bolivia Special."

Mountain bikers can often be seen passing under waterfalls that come cascading down onto Death Road as fog settles on the snaking roadway.

"We ride our bikes down the asphalt. We have a 180-degree landscape ... and we witness glacier formation due to a geological process and the change of weather," local tour guide Diego Del Carpio told Reuters.

For decades, "Death Road" remained the only link between Coroico and La Paz. But in 2009, a new and less treacherous route was constructed in a nearby mountain range featuring two vehicle lanes and improved pavement and guardrails. The more modern road replaced the northernmost section of the original route, offering a much safer alternative.

The original stretch of road is still used by local workers and even bikers despite the dangerous conditions no matter how good or bad the weather is. More than a dozen cyclists have died in the last decade on the road, according to Atlas Obscura.