Rescuers warned that hope of finding survivors was diminishing after an avalanche set off by the collapse of an Italian glacier during a heat wave killed at least six people.

A large piece of the Marmolada glacier in northeastern Italy broke off on Sunday afternoon, unleashing a torrent of snow, ice and rocks onto an unknown number of unsuspecting hikers below, some of whom were roped together during the dangerous climb. At least seven hikers were killed and more than a dozen others remain unaccounted for following the glacier collapse.

Nine people suffered injuries, most of which were a result of blunt force trauma to the chest and cranium, and were flown to hospitals, The Associated Press (AP) reported. Officials say that the chance of finding any more survivors is slim to none. 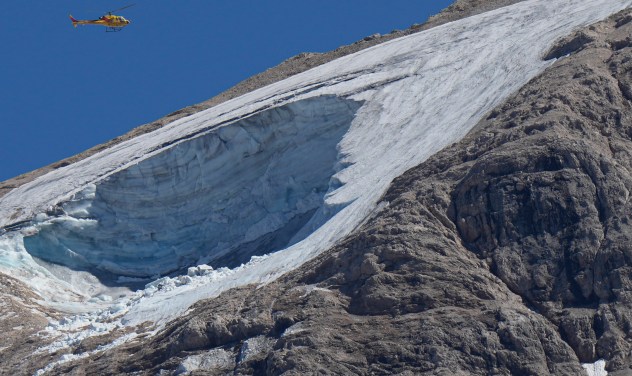 A rescue helicopter hovers over the Punta Rocca glacier near Canazei, in the Italian Alps in northern Italy, Monday, July 4, 2022, a day after a huge chunk of the glacier broke loose, sending an avalanche of ice, snow, and rocks onto hikers. Rescuers said conditions downslope from the glacier, which has been melting for decades, were still too unstable to immediately send rescuers and dogs into the area to look for others buried under tons of debris. (AP Photo/Luca Bruno)

A local politician, Luca Zaia, compared the ice chunk that broke free to an apartment building with initial estimates of its size to be 656 feet (200 meters) wide and 262 feet (80 meters) high. The debris may have come hurtling down the slope at a breakneck speed of nearly 200 mph (320 km/h), experts say.

Authorities are attempting to identify the owners of 16 unclaimed vehicles in a parking lot at the base of the slope to determine whether these individuals are among the missing or have already been accounted for, according to The AP.

Helicopters and drones have been utilized in the rescue efforts as the slope remains too unstable for crews to scour the area on foot.

Thunderstorms have also slowed attempts to find the missing. Italian Prime Minister Mario Draghi was scheduled to visit the area to assess the damage on Monday, but his helicopter was diverted due to the stormy weather.

Thunderstorms continued to impact the region on Tuesday, but will begin to wane slightly on Wednesday, according to AccuWeather Senior Meteorologist Tyler Roys.

Experts say an event such as this is impossible to predict but point to recent heat in Italy as a likely factor in the disaster. Northern Italy experienced its hottest May and June in nearly 20 years, according to an Italian polar sciences researcher.

One day prior to the collapse, the summit of the glacier recorded a record high temperature of 50 degrees Fahrenheit (10 degrees Celsius), according to AFP.