Memorial Day weekend marks the unofficial start of summer, and AccuWeather meteorologists say that a stormy pattern could disrupt outdoor activities across a swath of the central United States.

The stretch of stormy weather will begin as travel for the holiday weekend ramps up. Already, a disturbance in the jet stream caused thunderstorms to develop in eastern Montana and far northern Wyoming Friday night. The main risk was damaging wind gusts, though a tornado was also reported near Perkins, Nebraska.

The severe risk will increase late Saturday as another disturbance in the jet stream moves into the northern Plains. 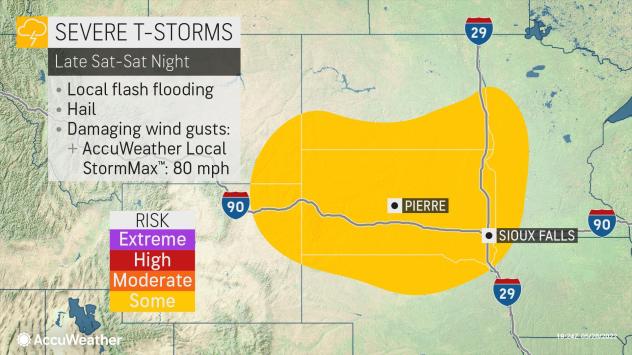 Thunderstorms began to develop late Saturday afternoon and will continue into the overnight hours as opposed to falling apart around sunset.

Thunderstorms will begin to form in west-central South Dakota and move eastward across the state during the evening hours, potentially disrupting travel along stretches of interstates 29 and 90. The storms should form into a line, and wind damage will again be the primary hazard. Some of the strongest storms may also contain a hail threat.

The primary risk for severe thunderstorms will move farther to the south and east on Sunday, from the far eastern Dakotas into Nebraska and Minnesota where a more widespread and significant risk for severe weather may develop. 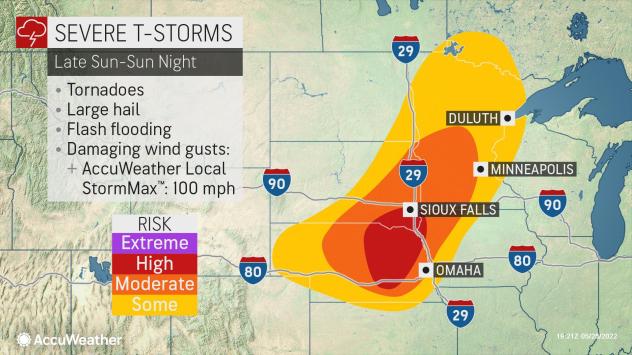 People in Sioux Falls, South Dakota; Omaha and Lincoln, Nebraska; and Minneapolis and Duluth, Minnesota; should be on alert for severe thunderstorms throughout the afternoon and evening, especially those who are planning to spend part of the day outside.

The tornado threat on Sunday is expected to be higher than Saturday, as well as the threat of damaging winds with an AccuWeather Local StormMax™ of 100 mph. Such winds can easily snap trees and power lines and lead to structural damage. High-profile vehicles on the interstates may also be at risk of blowing over in such winds. 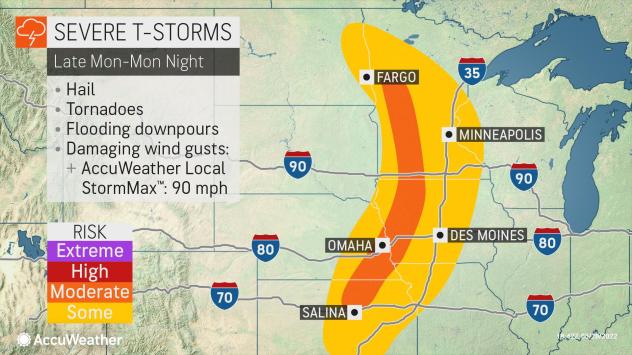 "Areas in the northern Plains that have already received above-normal rainfall over the past month or so will continue to see wet conditions over the holiday weekend," explained AccuWeather Meteorologist Lauren Hyde.

Luckily for the waterlogged region, the heaviest rain may fall in Montana. According to the United States Drought Monitor, much of Montana is experiencing drought. Even with the preceding dry conditions, too much rain in a short period of time can still cause flooding.

Unfortunately, some of the heavier rain may begin to shift into areas of North Dakota which could bring a renewed risk for flooding. 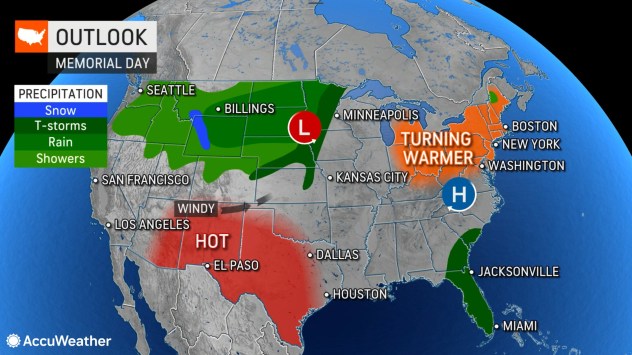 "Downpours on top of already saturated soil can renew the flood risk across the area," said Hyde.

This is especially true over the Rainy River Basin, where water levels are at historic values.

"The next round of rain will push most of the lakes in the Rainy River Basin past their record high levels set back in the early 1900s," said AccuWeather Meteorologist Matt Benz.

This basin is located in far northern Minnesota and adjacent parts of Ontario, where the heaviest rain should fall later on Monday and into Tuesday. 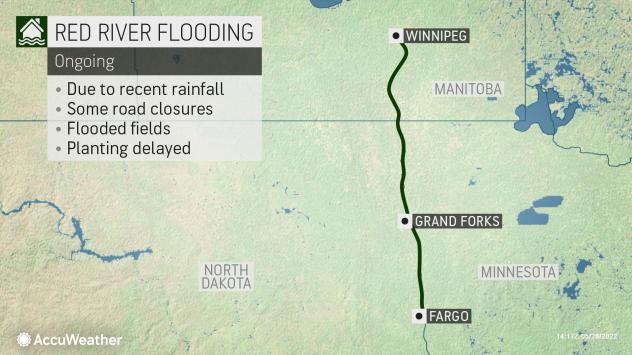 Spotty thunderstorms may return by next weekend, but persistently heavy rain is not expected. With the ongoing flooding, however, any rain will be unwelcome.