Hurricane warnings issued for entire coast of South Carolina as Ian moves off the coast of Florida
President Biden warns of 'substantial loss of life' in wake of Hurricane Ian. Follow live updates.

A number of threats will be possible, including damaging hail and isolated tornadoes.

The threat of dangerous severe thunderstorms will return to the Great Lakes this week, and AccuWeather meteorologists say the storms could unleash a variety of impacts including downpours, hail, gusty winds and even isolated tornadoes.

Experts say severe weather is likely to return to the Midwest through Tuesday evening, and several large metro areas, including Chicago and Detroit, are at risk. 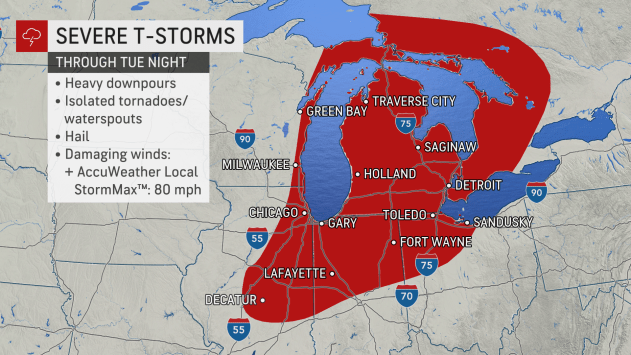 An area of low pressure has already triggered heavy thunderstorms in northern Minnesota to the Northwoods of Wisconsin and the Upper Peninsula of Michigan during Monday night. As of Tuesday morning, there were two dozen reports of hail centered on southeastern Wisconsin and the northern part of the Lower Peninsula of Michigan, according to the National Weather Service's Storm Prediction Center (SPC).

This storm will shift east over the Great Lakes, powering more storms into Tuesday evening.

"The dynamics of the atmosphere change a bit prior to the middle of the week, with more wind shear expected in the lower levels of the atmosphere, especially across the Lower Peninsula of Michigan through Tuesday evening," said Benz.

Not only will hail be a concern into early Tuesday night, but tornadoes will also be possible. Storms can bring heavy downpours, isolated tornadoes, hail and damaging wind gusts with an AccuWeather Local StormMax™ of 80 mph (129 km/h). These storms can impact cities with large populations such as Chicago; Traverse City and Detroit, Michigan; and Toronto, Ontario.

According to the SPC, more than 22 million people are at risk for severe weather into Tuesday evening. Roughly 17 million live in a zone covered by a marginal risk, the lowest threat category out of five levels. This includes Chicago, Detroit and Milwaukee. Just over 5 million live in an area covered by a slight risk, which is one category higher than marginal risk. Cities in this area include Grand Rapids, Lansing and Kalamazoo, Michigan.

How to help those impacted by Hurricane Ida
What's the difference between a tornado watch and a tornado warning?
Meet the man whose name is synonymous with tornadoes
Fall allergies will be in full force across parts of US

AccuWeather meteorologists urge residents to ensure they have a method of receiving weather warnings. Residents should also be prepared to take shelter if necessary.

While parts of northern Minnesota are still in extreme drought, much of Wisconsin and Michigan have little to no drought conditions present, according to the United States Drought Monitor. Flooding will be a possibility in these areas, forecasters say. Traverse City received about 1.42 times its average amount of rainfall in August, while Detroit received over 1.5 times its average. 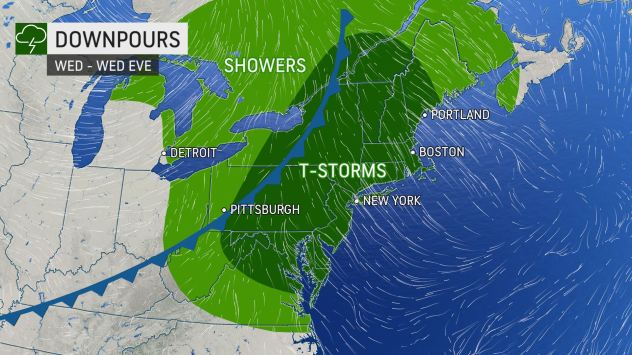 As the storm system travels eastward on Wednesday, it is forecast to bring heavy thunderstorms to cities in the Northeast which were recently impacted by Ida. The storm claimed the lives of at least 51 people across the region, with multiple families perishing from rising floodwaters in basements.

Storm-weary residents need to remain on alert for further flooding issues, especially from Washington, D.C., to New York City and Boston during Wednesday afternoon and evening.

Hurricane Ian pounds Florida in what stands to be 'a life-changing eve...