What to do if you encounter a tornado while driving

Seeking shelter from a tornado under an overpass might sound like a good idea, but meteorologists say that is one of the worst things you could do.

Tornadoes can cause damage once they start to form. If you're driving when a tornado is near, you need to know how to navigate to safety.

Seeking shelter from a tornado under an overpass might sound like a good idea and it's an idea often captured in films, but meteorologists say that is one of the worst things you could do.

"Never try to seek shelter under a bridge or overpass, as these structures can actually amplify the speeds of the winds and they offer little to no protection from flying debris," AccuWeather Storm Warning Meteorologist William Clark said.

The narrow passage underneath an overpass could cause an increase in the wind speed under the bridge.

Clark said there aren't any completely safe options if you're near a tornado while driving, just less dangerous ones.

The best driving decision you can make is to stay off the road until the weather clears, Chris Hayes, second vice president of transportation risk control for Travelers, said.

"Stay low. Stay in your car, secured into your seat belt, and put your head down below the window, covering it with your hands or a blanket if you have one. Or, if you can safely get lower than the level of the roadway, exit your car and lie in that area, using a protective covering like a blanket or tarp if you have one with you," Hayes said.

"Lie down and cover your head with your hands. Being lower than the roadway will allow the strongest winds to pass over you and give you the lowest chance of being struck by flying debris," Clark said. 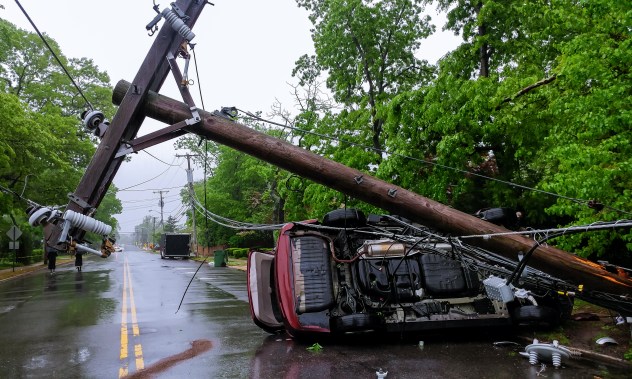 Car turned over after accident with crash electric pole after a severe storm. (photovs/Getty Images/iStockphoto)

Flying debris is one of the greatest risks when a tornado hits.

"Debris from a tornado can turn into missiles that can reach speeds greater than 300 mph in the strongest tornadoes. Matter of fact, estimated winds from the infamous May 3, 1999, tornado that affected Oklahoma City area were around 318 mph," AccuWeather Meteorologist Brett Rossio said.

It is human instinct to run away from danger, and since cars reach speeds that exceed the speed of a tornado’s path, some people try to outrun tornadoes. This is not a good idea for many reasons.

Tornado winds can blow large objects, including cars, hundreds of feet away. Tornadoes travel swiftly, are able to change direction quickly and can lift a car or truck into the air.

“Tornadoes can travel at very high speeds. Forward velocities can range as high as 60 or 70 mph, albeit these speeds are rare. Tornadoes more commonly move at speeds ranging between 20 and 40 mph," Rossio said.

In some states, there is a better alternative than getting into a ditch if a storm catches you on the road.

Kansas has storm shelters along highways in some areas. There are 30 storm shelters located along the Kansas Turnpike. Each shelter has a flashlight, first aid kit, water, batteries and a radio.

Officials stress not to leave your home and drive to a storm shelter in the event of severe weather.

"The Kansas Turnpike Authority (KTA) has a tornado shelter at every toll booth for the toll workers, but they are also open to the public in the event of a tornado. The KTA is the stretch of I-35 from Kansas City through the Oklahoma border," Clark said.

Clark said it would be helpful if the storm shelters were every several miles, but he doesn't think it is realistic to drive 50 miles to the closest shelter when in imminent danger.

Tornadoes and travel: How to stay safe inside an airport or hotel
What should go into a successful tornado drill for your family, business
The difference between tornado watches and warnings