Fall allergies will be in full force across parts of US

Certain regions of the country will experience higher volumes of pollen than others.

Summer is just beginning to wind down and already the scent of pumpkin spice can be smelled wafting from some coffee shops. However, as residents are preparing for a season filled with apple picking, pumpkin carving and colorful leaves, it won't be pumpkin spice and everything nice for everyone. As seasonal festivities kick off, fall allergies will also be back in full force across parts of the nation, affecting millions of Americans, AccuWeather forecasters say.

Meteorological autumn officially begins on Sept. 1, and astronomical fall begins on the day of the fall equinox, which will take place on Sept. 22 this year.

Fall allergies are typically triggered by ragweed, and the pollen from these types of plants that are common in North America can travel as far as the wind carries it. Another cause of fall allergies is mold, which can grow in piles of damp leaves.

According to the U..S Centers for Disease Control and Prevention (CDC), ragweed is one of the largest producers of pollen and the largest contributor to seasonal allergies in autumn. One ragweed plant can produce billions of pollen grains every year. About 23 million Americans suffer from seasonal allergies, commonly known as hay fever, due to the effects of ragweed, according to the American College of Allergy, Asthma and Immunology (ACAII).

Fall allergies can trigger a plethora of unpleasant symptoms including sneezing, runny nose, congestion, itchy throat, and eye irritation, among others, according to the ACAII. The severity of those symptoms can range from mild to severe and, the Cleveland Clinic notes, can exacerbate symptoms caused by asthma.

The onset of symptoms can begin even before the first official day of fall and the duration and intensity of symptoms can be significantly influenced by the weather. And, this year, distinguishing those symptoms from COVID-19 caused by the delta variant could complicate things even further.

Most regions will require a "hard freeze" that lasts for a few days in order to see a full stop to pollen season, AccuWeather Senior Meteorologist Alan Reppert explained. Some regions will luck out in terms of getting that freeze sooner, but some spots farther to the south may not cool off as quickly, resulting in a prolonged allergy season.

Those living around the Great Lakes will be in luck if they experience fall allergies. According to Reppert, colder air will push into the region early, and while many may miss the warmer weather, it will bring allergy season to a swift demise this autumn. 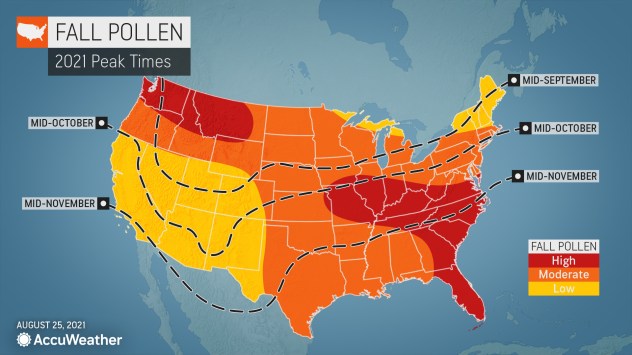 In the central and southern Plains, those who suffer from allergies will not be as lucky. The temperatures in the region will be up and down and are not likely to drop soon enough -- or for a sufficiently long duration -- to bring the pollen season to an early halt.

The northern Plains and Northwest will begin to experience cooler air moving in sooner than places to the south, but they can expect an average pollen season overall, aside from Washington state, much of Montana and northern Idaho where pollen levels are predicted to be high this autumn due to lingering warmth and rainfall that will arrive across the region.

While the Southwest has struggled with drought throughout much of the summer, anything that can grow despite the lack of precipitation will continue to produce pollen through most of the fall.

"The drought may be a bit of a help to the pollen season in the Southwest, though, as the lack of rain is hindering any weed or grass from growing," Reppert explained.

AccuWeather forecasters warn that although not a textbook allergen, ongoing wildfire smoke is likely to contribute to poor air quality at times, which could exacerbate symptoms for those with respiratory illnesses, lung and heart diseases and even those without pre-existing conditions in the western United States this autumn. This season is predicted to end up ranking among the top-five worst wildfire years on record.

A much different threat is in store for people who live along the opposite coast of the U.S. Tropical impacts are expected to continue along the East Coast, and Reppert explained that the active tropical season could result in a longer allergy season from Florida up through the mid-Atlantic.

The hefty amount of precipitation could also trigger more mold growth, according to Kines.

The Southeast in particular is expected to bear the brunt of seasonal sniffles, with high levels of pollen in the forecast. The Gulf Coast is in for a prolonged allergy season as well. "The allergy season along much of the Gulf never completely goes away," Reppert said. "But it does drop significantly" near the beginning of winter. 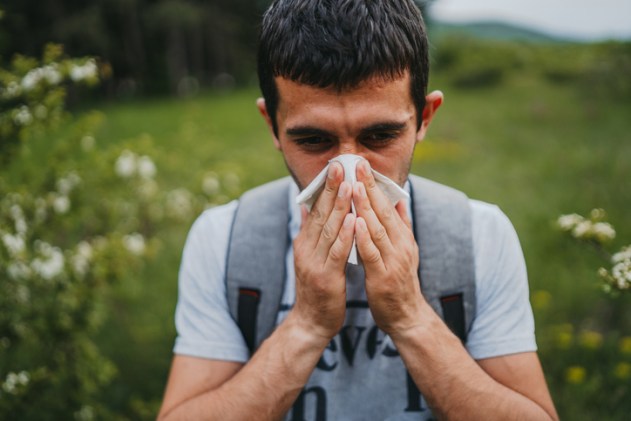 The fall pollen forecast for the northeastern U.S. is split.

In the Adirondacks and central and northern New England, residents will likely have to endure only a short-lived allergy season due to an early-season frost that's expected to be combined with minimal rainfall. In the southern portion of New York state into the mid-Atlantic, however, the story will play out much differently as above-normal moisture and tropical threats that will carry into fall lead to a worse allergy season.

To protect from the effects of pollen, the CDC recommends keeping up to date with pollen forecasts, which can be done easily using the AccuWeather app and by checking AccuWeather.com forecasts.

Kines explained that wind plays a large role in seasonal allergies, as it can move pollen hundreds of miles away from the source. The direction the wind blows is also important, especially along coastlines, he explained. For instance, along the East coast, an easterly wind off the ocean can provide relief for those with allergies, since pollen is not transported in that case.

The CDC also recommends that people who experience pollen allergies avoid touching their eyes when are outdoors, keep windows closed, shower after going outside and use air filters at home.

Allergy sufferers should consult with an allergist on the best plan for controlling symptoms.

With the COVID-19 pandemic carrying on in the U.S., many people may be worried that their allergy symptoms are actually from COVID-19. In addition, evidence indicates that COVID-19 is a seasonal virus that worsens in cold weather, meaning more people are likely to get infected as temperatures drop.

According to Dr. Murray Ramanathan, director of Johns Hopkins Otolaryngology-Head and Neck Surgery in the Greater Washington Area and Associate Professor of Otolaryngology, there are some simple ways to distinguish the two sets of symptoms.

"They're both conditions that can cause very similar symptoms: Stuffy nose, runny nose, sore throat, drainage," Ramanathan told AccuWeather. "The kind of tell-tale signs of allergy that might be different than COVID-19 symptoms are really itchy eyes, itchy nose, itchy throat." 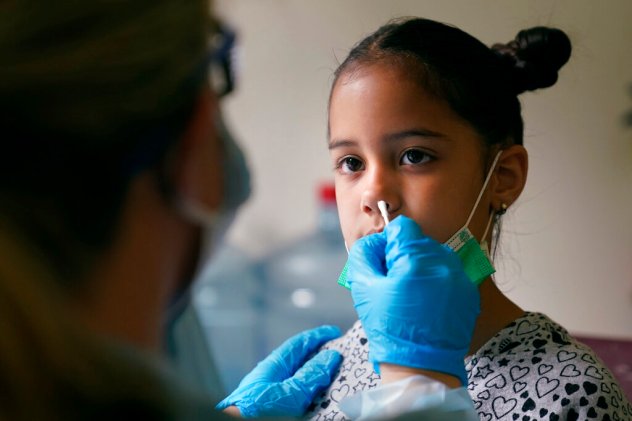 A summer school student is tested for COVID-19 in the nurses office at the E.N. White School in Holyoke, Mass., on Wednesday, Aug. 4, 2021. Schools across the U.S. are about to start a new year amid a flood of federal money larger than they've ever seen before, an infusion of pandemic relief aid that is four times the amount the U.S. Department of Education sends to K-12 schools in a typical year. (AP Photo/Charles Krupa)

"The other thing is allergy symptoms wax and wane," he explained.

While things like pollen counts can cause allergy symptoms to worsen or improve day by day, COVID-19 symptoms tend to get progressively worse.

The delta variant and vaccines have made spotting symptoms even trickier.

Ramanathan said that because the virus is constantly mutating and every person's body reacts to it differently, it can become more of a challenge to say if someone will have symptoms similar to allergies or not. In addition, the understanding of coronavirus symptoms are constantly changing.

With the original strain of the coronavirus, many people were experiencing a fever that worked as a tell-tale sign their symptoms were not allergy-related. Ramanathan said, however, that people who are vaccinated are not typically experiencing fevers when they are infected with the delta variant.

People who do not experience a fever can instead look at their other symptoms, such as a loss of sense of taste and smell, to determine if they are beyond their typical allergy symptoms.

Whether or not a person should be concerned depends on context, such as how many people they've been in contact with or if they've been exposed, Ramanathan explained. He said a person who recently went to a large concert may want to get tested for COVID-19 more readily than a person who was just hiking outdoors and exposed to allergens. According to Ramanathan, it's "reasonable" for a person to take allergy medicine to see if symptoms improve, but he advised keeping a close watch on whether symptoms get worse.

"If you feel like you're getting worse, it's reasonable to get tested for COVID, especially if symptoms are progressive," he said. "The last thing you want to do is chalk it up to allergies and continue thinking it's allergies and then it be COVID."