Intense thunderstorms could elevate the risk of power outages for millions across the central U.S. through midweek, including the potential for a particularly dangerous complex of storms known as a derecho.

AccuWeather forecasters say summer heat will continue to set the stage for damaging thunderstorms this week as millions of residents find themselves in the path of potent storms for several days in a row. On Tuesday afternoon, a line of powerful thunderstorms barreled across parts of the northern tier of the United States, an unfolding weather event that AccuWeather Chief Meteorologist Jonathan Porter warned was "likely a derecho in the making."

Into Tuesday night, severe thunderstorms sliced across a large swath of the northern United States. The National Weather Service has sent out several alerts Tuesday afternoon, including severe thunderstorm watches for western Iowa through 10 p.m. CDT and for Chicago through 12 a.m. CDT Wednesday.

The first of the severe storms took place across portions of Montana and the Dakotas. These thunderstorms are expected to become more intense as they track southeastward portions of Minnesota, Iowa, Wisconsin and Illinois into the remainder of Tuesday night. Areas from central South Dakota to east-central Iowa have a high risk of violent and damaging thunderstorms, AccuWeather meteorologists warn. The toll on agriculture, including the corn crop, could be significant, with cornfields already seen flattened by high wind gusts in South Dakota. 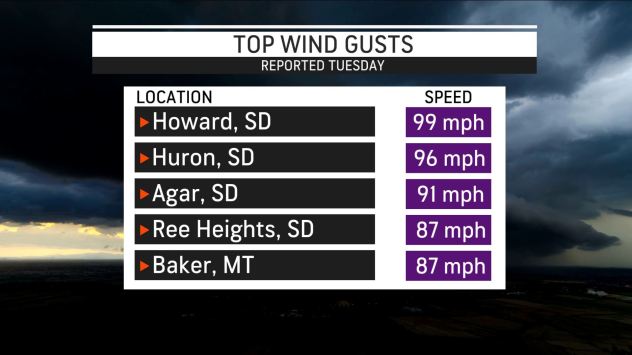 Top wind gusts reported in South Dakota Tuesday included a 99 mph gust in Howard, as well as immense gusts felt in Huron (96 mph), Agar (91 mph) and Ree Heights (87 mph). As the storms approached Sioux Falls, the sky became engrossed in a greenish hue amid reports of strong winds and hail. More than 3 inches of rain fell on portions of Sioux Falls during the Tuesday afternoon storms. In total, the Storm Prediction Center received over 300 reports of damaging winds and hail, the majority of which came from the likely derecho in South Dakota and Iowa.

With wind of such a high magnitude, there is a greater risk for significant, long-lasting power outages. As of 8:28 p.m. CDT Tuesday, over 18,000 customers were cut off from power in South Dakota, out of the 310,000 customers tracked on PowerOutageUS. This included over 50% outage in Beadle County in the eastern portion of the state.

If wind damage occurs from the same complex of storms over hundreds of miles, it may be considered a derecho. A derecho is a storm complex that causes damage continuously or intermittently for 400 miles or more along a 60-mile-wide or more swath, according to the Storm Prediction Center (SPC).

Recent derechos have caused extreme damage in the U.S. A recent notable example is a derecho that caused widespread destruction across Iowa in August 2020, decimating fields of crops with wind gusts up to 140 mph. 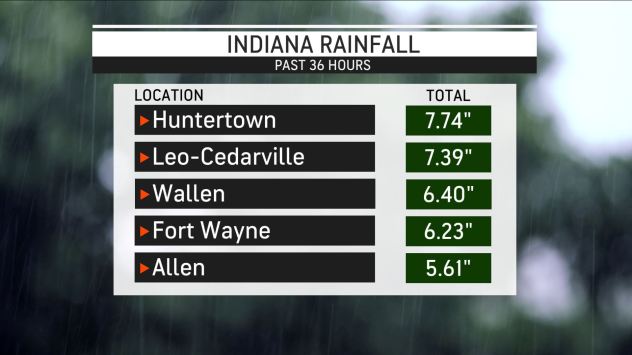 Aside from the destructive winds seen on Tuesday, flooding rainfall was the greater threat for many in the Midwest. As multiple rounds of heavy thunderstorms moved over the same locations in a process known as "training", rainfall totals were able to quickly rise for an extended period of time.

Some of the highest rainfall totals were in Indiana. As of late Tuesday night, over 6 inches of rain had been reported in Fort Wayne, with a maximum of nearly 8 inches in Huntertown.

On Wednesday morning, a Flood Watch remained in effect from northwest Indiana to West Virginia. In areas with especially heavy rainfall, warnings were in effect. This includes Columbus, Ohio, where heavy rain prompted the issuance of a Flash Flood Warning. 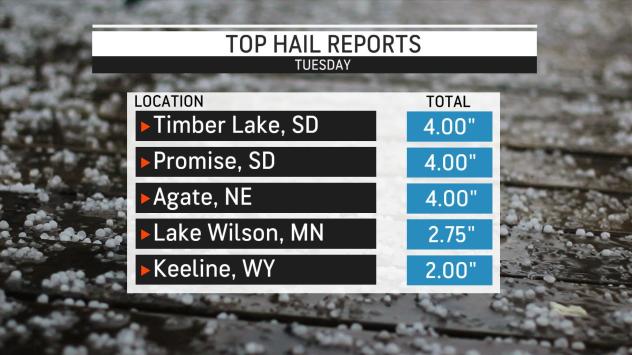 While derechos and summer thunderstorms may not often become prolific hail producers, there were a handful of very large hail reports across the northern Plains. In Agate, Nebraska as well as Timber Lake and Promise, South Dakota, hail the size of softballs was reported.

Intense storms are set to continue on Wednesday, with the focus shifting only slightly as two separate areas will need to be monitored. 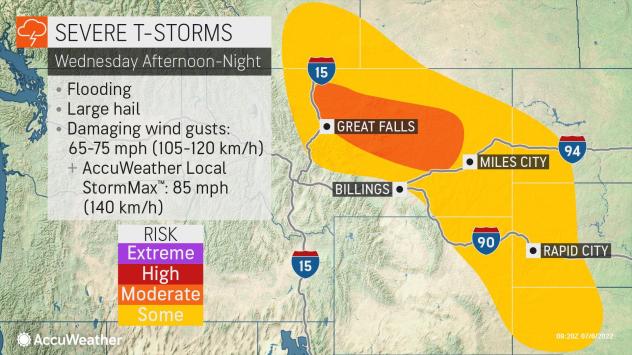 Storms will begin to fire up across portions of Montana Wednesday afternoon and track eastward throughout the daytime hours. By the evening, storms are expected to take on a more southeast motion and reach portions of Wyoming as well as North and South Dakota.

The coverage of storms in this area Wednesday is not expected to be as widespread as the feisty storms from earlier in the week. However, any storms that do develop will be able to produce hail, damaging wind gusts and torrential rainfall.

Torrential rainfall can quickly lead to flash flooding within the area of interest Wednesday, especially given soggy antecedent conditions. 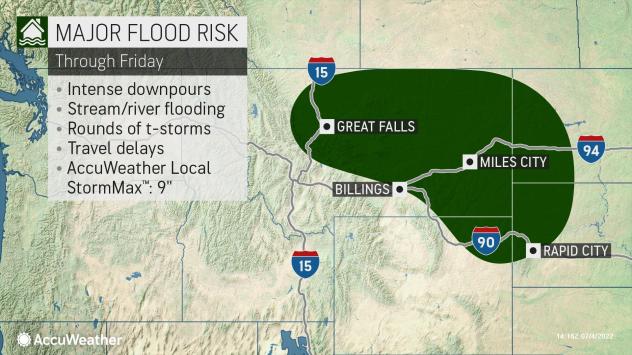 "These repeated rounds of thunderstorms could produce heavy rainfall on the order of 2-3 inches in a short period of time, elevating the risk for rapidly rising water, including flooding of creeks and streams as well as roadways," Thornton said.

Portions of Montana and the Dakotas have already been deluged this week, with parts of South Dakota totaling 4-6 inches of rain from late Sunday to Monday. Flash flooding at the start of the week turned streets into raging rivers in Helena, Montana.

AccuWeather forecasters have pinpointed the Midwest, Mid-Atlantic and Carolinas as other areas to watch for severe weather Wednesday afternoon. 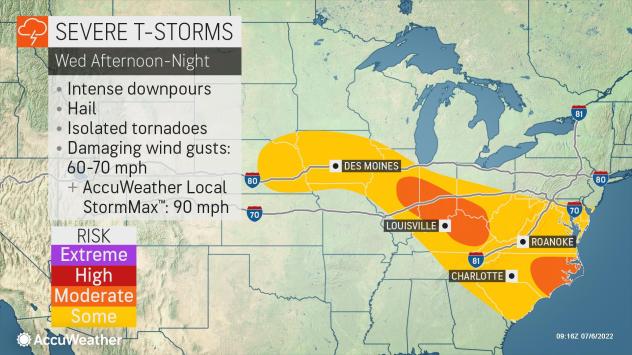 Clusters of storms are likely to develop from Nebraska and Iowa through the Ohio Valley, with a separate area of storms developing in the Carolinas and moving toward the coast.

Storms in the Midwest Wednesday can produce threats including damaging wind gusts, hail, heavy rainfall and even an isolated tornado or two.

The severe weather threat will shift east on Thursday, with thunderstorms expected to develop to the east of the Appalachians. 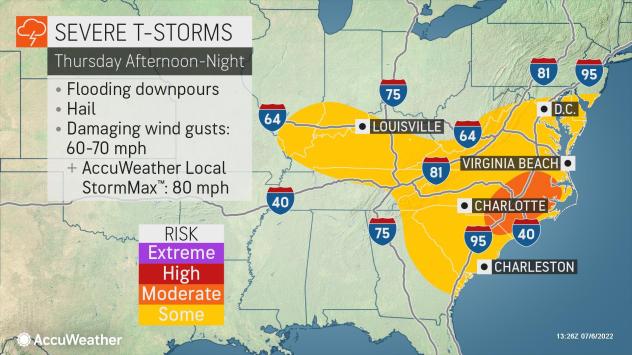 In cities such as Richmond, Virginia and Charlotte, North Carolina, storms should reach their peak during the typical afternoon and evening time period before slowly decreasing in intensity. Flooding rainfall and damaging winds will be the primary threats, though some hail or an isolated tornado cannot be ruled out.

Toward the west, a separate cluster of thunderstorms may develop in the Ohio Valley and move eastward during the evening. While not as intense as some storms seen in recent days, these storms would be capable of at least isolated damaging wind gusts.

Later in the week, forecasters say the risk for widespread severe weather across a wide swath of the country could temper somewhat. However, Montana residents will not be out of the woods. Rounds of rain and storms will continue to target the state into at least Thursday.