Periods of heavy rainfall can lead to flash flooding in parts of southern Europe, an area hit hard by the growing global health crisis.

A storm that brought rain and thunderstorms to Spain and Portugal last week reorganized over northern Africa through the beginning of the week.

As the storm approaches southern Europe into the second half of the week, it will pull in moisture from the Mediterranean Sea.

The storm is expected to become powerful, but it is not expected to pull in enough warm air or become strong enough to be considered a medicane. 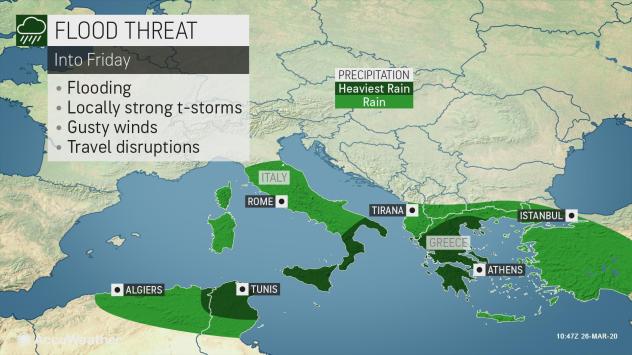 Rain and thunderstorms are expected to spread from Algeria and Tunisia in northern Africa to Italy and Greece through Friday. Any thunderstorms that develop can become strong and produce downpours, strong winds and hail.

Widespread rainfall totals of 25-50 mm (1-2 inches) are expected across the region.

In areas that have repeat downpours and heavy thunderstorms, rainfall amounts can climb to 50-100 mm (2-4 inches). An AccuWeather Local StormMax™ of 200 mm (8 inches) is possible, mainly along southern and eastern facing mountain slopes.

As of Thursday afternoon, the Catania airport, on the eastern side of the island of Sicilia, already recorded 168 mm (6.6 inches). Cantanzaro on mainland Italy reported 85 mm (3.3 inches) during the same time frame.

This amount of rainfall in a short amount of time can will increase the risk of flash flooding and mudslides in rugged terrain.

"While travel will be limited due to lockdowns across the region, blocked roadways will hinder travel to grocery stores and medical centers," stated AccuWeather Meteorologist Tyler Roys.

Localized flooding and gusty winds will also pose a threat to temporary structures hospitals have set up as triage centers.

"The heating demand is also expected to go up as chilly conditions linger over the area. More private residences will be turning on the heat to combat the chill while offices and public spaces will remain abandoned," added Roys.

Colder air will also bring periods of snow to the higher elevations of southern Europe.

Dry conditions are forecast to return to Italy into the weekend, but periods of rain will continue at times across Greece as the storm moves toward the Middle East.

More stormy weather could return to both Italy and Greece by early next week.