In supermarkets around the world, long lines are forming as measures are put in place to curb panic buying due to COVID-19. This Sainsbury’s in London, England, was no exception on March 19.

After little to no widespread snow across much of Europe during the winter season, the first few days of spring brought the first accumulating snowfall to some cities in southeastern Europe.

A storm that brought wet weather to the United Kingdom on Thursday moved across northern Europe through the end of the last week.

Thanks to Nick Vasilkovski for sending the video. Posted with permission. pic.twitter.com/VqK72bKtSf

As the storm moved over the eastern part of the continent this past weekend, it slowed down and began to strengthen. These two changes allowed for cold air to be pulled down alongside the storm, causing it to become more impactful.

This influx of colder air caused any rain showers to mix with, then change over to snow as precipitation spread from southern Germany into Ukraine and south into northern Romania through Saturday night.

On Sunday, the storm continued to push farther south. Precipitation that started as rain over Romania and the northern Baltic states changed to mainly snow as it spread. 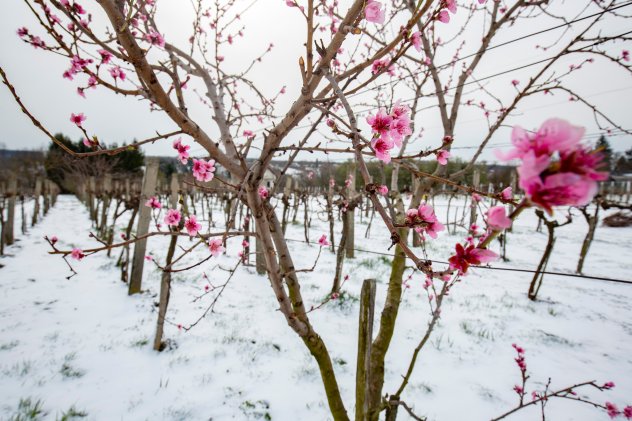 Before snow showers ended across parts of Slovenia, Hungary and Romania Monday night, the storm dumped 10-20 cm (4-8 inches) in some locations. Higher amounts were reported across mountainous areas.

Showers spread as far south as Greece through the beginning of the week, but enough warmth from the Mediterranean kept precipitation as all rain outside of the northern mountains.

The storm lingered over southeastern Europe into the middle of the week, which kept periods of rain and snow showers over the region.

Through the beginning of the week snowfall totals of 3-8 cm (1-3 inches) spread across the Balkans, including lower elevations. Snowfall totals climbed 8-15 cm (3-6 inches) from southern Romania and Bulgaria to Slovenia.

Heavy snowfall in Blagoevgrad, Bulgaria, March 24th. Thanks to Kiril Spasov for the report - posted with permission. pic.twitter.com/PA0IQqrtoW

While travel may be limited in cities such as Munich, Germany; Prague, Czech Republic; Budapest, Hungary; and Bucharest, Romania; due to restrictions to limit the spread of the coronavirus, anyone heading out for fresh air or to pick up groceries should be cautious of snow-covered roadways and slippery conditions into Wednesday night.

Gusty winds also accompanied the storm and lead to times of blowing snow and reduced visibility.

After a mild winter across Europe, accumulating snow may come as a surprise to residents across the area.

Through the winter season, Munich, Germany, had two days of measurable snowfall on Dec. 2 and Feb. 27, with about an inch reported each day.

Spectacular change from spring to winter in Daruvar, Croatia. Last 3 days in a row, from 22 degrees C to -2 C! Thanks to Martina Von Scholz for the report - posted with permission. pic.twitter.com/IEIHRb9jbl

Budapest, Hungary, did not record snow through this winter season.

As snowfall begins to taper off across southwestern Europe through the second half of next week, another storm will race into the region and could bring flooding rainfall to parts of Italy and Greece.