AccuWeather meteorologists are growing increasingly confident that a new tropical system will form in the Atlantic Ocean basin during the final days of June.

A tropical rainstorm that has been designated as Potential Tropical Cyclone Two by the National Hurricane Center (NHC) is forecast to travel across the southern Caribbean Sea while remaining very close to the shores of South America through Thursday. Tropical storm warnings were in effect Thursday morning for portions of Venezuela and Colombia ahead of the developing system's approach.

AccuWeather meteorologists say the system could strengthen into a tropical storm at any time over the next several days, but it is when the system approaches Central America this weekend that rapid strengthening could occur.

The storm's fast forward speed will limit the amount of time the system has to strengthen over the southwestern Caribbean. For this reason, the system may fall short of reaching Category 1 hurricane status, but can still hit eastern Nicaragua as a strong tropical storm with gusts close to hurricane force (74 mph).

There is also a chance for a system in the western Gulf of Mexico to become a tropical depression in the short term. The next two names on the list of tropical storms for the 2022 season are Bonnie and Colin.

As of 8 a.m. EDT Thursday, the Caribbean rainstorm was located about 710 miles (1140 km) to the east of Bluefields, Nicaragua, and was moving swiftly toward the west at 20 mph (31 km/h). Maximum sustained winds were near 40 mph (65 km/h). Tropical-storm-force winds extend outward up to 80 miles (130 km) from the center, according to the NHC. 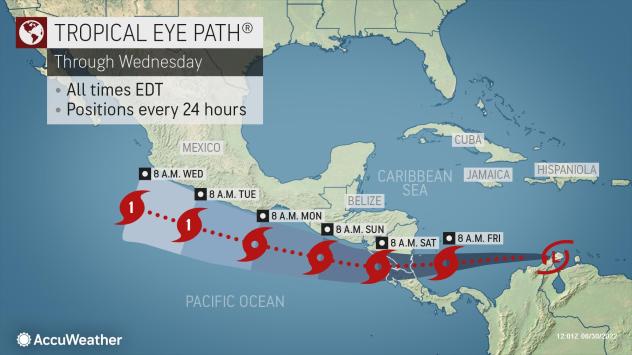 The storm passed over the southern Windward Islands Tuesday evening on its track just north of Venezuela. On Wednesday afternoon, the government of Nicaragua issued a Hurricane Watch from the Nicaragua-Costa Rica border northward to Laguna de Perlas, as well as a Tropical Storm Watch for other regions.

On Thursday morning, the center of the disturbance was noted as passing over the northern tip of the Colombia Peninsula.

"While waters are quite warm, dry air is absent and wind shear is low; the rainstorm will struggle with proximity to the large landmass of South America for the balance of this week," AccuWeather Chief On-Air Meteorologist Bernie Rayno said. In simple terms, wind shear is the presence of strong straight-line breezes that can prevent or limit tropical development.

Hurricane hunter aircraft began to investigate the storm on Monday and through Wednesday morning could not find a closed circulation. Tropical-storm-force wind gusts of 40 mph have been indicated by aircraft in thunderstorms, but satellite images have barely shown any circular motion to the cloud cover thus far.

In order for a tropical depression or storm to be officially declared by NHC, there must be a closed circulation. Through Tuesday, the system had been behaving like a strong tropical wave and not a tropical storm. Thunderstorms have grown more robust since Tuesday and there is the potential for the system to be upgraded to a tropical storm at any time.

Even if a tropical depression or storm is declared with the system through Thursday, the proximity to South America and the equator, as well as fast forward movement, will likely mitigate strength and prevent rapid intensification in the short term. 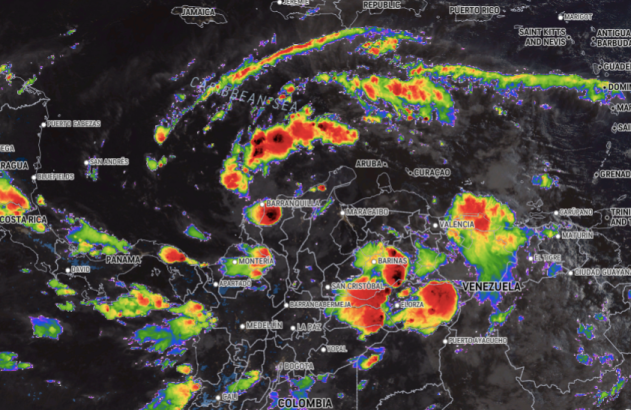 An AccuWeather Enhanced RealVue™ Satellite image shows a tropical rainstorm tracking along the southern edge of the Caribbean Sea on Thursday, June 29, 2022. Forecasters said while the system was less organized on Thursday, due to its encounter with South America, strengthening will take place through the end of the week.

The northern portion of South America, as well as islands in the southern Caribbean, will be subject to localized heavy rainfall that can lead to flash flooding, as well as gusty winds from strong thunderstorms that can trigger sporadic power outages.

Even a weak tropical system can produce locally dangerous seas for small craft and hazards for swimmers. This storm is rated as less than one on the AccuWeather RealImpact™ Scale for Hurricanes for South America. 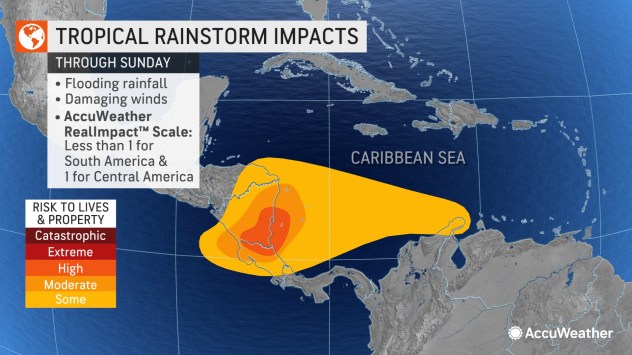 A tropical cyclone passing this far south is extremely rare in June and is somewhat more typical during September and October.

"During June, there has never been a named tropical system in more than 150 years of records near the coast of South America during La Niña conditions," AccuWeather Senior Meteorologist John Feerick said. During a La Niña, cool waters over the eastern part of the tropical Pacific tend to alter weather patterns and knock down wind shear over much of the Atlantic basin. This tends to assist with tropical storm development over the Atlantic.

Since record keeping of Atlantic tropical systems began in the mid-1800s, only 25 storms have passed within 50 nautical miles of Aruba, according to data from the National Oceanic and Atmospheric Administration. Of those 25 storms, only one brushed by the country during the month of June -- an unnamed hurricane on June 29, 1933.

While needed rain can fall in some communities, locations in the path of the storm may not be used to the significant impacts of a close encounter with a tropical system. 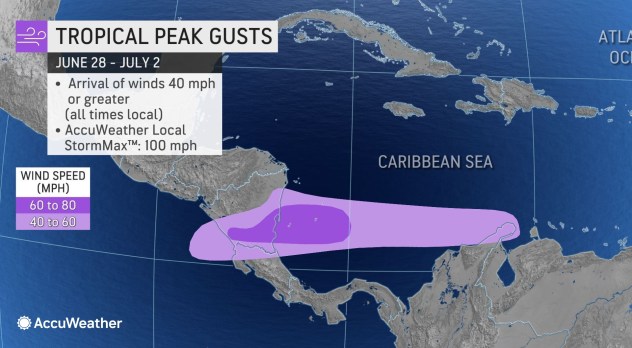 Despite the tropical rainstorm's expected troubles while moving westward along the coast of South America, it will reach the warm, open waters of the southwestern Caribbean at the end of the week. During this time, re-organization and strengthening are expected, according to AccuWeather meteorologists.

AccuWeather meteorologists have maintained that the risk to lives and property will be significant with this system as it approaches and crosses Central America this weekend. As the system nears land, the nation of Nicaragua may be most adversely affected, although northern Costa Rica can also receive flooding rain and strong winds from the potential tropical storm. This storm is rated as 1 on the AccuWeather RealImpact™ Scale for Hurricanes in Central America. The exact track and strength of the system will determine which areas may get hit the hardest.

The greatest threats to lives and property are likely to stem from the torrential rain that can lead to flash floods and mudslides. About 12-16 inches (300-450 mm) is forecast over a large part of eastern Nicaragua and northern Costa Rica with an AccuWeather Local StormMax™ of 26 inches (660 mm).

Rainfall of this magnitude in 24-36 hours can lead to catastrophic flash flooding. The heaviest rain would arrive in eastern Nicaragua Friday night and spread northwestward across Honduras Saturday. 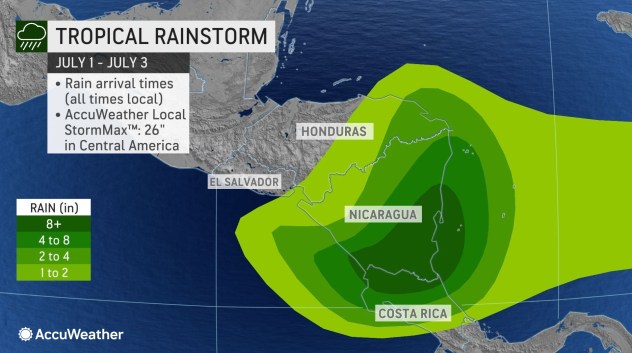 Coastal Nicaragua is the part of Central America most likely to experience locally damaging winds and coastal flooding, according to AccuWeather forecasters. Gusts to near hurricane-force (74 mph or 119 km/h) or greater are likely.

Widespread wind gusts of 60-80 mph (100-130 km/h) are expected with an AccuWeather Local StormMax™ of 100 mph (160 km/h) across south-central Nicaragua. It’s in this part of Central America where the storm is forecast to make landfall, perhaps as a hurricane. Winds this strong are likely to cause power outages and some damage to structures.

The storm's quick forward speed is likely to allow the system to survive the trip through Central America and over waters of the eastern Pacific Ocean. Because of this survival factor, the system would retain the same name, should it reach tropical storm status as predicted. Once in the Pacific, strengthening would again occur, where the system could become or regain hurricane strength.

There are other potential candidates for a tropical depression or storm in the Atlantic as activity in the basin starts to ramp up.

A tropical rainstorm located over the western Gulf of Mexico will bring locally heavy rain and gusty thunderstorms to parts of eastern Texas and Louisiana late this week.