A large cluster of showers and thunderstorms dubbed a tropical rainstorm by AccuWeather meteorologists is expected to bring much-needed rain to the western Gulf Coast late this week.

A large mass of showers and thunderstorms over the western Gulf of Mexico that AccuWeather meteorologists have dubbed a tropical rainstorm came onshore in Texas early Friday morning. While the system ran out of time to evolve into a tropical depression prior to making landfall, the main impacts from the system will be flooding downpours and drought-easing rainfall as the storm moves inland, forecasters say.

"The system had a broad, elongated circulation but a poorly-defined center based on satellite information at midweek, despite it showing signs of organization from Monday to Tuesday," AccuWeather Senior Meteorologist Dan Pydynowski said. Some organization began to occur at midday on Thursday, but multiple centers existed, rather than one consolidated core. 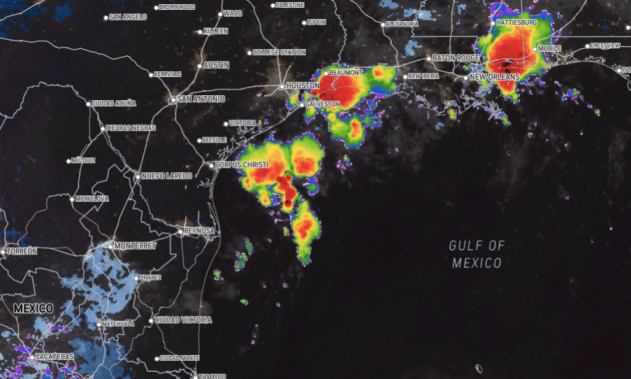 While clusters of thunderstorms with torrential rain continued to erupt over the western Gulf of Mexico on Thursday, June 30, 2022, forecasters said the circulation of the tropical rainstorm remained broad and weak. (AccuWeather/Enhanced RealVue™ satellite)

As the rainstorm pivots northward, showers and thunderstorms will increase in frequency over much of northeastern Texas and expand over western Louisiana and into southern Arkansas through the end of the week. In this zone, a general 1-2 inches of rain is in store, forecasters say. 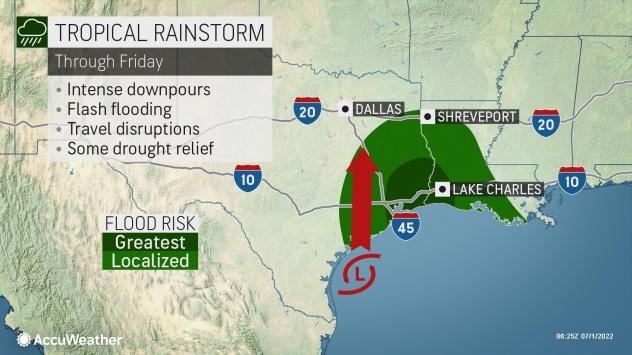 The heaviest rainfall will occur from just east of Houston to Beaumont, northward to Lufkin, Texas, into Friday afternoon where a general 2-4 inches is likely. There is the potential for an AccuWeather Local StormMax™ rainfall of 16 inches to be realized.

Much of Texas is suffering from moderate to exceptional drought, according to the United States Drought Monitor. Some of the rain from the storm will fall on drought areas in the eastern part of the state as well as abnormally dry to drought areas of Louisiana. However, much of the heavy rain will avoid the central bend in the Texas coast. Crops have been suffering from the drought with many farmers facing a significant reduction in yields for this year, according to AccuWeather Reporter Bill Wadell.

Since March 1, Corpus Christi has only received about one-third of its normal rainfall of 11 inches. Rain has been even more scarce this month with a mere 0.27 of an inch falling, compared to a normal of 3.56 inches. It has been a similar story in Houston and College Station with rainfall amounts of 6% and 5% of normal, respectively, over the same timeframe.

However, storms of this nature largely contain towering clouds and thunderstorms, which are capable of producing torrential downpours. Rainfall rates of 2-4 inches per hour can occur. At this rate, even the most porous soil can be subject to flash flooding. There is a high risk of flooding downpours, especially in urban areas, from the central Texas coast through northeastern Texas and western Louisiana into Friday evening.

Meteorologists say motorists should anticipate travel delays as some roads could be blocked by rushing water and/or ponding, including in the Houston area. Departing or arriving flights at airports across the region could also be delayed or canceled due to the tropical weather. 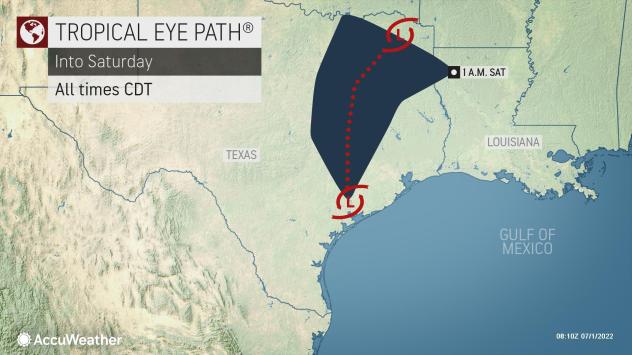 Most of the downpours and thunderstorms associated with the tropical rainstorm are likely to remain to the east of San Antonio and the Dallas metro area.

Some of the more intense thunderstorms near the Texas coast will bring the risk of strong wind gusts, hail and an isolated tornado or waterspout.

Due a limited risk of flooding, the AccuWeather RealImpact™ Scale is less than one for Texas with this system. 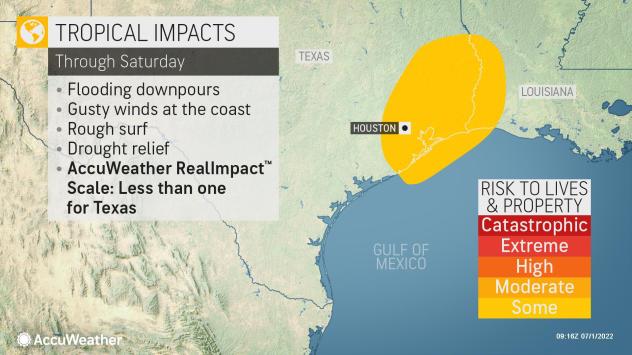 Showers and thunderstorms associated with the tropical rainstorm will join a broad area of moisture over the southern United States that will persist through much of the Independence Day weekend. While a total washout is not predicted, storms in the region could produce isolated flash flooding and strong wind gusts. People should move indoors at the first rumble of thunder and never attempt to drive through flooded roads, experts advise.

Elsewhere in the tropics, AccuWeather meteorologists expect a system over the southern Caribbean to become a strong tropical storm prior to slamming into Central America this weekend. The next tropical storm to form in the Atlantic basin will be named Bonnie.

Another disturbance hundreds of miles to the east of the system in the Caribbean is also being monitored by forecasters. Additional tropical development of that system could occur in early July.

Why this state is home to ‘Flash Flood Alley'