Just hours after the final name on the 2020 Atlantic hurricane list was used to reflect the formation of Wilfred in the eastern Atlantic, the Greek alphabet was promptly put to use for the first time since 2005. 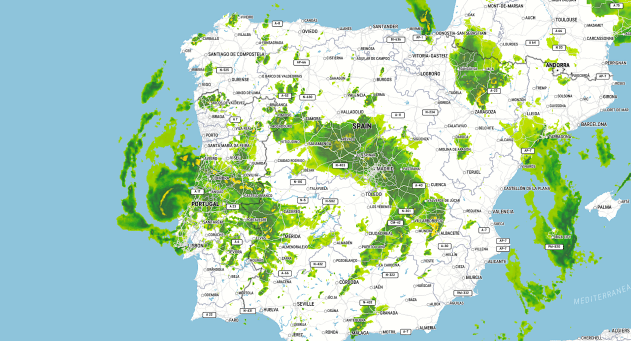 Five hours after forming, Alpha made landfall about 120 miles north of Lisbon, Portugal, with maximum sustained winds of 45 mph.

Ten and a half hours after forming, Alpha quickly lost wind intensity and became a remnant low over the District of Viseu, Portugal Friday night (Eastern time).

AccuWeather Senior Weather Editor Jesse Ferrell noted that Alpha did not have a well-defined center when viewed on radar on Friday.

Although Alpha's life as a storm was short-lived, it will continue to bring impacts to portions of Portugal and Spain for a time.

On the left, Subtropical Storm Alpha in the Eastern Atlantic.

On the right, "Medicane" Ianos in the Mediterranean Sea. pic.twitter.com/O2PhVQuq6N

During the 2005 season, Alpha didn't form until Oct. 22, which shows just how remarkably active the current season has been. That year, Alpha was a Caribbean storm that brought deadly impacts to Haiti and the Dominican Republic. At least 26 deaths were blamed on the storm.

This season's Alpha set a new record for the earliest 22nd-named storm to develop in the basin, forming nearly one month earlier than the previous record holder for that title, the notorious Wilma from 2005. Due to an unnamed storm added to the 2005 season in a post-season analysis between Stan and Tammy, records from "T" storms on don't align with their respective letters.

Wilma did not become a named storm until Oct. 17 that year, but went on to strengthen into the most intense hurricane ever recorded in the Atlantic at Category 5 strength, packing winds of 185 mph and a central barometric pressure of 26.05 inches of Mercury (882 millibars).

Around the same time that Alpha made landfall, the second letter of the Greek alphabet, Beta, was used when Tropical Depression 22 strengthened into a tropical storm in the southwestern Gulf of Mexico.

The arrival of Wilfred, Alpha and Beta continue what has been a hyperactive Atlantic hurricane season that rivals and could even exceed the number of names used in the historic 2005 season. AccuWeather meteorologists recently upped their forecast to say up to 28 named storms could form this season.

'It felt like the trailer was going to take off.' Residents recount riding out Hurricane Sally
What is a subtropical storm?
Teddy may approach New England, Atlantic Canada as hurricane after blowing past Bermuda