Despite losing wind intensity while pushing over land, the system will stir hazards well beyond landfall. Downpours will threaten flooding up and down the Eastern Seaboard, and severe weather will be a danger.

AccuWeather forecasters continued to monitor Nicole’s projected path as it moved up the Eastern Seaboard Friday. Significant impacts from the storm will be felt from Friday to Saturday in the Interstate 95 Northeast corridor ranging from strong wind gusts and perhaps even a few tornadoes.

On Wednesday, Nicole was upgraded to a Category 1 hurricane as it approached the eastern coast of Florida, with landfall occurring near Vero Beach, on North Hutchinson Island, at 3 a.m. Thursday. Nicole is expected to impact the southeastern U.S. through Friday evening while transitioning to a tropical wind and rainstorm.

Tropical rain reached the cities of Washington, D.C., Baltimore and Pittsburgh by the Friday morning rush hour and will continue to advance northeastward through Friday night.

Widespread rainfall of 2-4 inches (50-100 mm) is likely from western Virginia through the eastern Ohio Valley, the Appalachians and into northern New England before rain comes to an end late Friday night or Saturday morning. Pockets of more than 4 inches of rain are possible in eastern Ohio and in the mountainous terrain of Virginia. 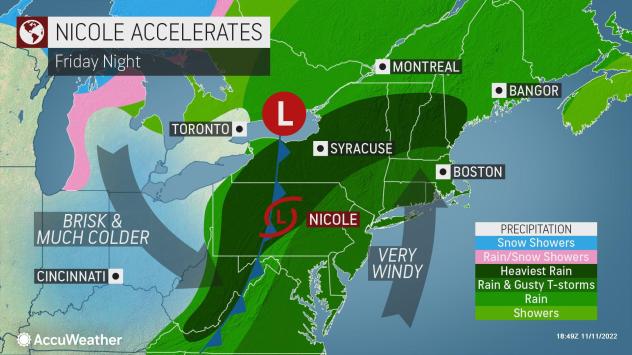 The influx of tropical moisture from Nicole into a cool environment with the effects of hilly terrain could mean more widespread flooding concerns, AccuWeather Senior Meteorologist Brett Anderson explained.

Prior to Nicole, below-normal rainfall since the beginning of October has left soil conditions dry across portions of West Virginia, eastern Ohio, western Pennsylvania and New York. Cities like Youngstown, Ohio, and Pittsburgh have recorded only about 2 inches of rain since Oct. 1, which is about 50% of normal for that timeframe. Central New York has been even drier with meager rainfall amounts. For instance, Syracuse has picked up only 1.45 inches of rain since Oct. 1, or 29% of normal. 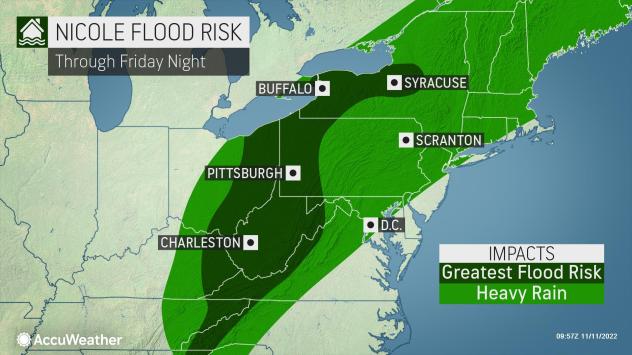 The abnormally dry ground is less likely to absorb rainwater from such intense tropical downpours. A couple of inches of rain in just 6 hours' time could be enough to cause flooding.

"The most likely zone for rapid flooding of small streams will be over the Appalachians and into parts of the Ohio Valley as much of the storm's intense rainfall can occur in six to 12 hours," AccuWeather Senior Meteorologist Alex Sosnowski said.

As the end of the fall foliage season has arrived, the ground could be littered with more leaves. The fallen leaves could clog storm drains, leading to some localized flooding issues in urban areas. 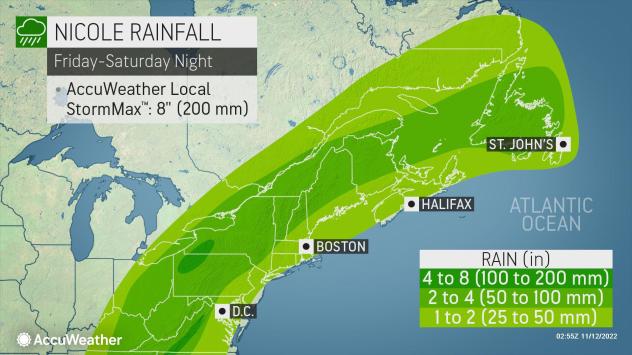 In the zone east of Washington, D.C., to Philadelphia and northward to cities such as New York, Hartford, Connecticut, and Boston, downpours are likely to produce lesser rainfall amounts of an inch or two. On top of that, a surge of warmth and humidity in this corridor will bring an increased risk of severe thunderstorms, as AccuWeather Senior Meteorologist Dave Dombek warned earlier this week.

With Nicole's track well inland, Dombek explained that thunderstorms erupting in the Interstate 95 corridor on Friday and Friday night could be potent enough to bring damaging wind gusts.

The risk of severe weather extends from cities like Raleigh, North Carolina, and Richmond, Virginia, to as far north as Albany, New York, and Springfield, Massachusetts, and as far west as Harrisburg, Pennsylvania, and Binghamton, New York. It is not out of the question that a few isolated tornadoes or waterspouts occur from the eastern Carolinas to Maryland, Delaware and southern New Jersey. 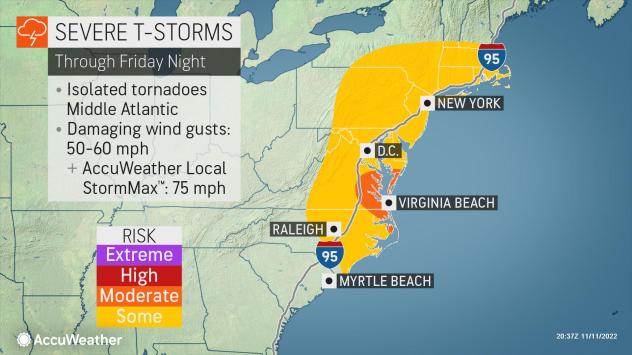 The most widespread impact from Nicole is expected to be heavy tropical rainfall that focuses north and west of Interstate 95, through the Appalachians and can extend into parts of the Ohio Valley and eastern Great Lakes region. However, Nicole will also bring the threat of gusty winds to a different zone of the Northeast.

Soaking rain overspread the New York City area during the midday hours and will ramp up through the afternoon.

"Torrential downpours and strong wind gusts with locally severe thunderstorms are likely during the afternoon rush hour on Friday around New York City," AccuWeather Meteorologist Dean DeVore said. "After dark, another round of heavy rain with thunder is likely with wind gusts strong enough to knock over trees and trigger sporadic power outages." 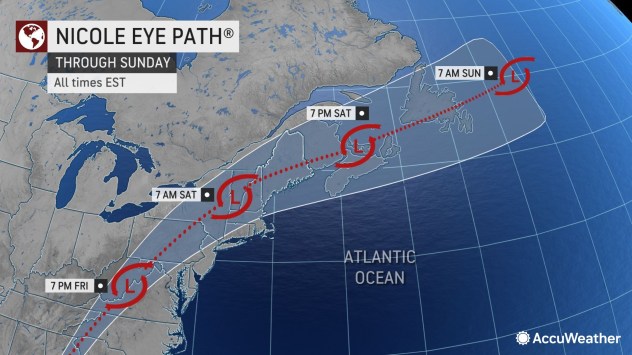 Once Nicole moves into the mid-Atlantic, the strongest wind gusts are most likely to the east of the storm. Coastal locations will be particularly prone to wind gusts in excess of 40 mph for at least a 12-hour period.

The wind direction may change depending on Nicole's exact track, but an easterly or southerly wind is likely to hit beaches and inland bays from Virginia and Maryland to southern Maine for perhaps as long as 24 hours. The long duration of these winds can lead to above-normal tides, coastal flooding and beach erosion into the weekend. These impacts could be most extreme at high tides on Friday as well as Saturday morning in Atlantic Canada.

"The projected track of the storm will favor more of a southeast wind along the coast as opposed to a northeast wind. So, coastlines that are facing south or southeast will be hit harder than those facing northeast or north," explained Dombek. 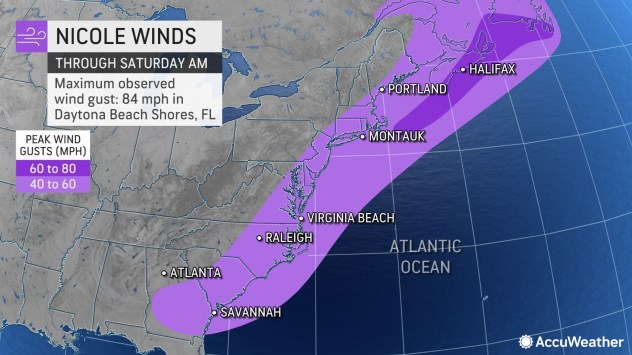 As Nicole intensifies and merges with the non-tropical storm toward the weekend, wind gusts of 60-80 mph (100-130 km/h) could spread across parts of Nova Scotia and the island of Newfoundland.

High temperatures early next week are likely to be as much as 5-10 degrees below normal for mid-November and to stick around through much of next week.

The historic hurricane that unleashed a blizzard