Isaias explodes into hurricane overnight, to make run along southeastern US coast

Isaias has formed, but where is it headed?

Bernie Rayno says there is a "fork in the road" that will determine the storm's future track and intensity.

Tropical Storm Isaias lashed Puerto Rico with 60-mph winds and heavy rains and made landfall in the Dominican Republic Thursday afternoon. The storm brought impacts to Haiti, the Dominican Republic's neighbor on the island of Hispaniola, also as it pushed northwest over the Caribbean. Forecasters expect Tropical Storm Isaias to take a northwesterly path roughly between Cuba and the Bahamas late this week, before taking a potential track right along the Eastern Seaboard of the United States.

Tropical Storm Isaias, pronounced ees-ah-ee-ahs, was upgraded from Potential Tropical Cyclone Nine status by the National Hurricane Center (NHC) at 11 p.m. EDT Wednesday. The system strengthened as it developed a more organized center with thunderstorms wrapping around its core -- and, with its upgrade, Isaias became the earliest "I-storm" in recorded history. The prior record holder was Irene from Aug. 7, 2005.

Isaias could become the second named system to make landfall in the U.S. in about a week following Hanna's arrival in South Texas on Saturday, July 25. 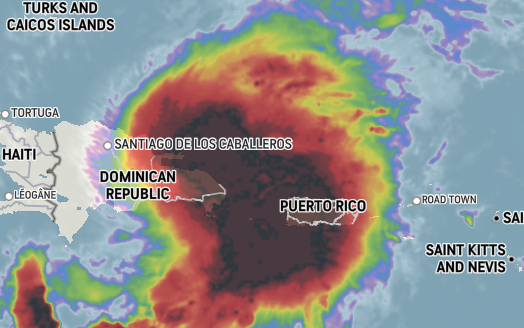 "There is a chance that Isaias may make landfall over the Florida Peninsula this weekend, although the possibilities of tracks range from a path into the eastern Gulf of Mexico to a near-miss or glancing blow along the southern Atlantic coast of the U.S. into next week," AccuWeather Senior Meteorologist Rob Miller said.

During Thursday midday, Isaias was churning right along the southern coast of the Dominican Republic with maximum sustained winds of 60 mph and was racing west-northwestward at about 20 mph. Isaias's winds knocked out power to 300,000 people in Puerto Rico as of Thursday morning, where nearly 9 inches of rain led to incidents of flash flooding and landslides, according to The Associated Press. The tropical storm was about 85 miles to the southeast of Puerto Plata, Dominican Republic. The center was crossing the island of Hispaniola, which consists of the countries of Haiti and the Dominican Republic, and is likely to emerge along the northern coast of the island during Thursday evening.

Miller cautioned that people should not focus on just the eye path given the sweeping size of Isaias. Tropical-storm-force winds extend outward by about 310 miles from the center on the storm's northeastern, northern and northwestern flanks. When compared to that of tiny Gonzalo from last week, the tropical-storm-force winds extend farther out from the center by 285 miles. 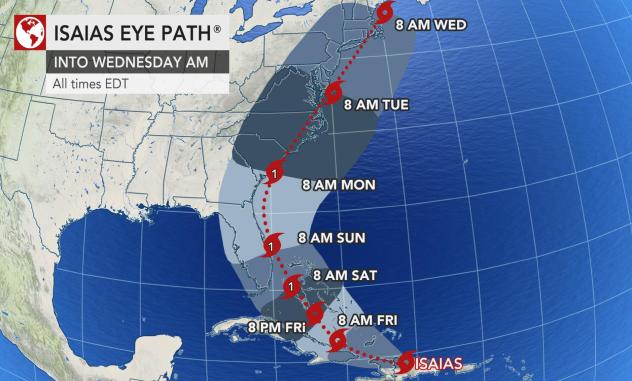 Torrential downpours, gusty thunderstorms and building seas are likely to precede Isaias by as much as 24 hours, which means that tropical storm conditions will spread northwestward across the Bahamas and Cuba during Thursday night, Friday and Saturday and should begin in Miami during Friday night or early Saturday morning. Tropical storm conditions could then spread across the state over the weekend. Adding onto this, the system is racing along at approximately twice the average speed of tropical systems for this area of the basin.

All interests from the Dominican Republic and Haiti to Cuba, the Bahamas, Bermuda, the eastern U.S. and Atlantic Canada are urged to monitor the progress of Isaias. 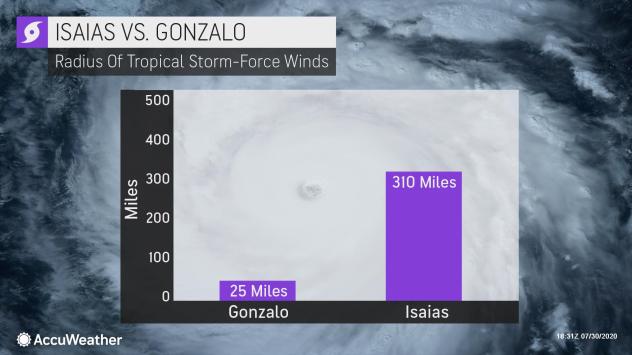 Isaias is forecast to be a 1 for the Bahamas on the AccuWeather RealImpact™ Scale for Hurricanes, a more nuanced method the company introduced in 2019 to assess the potential damage a tropical system could cause, across the northern Caribbean into Friday and the southeastern U.S. this weekend. As Isaias curves north and approaches the Carolina coast, it is also forecast to be a one on the AccuWeather RealImpact™ Scale. 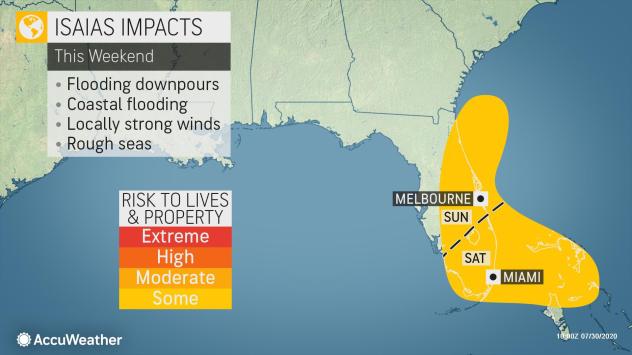 Isaias is expected to become a Category 1 hurricane later on Friday as it moves into the Bahamas, hitting the warmer waters after trudging its way through the Hispaniola mountains, which are a major hurdle for tropical systems.

"We will see this come off Hispaniola as a strong tropical storm and with it moving over the warm waters of the Gulf Stream between Cuba, Florida and the Bahamas, this will help to intensify the storm and likely become a hurricane," AccuWeather Senior Meteorologist Alan Reppert said. 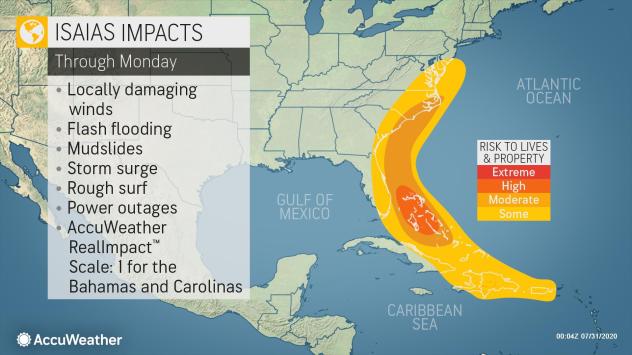 As Isaias approaches North America, a non-tropical system associated with a dip in the jet stream located over the U.S. will likely influence its movement and strength.

"We sometimes see jet stream troughs like this draw tropical systems closer in to the U.S., rather than drive them away," AccuWeather Chief Broadcast Meteorologist Bernie Rayno said. 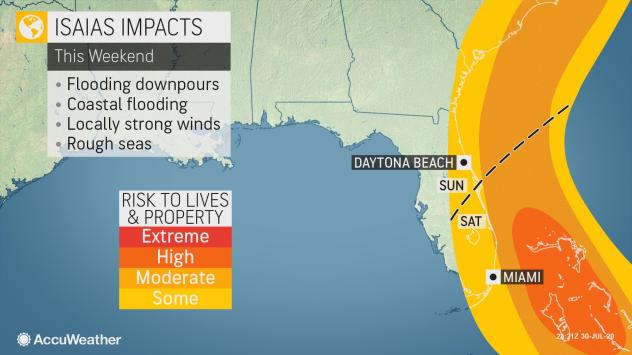 The fast-forward motion of Isaias should limit the overall amount of rain, but there can still be incidents of urban flooding in the Bahamas, parts of Cuba and from Florida to the Carolinas. In these areas, from 2-4 inches of rain may fall with locally higher amounts, but precipitation amounts will be influenced by the storm's path. A track farther to the east would bring less rain to the U.S. and Cuba and more rain to the Bahamas, for example. 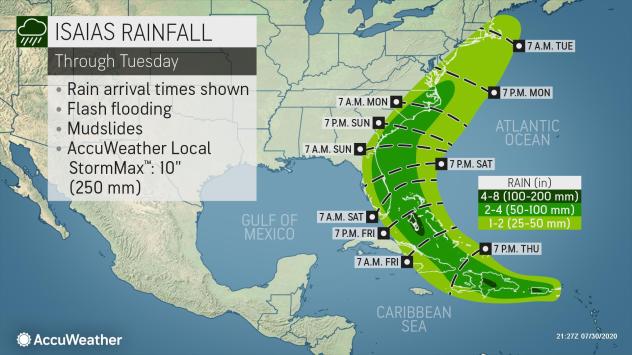 Wind gusts of 60-70 mph can occur across eastern Florida, with higher gusts of 80-90 mph expected across the northwestern Bahamas. An AccuWeather Local StormMax™ wind gust of 100 mph is possible over the northwest Bahamas.

Florida is one of the states that has been experiencing a tremendous surge in coronavirus cases over the last month. On Wednesday, the state reported 253 COVID-19 fatalities, the third daily death record in a row, according to the Orlando Sentinel. The state has had over 6,300 deaths since the pandemic began, data from the John Hopkins University shows. 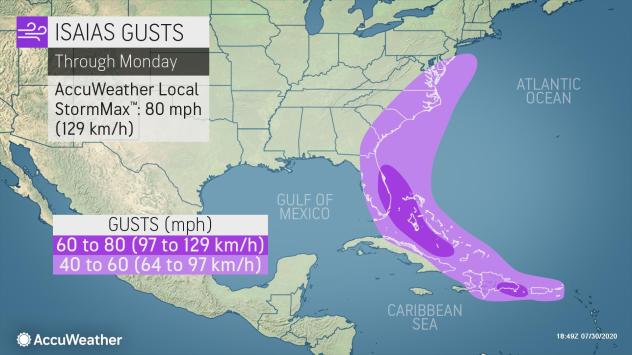 With the potential for a strike by a tropical storm looming, health officials in Collier County, which encompasses Naples on the state's Gulf Coast, announced Tuesday that two testing clinics would be shut down ahead of Isaias. A walk-up testing site in Immokalee will close down on Thursday, and one in Naples will be shuttered on Friday, officials said on Twitter. Thursday evening it was announced that state-supported COVID-19 testing sites in a handful of counties including Escambia, Polk, Sarasota and Leon would remain open. Meanwhile, Florida Gov. Ron DeSantis on Wednesday urged Floridians to "prepare now by having at least 7 days of disaster supplies" on hand.

The name Isaias was added to the Atlantic list after Ike caused destruction in Texas in 2008 and was retired in 2009. It has not yet been used.

AccuWeather's top hurricane expert Dan Kottlowski issued an update to the numbers of tropical storms and direct impacts to the United States for the Atlantic season this week. He warned that the tropics could become "hyperactive" as the heart of hurricane season nears, and that one area in particular should remain "very vigilant" of the pattern setting up. 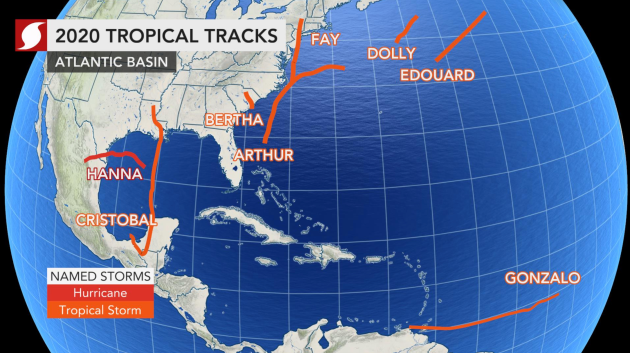 A map shows the eight tropical systems that have developed in the Atlantic basin in 2020 so far and the tracks they took prior to the formation of number nine, Isaias, Wednesday night, July 29, 2020. (AccuWeather)

Six of the nine tropical storms thus far in 2020 have set new records for early formation for their respective letters in the basin -- Cristobal, Edouard, Fay, Gonzalo, Hanna and Isaias -- and more are likely to fall as the season progresses, according to forecasters. The "J-storm" record is currently held by Jose on Aug. 22, 2005, with the "K-storm" record held by the infamous Katrina, which formed on Aug. 24, 2005.

The 10th and 11th names on this year's tropical list are Josephine and Kyle. For more names on the 2020 Atlantic list and all tropical weather information, please visit the AccuWeather hurricane center.