Hurricane Larry won't be coming any closer than about 800 miles to the East Coast of the United States, AccuWeather forecasters say, but on Thursday the monster storm was already making its presence felt, stirring up dangerous waters off the beaches up and down the Eastern Seaboard and coming ominously closer to Bermuda.

Larry is expected to deal a glancing blow across Bermuda as dangerous seas and surf continued to radiate outward toward the East Coast of the U.S. AccuWeather forecasters expect parts of Atlantic Canada to take a head-on hit from Larry, which will remain a massive storm, with either a dangerously close approach or direct landfall.

Larry was downgraded to a Category 1 hurricane Thursday, just one day after it was a Category 3 storm. Maximum sustained winds were 90 mph (150 km/h) on Thursday. The hurricane was churning 190 miles (305 km) east-southeast of Bermuda and moving north-northwestward at 16 mph (26 km/h). A tropical storm warning was in effect for the islands of Bermuda.

Satellite images showed that the monster hurricane was not only large in size, but its eye was also rather large and menacing. Hurricane-force winds of 74 mph or greater extend outward up to 90 miles (150 km) from the center of the massive storm. Winds of tropical storm force, 39 mph (63 km/h) or greater, extend outward to 220 miles (350 km). 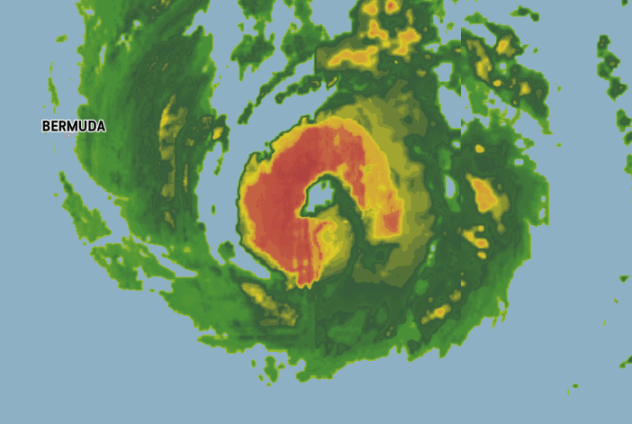 Hurricane Larry was spinning a couple of hundred miles east-southeast of Bermuda on Thursday morning, Sept. 9, 2021. Its eyewall was visible on Bermuda's radar. (AccuWeather radar)

The eye of Larry was about 60 miles (97 km) across Tuesday morning, but it was even bigger, close to 70 miles wide, Sunday. To put that in perspective, the width of Florida at Miami's latitude is about 75 miles across. As Hurricane Ida approached the Louisiana coastline as a Category 4 storm more than a week ago, its well-defined eye was 17 miles wide.

Larry will continue to move northwestward and then take a turn more toward the north over the Atlantic this week, and large swells will continue to propagate outward from the hurricane's core.

As these swells reach shallow waters of the U.S. East Coast, large breakers and dangerous rip currents will result. With limited lifeguard coverage after Labor Day weekend, beachgoers are strongly urged to heed advisories from local officials. The storm also has the potential to disrupt maritime operations across the Atlantic. Cruise ships and trans-Atlantic shipping vessels along with those operating offshore fishing boats were urged to monitor the progress of the hurricane. 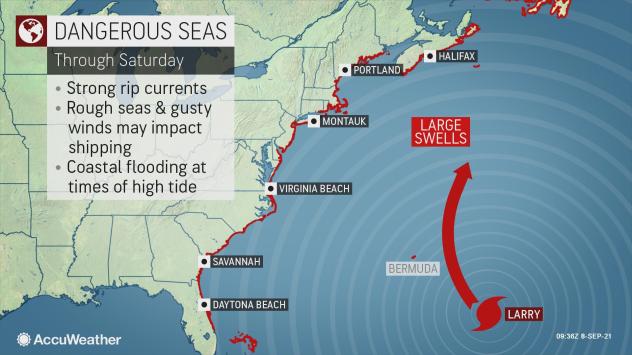 "Larry is forecast to pass about 200 miles to the east of Bermuda on Thursday, but some outer fringe rain and winds are likely to brush the islands," AccuWeather Senior Meteorologist Adam Douty said.

Larry has been rated as less than 1 on the AccuWeather RealImact™ Scale for Hurricanes. Tropical storm conditions with rough seas and surf and sudden, drenching squalls began Wednesday night and are expected to continue into Thursday on the islands of Bermuda.

Waves will pound unprotected coastal areas of Bermuda with overwash potentially leading to coastal flooding. Waves will first impact the east- and southeast-facing shoreline into Wednesday then shift to the north- and northwest-facing shoreline Thursday as the hurricane passes by to the east.

Winds are forecast to gust between 30 and 50 mph (48 and 81 km/h) on the islands with an AccuWeather Local StormMax® gust of 60 mph (97 km/h) possible. Any issues from wind are likely to be minor and generally limited to sporadic power outages. Most structures on Bermuda are built to withstand the impacts of a direct strike from a significant hurricane.

Rainfall is forecast to generally be light -- on the order of an inch or less -- with the glancing blow from Larry on the islands. 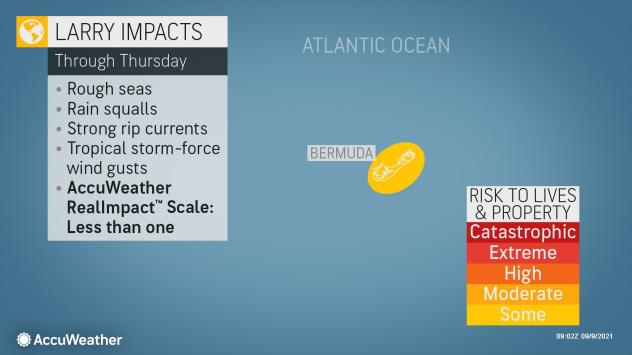 Beyond Bermuda, the next land area in the storm's path is Newfoundland, Canada, which juts out into the Atlantic. Larry's forward speed will increase as it approaches the region, and the storm will slowly begin to weaken as it moves over cooler water.

During Newfoundland's encounter with Larry, the system is forecast to hit with the intensity of a Category 1 hurricane with maximum sustained winds of 74-95 mph (119-153 km/h), regardless of official classification of tropical versus non-tropical by the National Hurricane Center (NHC).

With Larry forecast to impact Newfoundland, the Canadian Hurricane Centre had already issued Hurricane and Tropical Storm watches for southeastern Newfoundland as of early Thursday morning. 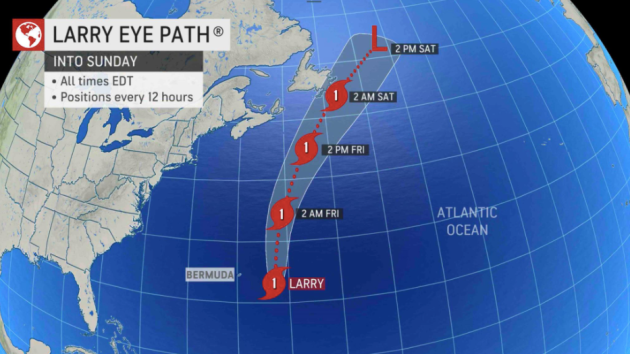 Wind gusts of 80-100 mph (129 - 161 km/h) and an AccuWeather Local StormMax™ of 110 mph (177 km/h) are possible over a small area near where Larry makes landfall. Winds this strong can cause significant property damage, topple numerous trees and lead to widespread power outages.

Larry is forecast to interact with an approaching cold front, which can enhance rainfall to some extent, Anderson said. 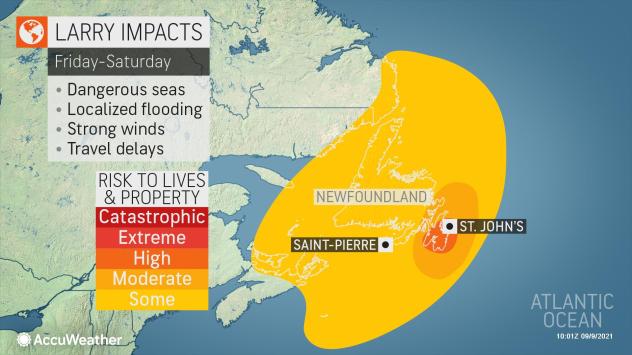 "Much of this rain may fall in a 6- to 12-hour time frame and is likely to trigger flash flooding, mudslides and road washouts," Anderson warned.

This region of Canada is no stranger to hits from the tropics.

"Newfoundland has been the target of nearly three dozen named tropical systems since 1950, although most were downgraded to extratropical systems by landfall," said AccuWeather Senior Weather Editor and Meteorologist Jesse Ferrell. AccuWeather refers to these systems as tropical rainstorms due to the ongoing potential danger and damage due to not only heavy rain, but also strong winds.

"The most recent direct hit was from Leslie in 2012, but that system was downgraded from a hurricane to a tropical rainstorm before landfall," Ferrell said. 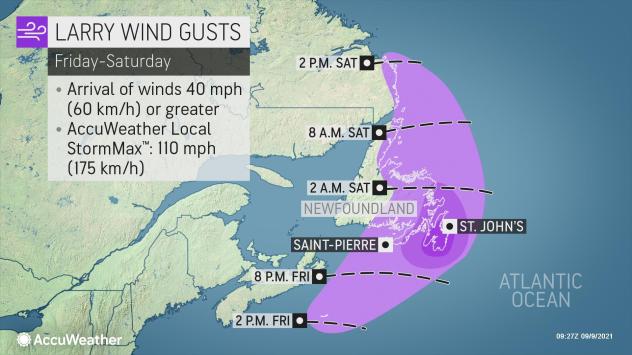 The last tropical system to hit officially as a hurricane was Igor in 2010. Damage from Igor in Newfoundland was estimated at $200 million at the time, which made the storm the costliest in the province's history. Much of the damage was due to washed-out roads from as much as 10 inches (250 mm) of rain that fell.

Larry's long duration as a major hurricane has greatly influenced the Accumulated Cyclone Energy, or ACE, for the 2021 Atlantic hurricane season, and it's likely to continue to do so in the coming days. ACE is a measure that meteorologists use to examine the intensity of all tropical storms and hurricanes over their entire duration. 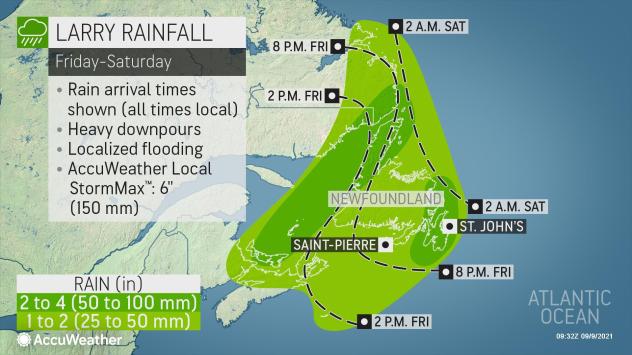 Besides Larry, there are other areas in the Atlantic basin that AccuWeather meteorologists will be monitoring for tropical development over the next several days, including Tropical Storm Mindy which quickly developed in the Gulf of Mexico on Wednesday afternoon. Mindy made landfall Wednesday evening at 9:15 p.m. EDT over St. Vincent Island in the Florida Panhandle.

Mindy will bring torrential rain and the risk of flooding to the northeastern Gulf Coast area as well as part of the southern Atlantic coast, before it loses wind intensity as it moves into the western Atlantic this weekend.