A historic, multi-year drought is ravaging parts of two war-torn countries, leaving millions at risk of losing access to food, water and electricity.

Syrian Kurds are reviving a decades-past rain ritual in the northern city of Qamishli as the country deals with record-low rainfall.

As a multi-year drought worsens across war-torn Syria and neighboring Iraq, residents in northeastern Syria revived a decades-old tradition in the hopes of boosting rainfall, which would provide drought relief.

The ancient ritual that has been revived across northern Syria is known as the "Bride of the Rain" and involves a wooden doll being dressed in colorful fabric and paraded through the streets. The doll is sprayed with water while people recite special prayers, according to the AFP.

The "Bride of the Rain" ritual had largely disappeared in recent decades, AFP reported, but the ancient custom has re-emerged as the drought across Syria and Iraq grows and threatens crops, livelihoods and leaving people in the region desperate for rain.

"We had abandoned this tradition a long time ago but we restored it in the past two years… due to severe drought," Farhan Ahmad, who owns farmland in the region, told AFP.

A long-lasting drought across the region intensified during 2020 and 2021 with the amount of rainfall measured across much of the country being well below normal. In addition to the lack of rain, temperatures have been trending above normal during the last few years, which has intensified the drought.

"The total collapse of water and food production for millions of Syrians and Iraqis is imminent,” Carsten Hansen, regional director for the Norwegian Refugee Council, said in a press release back in August. “With hundreds of thousands of Iraqis still displaced and many more still fleeing for their lives in Syria, the unfolding water crisis will soon become an unprecedented catastrophe pushing more into displacement.” 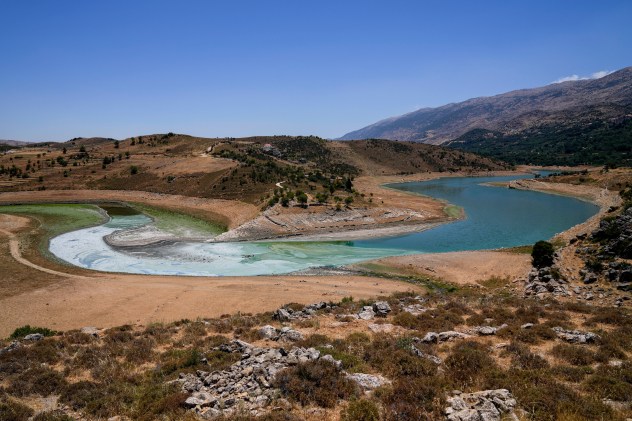 Millions of people in Syria and Iraq are at risk of losing access to water, electricity and food amid rising temperatures, record low water levels due to lack of rainfall and drought, international aid groups warned Monday, Aug. 23, 2021. (AP Photo/Hassan Ammar)

It is estimated that more than 12 million people in the two countries are in danger of losing access to water, food and electricity.

Water in reservoirs is running out and several hydroelectric dams in northern Syria are in imminent danger of shutting down. The dams supply power to about 3 million people.

In northwestern Syria, the reservoir formed by Al-Duwaysat Dam ran dry this summer for the first time in its 27-year history, according to AFP. About 800 families use the reservoir for irrigation across 370 acres of farmland.

Much of northern Syria received less than half of its normal rainfall in 2020 and 2021 after above-average rainfall fell across the region during 2018 and 2019.

"The Indian Ocean Dipole, which measures temperatures anomalies across the Indian Ocean, was strongly positive in 2019 which brought warmer water into the western Indian Ocean," explained AccuWeather Senior Meteorologist and Lead International Forecaster Jason Nicholls. "This, in turn, brought more moisture across the region and changed the overall weather pattern to bring some of the heaviest rainfall seen in years."

As much as two-to-three times the region's normal rainfall fell during 2019, which provided temporary relief from the drought. However, conditions have since turned dry once again.

Another factor behind the drier conditions across the region could be attributed to large-scale climate changes.

Winter is typically the wettest time of the year across Syria and Iraq, according to Nicholls. While there will likely be several rounds of rain across the region during the next few months, there are no strong indications that the drought will break anytime soon.